Wot's a nice, straight all-American dude reading about the London gay scene some seventy years ago? I just finished Fires of London, Janice Law's novel about the mid-1900s English/Irish artist, Francis Bacon (not the Elizabethan logician, philosopher and essayist, nor other historical figures). 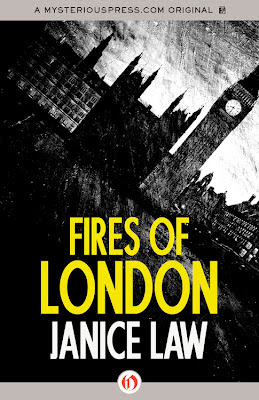 Fires of London draws upon art, poetry, history, mythology, and the classics. The author is a literary architect. She builds meticulously, syllabically brick by brick, painting the backdrop, sketching the characters, scene by scene, so the reader sees the novelistic theme park, not the girders underpinning it. The reader feels the protagonist's asthma, fear, bravery, and reluctant persistence to learn who's committing murders in the midst of the gay community.

The author is not one to flaunt her intelligence and knowledge, giving the story a natural feel. Nor does she belabor drollery. The humor is sly and understated, including makeup advice to Francis to "keep your powder dry." When Francis needs to ditch evidence, his Nan picks his pocket and says "Dear boy, leave everything to me." Francis comments about boys in the rough trade, "I'm not one to leave hard feelings behind."

London town is real, palpable. The description of the Blitz is riveting. What I know about the gay scene you could fit in a teacup, but it feels true. You may think this isn't the kind of world you'd inhabit, but it's impossible not to connect.

In the latter chapters, the emotional roller coaster moves from angst, to spookiness, terror, anger, vindication, sadness for one of the characters who made Francis' life miserable, and finally a feeling of satisfaction.

Who could ask for more?

Defy the heat. Fires of London is available 4 September from Mysterious Press.
Posted by Leigh Lundin at 00:00