The Fires of London 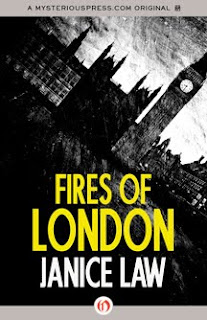 I have a book coming out tomorrow, September 4, from Mysterious Press, the first time I’ve issued a novel in eBook form. The Fires of London is set during the London Blitz and uses the Anglo-Irish painter, Francis Bacon, as the detective.

Leigh asked me to write about constructing The Fires of London and about the research involved, but, though he is too polite to put the question, I think he really wanted to know how a reserved, virtually teetotaling old lady from rural Connecticut, who, incidentally, just celebrated her fiftieth wedding anniversary, came to write about that gay, promiscuous, thoroughly urban, alcoholic genius, Francis Bacon.

Well might he ask! I’ve certainly asked myself the same question, but the Muse has her reasons, and I’ve found it unwise to reject anything she offers. Besides, after a little thought and research, I discovered that FB and I share a good deal more than might be evident on the surface.

But first the Blitz. Among my earliest memories is a great distaste for news broadcasts. Since I was only a toddler I cannot have understood the bulletins but only reacted to the concern and distress of my parents, Scottish immigrants anxious about relatives in Aberdeen, Glasgow, Fife, and points south in England. My other early memory is the big cardboard boxes which were shipped back to the old country during, and for years after, the war, containing coffee, chocolate, various other foodstuffs, wool, clothing, and even garden seeds to replace a blown up allotment garden in Aberdeen.

Later I visited the Imperial War Museum in London and did extensive WW II research for a novel about an SOE agent who was active in France. That background, plus the ever helpful web, with its pictures of barrage balloons and ARP clothing and various sites with memoirs of folk who lived through the Blitz, did the rest.

Just the same, what about Francis? Ah, well, I hesitated. But however rackety FB’s life, he was apparently up and in his studio by 6 or 7 a.m. He was a worker; I approve. Art was his lifeline and his earthly salvation. I drew well before I could read and write, and the visual world has been a constant source of interest and delight. In many ways, drawing and painting have always been the way I comprehend the world.

Of course, FB was a genius, and I am not, but even leaving his great abilities aside, he was an odd duck. Maybe too odd for me. Then I learned about Nan, his old nanny, whom he lived with until her death. She loved him unconditionally, entered enthusiastically into all his schemes, and, though half blind, went shoplifting for food when they were on their uppers.

This I understood. My mom had emigrated via Canada as a children’s nanny and my parents worked on a big estate. I was a downstairs child of an upstairs downstairs establishment, and I knew a lot of women – all, I must say, far more respectable than Nan – single women whose men folk, or would have been men folk, had been ground up in the First World War. These nannies, governesses, upstairs and downstairs maids, and cooks often had complicated relationships with their employers and, especially, with their employers’ children.

So was a love of painting and a bird’s eye view of the class system enough? I decided it was. Michael Peppiatt’s fine biography, Francis Bacon, Anatomy of an Enigma, various memoirs of people in Bacon’s circle, a fine exhibition in Buffalo of Bacon’s paintings, and some books on gay London recommended by my late university colleague, Hans Turley, gave me the details of FB’s life and information about the milieu in which he thrived.

For the rest, blame imagination. However remote the characters one creates seem, they are all made out of the same cloth, the writer’s own experience and personality. So Francis in The Fires of London is my version of the man, created by flinging imagination over the facts as I understood them and linking my experience to his very different one.

Though the ease with which I have written some peculiar and undesirable characters has sometimes given me pause, that was not the case with FB, whom I frequently disapproved of but whom I grew to like. He was a bundle of contradictions. One friend described him, I fear I paraphrase, as ‘camp as an army base and tough as old boots,’ an unusual combination, maybe, but no more or less complicated than the next person you meet. Tertullian wrote, “ I am a man and I think nothing human is alien to me.” Include my gender and that’s as good a motto for a writer as I can think of.
Posted by Janice Law at 00:01