Notes from the Penitentiary – September 2012

Yes, I'm back from the ever-friendly South Dakota State Penitentiary, after another three day Alternatives to Violence (AVP) Workshop.  This one was training facilitators, i.e., turning outsiders (like myself) and insiders (yes, inmates) into trainers of other outsiders and inmates in the principles of AVP.

Also as always, the food is a criminal offense in and of itself.  Up here in South Dakota, they've outsourced all meals to CBM Managed Services.  Now CBM's website is a masterpiece of literary succulence - "High quality food service programs through utilizing fresh, high-quality foods, tested recipes, planned production standards, preparation practices and comprehensive employee training programs" - but in actuality it looks like dog food. 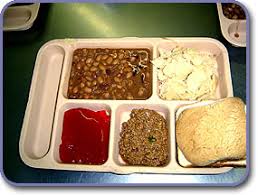 No fruit, fresh or cooked.  Industrial canned vegetables, one scoop per meal (maybe).  (This tray is semi-accurate; take out the red stuff, put in a slab of bread, double up on the brown stuff and take out the beans.)  But hey, it's cheap, and that's what counts. All I can say is that I wouldn't feed it to a dog.  And yes, I have first-hand experience, because we go in at 7 in the morning and get out at 6 at night, and we're not allowed to go out for meals or breaks.  So we share in the dining experience - twice a day - with the prisoners. 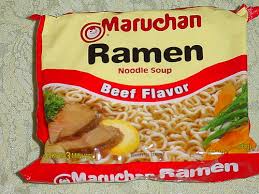 Speaking of food, sort of, Ramen noodles- i.e., "soups" - are still standard currency.  The workshop role play that got the biggest applause was one about an inmate who owed five soups to a storer inmate and couldn't/wouldn't (difference never was determined...) pay.  After considerable talk and a bit of shoving, the local lifer told them all the shut the f*** up.  Eventually he paid up the five soups for the owing inmate, which meant that now that inmate owed the lifer - not necessarily a good thing.  Everyone agreed the inmate needed to pay his debts, and learn who to owe and who not to owe.  I asked the actor (still in character) if he was going to pay the lifer, and he said "maybe," which got a lot of muttered comments from the audience about how he was going to get punked if he didn't.  (Getting punked ranges from getting beat up to rape.)  I agree - he needs to pay his debts. 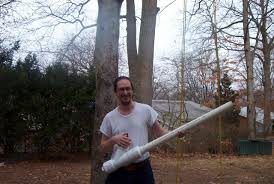 I am always in admiration of the awesome ingenuity of prisoners and their families.  One of the ways to smuggle things into the pen is to have a friend of relative shoot stuffed dead animals over the wall into the yard with a potato gun.  (Proof that reality is stranger than fiction, because I'd never have thought of doing that.  And I don't know anybody on God's sweet green earth that I would do that for...)  Anyway, they stuff the animals with tobacco, cell phones, or drugs, which is why prisoners on the yard are always keeping an eye out for dead squirrels, birds, etc.  So are guards.  I gather it is often a sprint to see which gets there first.

We have workshops in October and November, and we already know they're going to be a bit hairy, and might even get cancelled by the authorities...  There's going to be at least one execution in October or November - Eric Roberts and Rodney Berget, both lifers, killed prison guard Ron Johnson in an escape attempt.  Both have been sentenced to death, and both have either rejected appeals or the appeals have been denied.  (Rodney Berget is continuing a family tradition, in that his brother, Roger, was executed in Oklahoma in 2000.)  Anyway, executions disturb the prisoners (there's a surprise), and the staff (who are worried about the prisoners and how they'll react), and the administration (who double down on security, thus upsetting the prisoners even more).  So the workshops will probably be more emotional and more strained than usual. Will keep you posted.

Meantime, stay out of trouble, and go enjoy a really good meal. I did.
Posted by Eve Fisher at 00:01