Talk about procrastination... I have been meaning to write this one since John Mortimer died  in 2009.  When that news came out I had just written memorials to Westlake and McGoohan and I couldn't bear to write another one.  Then time, as is its habit, slipped away.   But today we have a moment; let's seize it.

John Mortimer was a British barrister turned author, and his greatest creation was Rumpole of the Bailey, a series I  loved before I saw (or read) it, because I knew it was going to star one of my favorite actors, an odd one-eyed Australian named Leo McKern.  I had admired him in Help, The Prisoner, A Man For All Seasons, and a weird movie I saw in college in which he played Socrates in a tuxedo.


Which brings us to one of the oddities of Horace Rumpole.  Unlike just about any other character in crime fiction he is a true hybrid.  There are countless detectives in books, and others who have been created just for the screen, but how many float freely between the two?  Sure, there have been thousands of "novelizations" creating new episodes of TV shows, but I don't think any of them other than Rumpole were written by the same author who created the character and wrote all the TV episodes.  Mortimer provided us with original Rumpole stores for the screen, the page, and even the radio.

But I think most of us agree that Horace's finest incarnation was the aforementioned McKern.  As our own Janice Law said "John Mortimer is a good writer, but I suspect that I am not the only reader to find the Rumpole stories a tad on the thin side without Leo McKern's rotund person and orotund phrasing..."

I have often pondered the attraction of the series.  The plots are, generally, not brilliant.  Often they relied on Rumpole accidentally being in the right place at the right time to notice something he would otherwise not have known.  There were flashes of brilliance: Rumpole's Return and "Rumpole For The Prosecution" both turned on extremely clever clues, for instance.. 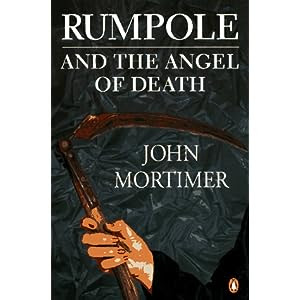 Not surprisingly, Mortimer often reused plot ideas.  (Rumpole defended clergymen three times; in each case the defendant had the same innocent reason for his behavior).  Like many series there was a problem with stretching it out indefintely.  After all, Rumpole was supposed to be an Old Bailey hack who lost more cases than he won.  As years went by he started scoring more and bigger wins, because Mortimer kept finding new dragons in British society and wanted Rumpole to succeed in slaying them.

Mortimer noted that one reason he created the Old Bailey hack was that opinions that would sound dangerously radical from his own mouth seemed charming coming from Horace. (McKern himself was much more  conservative than the character he played, by the way.)    Mortimer's  other reason for creating Rumpole, of course, was for money to see him through his retirement from the bar.

I think it was also a desire for variety that caused Mortimer to send his hack to courts far from the Old Bailey.  Rumpole fought cases before military courts, medical tribunals, medical panels,  an African court (with death penalty on the table), and, least likely of all, even a Church of England investigation of one of those clergymen I referred to earlier.  In one case he was the defendant, in one and one only he worked for the prosecution (inevitably scuttling it).

I suppose it was character that made the series so carming and rewatchable.  Rumpole -- manipulative, vain, stubborn, opinionated - was like so many great characters, a person you would probably want to avoid in real life, but a treasure to watch.  And when he went into the courtroom he was always the underdog and relished the role..

Surely the person who knew him best was Phyllida Trant, "the Portia of our chambers."  In one episode his son suggests that Rumpole should be thinking of retirement because he is "in a hopeless postion, with the judge and police dead against him."  Trant responds "I should think by now, he's just starting to have fun."  (When Trant became a judge Rumpole lamented that she was scrupulously fair, which was the worst thing in the world for the defense, since it deprived the jury of a reason to side with the defendant.)

Another attraction of the series was the language: the jargon of the other barristers and government officials versus the flowing phrases and quoted poetry of our hero.  Rumpole often noted "the Golden Thread" thar runs through British justice:"the immutable principle that everyone is innocent unless twelve good men and women and true are certain that the only possible answer is that they must be guilty."  But he also noted that there is another such thread: "Rumpole presumes every case to be winnable until it's lost!"

And perhaps it is that spirit of defiance, personified by McKern, that kept us watching so long.
Posted by Robert Lopresti at 00:01