Three weeks ago, we brought you the story about Trayvon Martin's death when it was an early local issue. Since then the story has made national, even international headlines. The Reverend Jesse Jackson flew in and Friday the Reverend Al Sharpton called for 'action' and a boycott.

Our local NAACP has declined Sharpton's 'action' and boycott, thank you very much. We have a new prosecutor, the 11-month police chief stepped aside, and a majority of folks– including white folks– believe Trayvon Martin was terribly wronged.

Here's what most people don't know: Someone other than George Zimmerman is ultimately responsible. 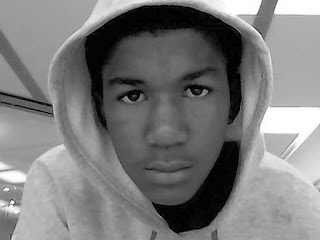 Shoot from the Lip

To be sure, radio wing-nuts assert we don't know how frightened and brave Ward Captain Zimmerman was to face an unarmed kid, and a gun group is advertising a George Zimmerman defense fund. Zimmerman's father claims we don't know all the facts and Zimmerman's brother made wild accusations that Martin grabbed the pistol and screamed "Tonight you die," which doesn't seem to fit known facts. We learned Zimmerman's magistrate father may have intervened on the side of his son in earlier arrests.

Worse, far-right sites such as StormFront have taken to defaming the teenager, falsifying photos and a police record. Yes, Trayvon was tattooed– with praying hands and a tribute to his grandmother.

In contrast, Trayvon's brother appeared level-headed and honest to a fault, saying he couldn't be certain if the screams heard on recordings are Trayvon or not. For the record, the Orlando Sentinel hired experts who, using two different technologies, demonstrated the screams weren't Zimmerman's.

Trayvon wasn't perfect, but we know that night the teen was innocent. That evening, he did nothing more wrong than buy tea and candy then walk home chatting with his 16-year-old girlfriend on his cell phone. The two had spent 400 minutes (6 hours 40 minutes!) chatting that day before the phone was knocked aside. Minutes later, he was killed mere meters from his house. [Note: We now know Rachel Jeantel was 19 and didn't consider herself a girlfriend.]

I'm not here to demonize the shooter, much as I believe he caused a tragic death. Although Sanford's police department has had problems, I'm not sure we can focus blame on police. Why? If prosecutors refuse to prosecute, how can police jail the accused? And according to detectives, police wanted to arrest George Zimmerman but prosecutors refused.

Certainly investigators made mistakes, beginning with not dispatching a homicide detective to the scene and accepting the word of George Zimmerman without question. They did not test Zimmerman for drugs or alcohol, violating standard procedure. They uncritically accepted recorded screams were the killer's, not the victim's. They stated neighbors' stories conflicted with 'known' evidence. They refused to release the 911 calls until forced to by attorneys.

But in the end, their hands were tied. Why? You're about to find out. I'm going out on a limb and say another man is more responsible for not only Trayvon Martin's death, but the murder of dozens of other Floridians.

This man's name is Durell Peaden of Crestview, Florida, a former state senator, the genius behind 776.013§3 that gives Floridians the right to kill with virtual impunity, a law that tripled the number of 'justifiable homicide' killers set free, jumping from an average of thirty-four a year to more than a hundred. The lobbyist behind the law was NRA's Marion Hammer who argued Floridians needed more than a right to carry a weapon, they need the right to use it pretty much at will.

In 2005, our Sunshine State pioneered a law called 'Stand Your Ground', also called 'Never Retreat', 'Shoot First', 'License to Kill' and, according to Tallahassee State Attorney Willie Meggs, 'that stinking law'. This testosterone-powered statute supplanted the common (and sensible) 'castle doctrine', which gave people the right to defend their homes. Sneering at what they called 'the Brady bunch', the NRA claimed the new statute was needed to prevent authorities from harassing law-abiding citizens with petty arrests.

It's not a 'pro-gun' law nor are the law's opponents anti-gun, although politicos on both sides may argue otherwise. The new statute legalized an aggressive never-back-down philosophy. It says you don't have to walk away from a confrontation. It says you have the right to solve problems with a gun or a baseball bat or a knife or an ice pick.

With impunity, it allowed a man to kill another in a playground argument over a skateboard– literally. It allowed a homeowner to legally shoot an inebriated man who knocked on the wrong door and asked for a light. Alcisviades Polanco walked after fatally stabbing another in the head with an ice pick. Numerous avoidable bar fights have needlessly ended in death… and without penalty.

Six months ago, Judge Richard Oftedahl of the 15th Judicial Circuit dismissed all charges against Michael Monahan, charged in a double homicide and facing the death penalty. Monahan walked after shooting two unarmed men from a distance of twenty feet, men who never laid a hand on him.

This bill was strongly opposed by law enforcement, prosecutors, liberals and conservatives alike, although it appealed to excitable wing-nut elements. Since its inception, as many as twenty-four states copied it.

Its first five years saw nearly a hundred claims of use with more than two-thirds resulting in death. The vast majority of these homicides were excused by prosecutors or, in cases where prosecution actually occurred, given a pass by the courts.

Those favoring the law declare it a great success with fewer people clogging the courts. Victims like Trayvon Martin might argue otherwise. Many of the cases have only two witnesses… one who winds up dead.

Police and prosecutors tried to warn legislators about the predictable effects of the law, but lawmakers blew off their concerns, seduced by NRA donations and that exciting chance to kill a human being. Sadly, they're not the ones paying the price.

For the record, if you think I'm letting George Zimmerman off the hook or if you think I'm opposed to gun ownership, then you've misread the article. What I'm for is common sense which is sadly missing in Florida.

One more small thing bothers me. In researching this article, I came across two cases in which Florida courts disallowed the Stand Your Ground defense. In both of those cases, the shooter happened to be… black.
Posted by Leigh Lundin at 00:01