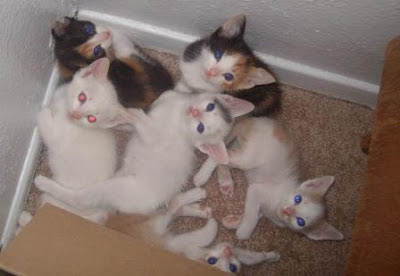 We’ve been a little under the weather, lately, here at the Hill homestead. And, it seems to me some of my fellow SleuthSayers are feeling a bit down too.

So, this week, I’m skipping explosives, and starting the weekend off on a happier note:

My daughter’s cat, Frisky, recently had kittens. So . . . here are a few pictures . . . presented in hopes you can start your weekend with a bit of a smile! 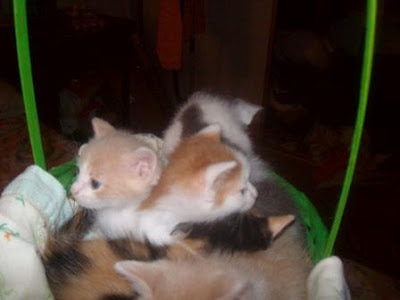 Kittens in a basket, going for a ride. 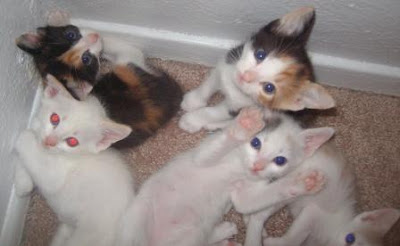 I have no idea who the kitten in the middle is surrendering to. Perhaps it's my son. 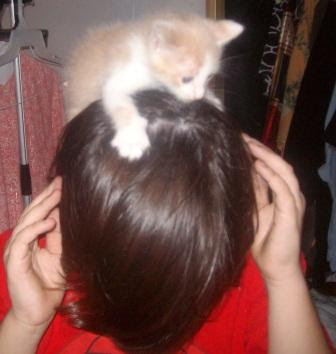 My 9-year-old son, learning why it's not smart to let kittens ride around on your head. 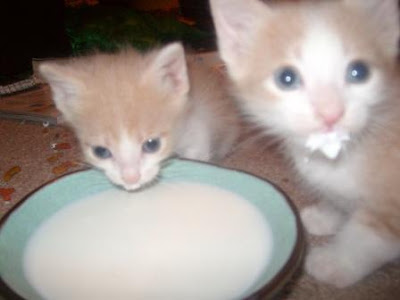 Milk is good. Kittens are messy. 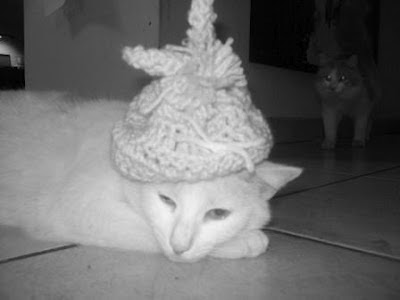 On the left is my daughter's cat, Frisky -- the mother cat. She's wearing a hat my daughter likes (which my wife made). I'll let you be the arbiter of what Frisky thinks of the hat.


“What have kittens got to do with sleuthing?”
Well, I’m glad you asked (even if you didn’t). Because, kittens grow up to be adult cats — such as Koko and Yum Yum, the two Siamese cats of the late Lilian Jackson Braun’s wonderful 29-book series: “The Cat Who …” mysteries.

The series is a soft, character-driven, almost cozy — in which the protagonist, Jim Qwilleran, solves mysteries (often murders) with the aid of his trusty male Siamese “Koko” (more formally named: Kao K'o-Kung). And many little life lessons for writers are contained within the method employed by Lilian Jackson Braun, when she wrote the series.

After writing the third book in the series, she quit.
That’s right; she quit. Her editor insisted she add graphic violence and sex to her books, or they just wouldn’t sell – because sex and violence is what the public wants! — and unless those changes were made, he wouldn’t publish any more “Cat Who …” books. Since Ms. Braun didn’t feel such changes would result in books she wanted to write, she quit writing them. For eighteen years!

At the end of that time, she retired from her position at the Detroit Free Press, and her husband encouraged her to try the series again. The result? A collection of 29 mystery novels and two short story collections.

The lesson: Trust yourself enough to know what you can and can’t (or don’t want to) write.

Braun spent much of her time in South Carolina. And, frankly, having spent time in the Carolinas — during the years when I lived at the whim of my uncle, and home was wherever I hung my barracks bag — I’ve come to the conclusion that many of her more colorful or zany characters were based on folks she knew down there. Braun, however, placed her stories in the far northern reaches of the lower 48, somewhere around the Great Lakes region. This setting provided plenty of woods and sea shore-like beaches, for bootlegging and smuggling stories, which probably had their roots in rumors she’d heard around the inland waterway. In this manner, she could lift the Carolina coast and put it down somewhere far from its actual location, while still maintaining its natural habitat.

The lesson? Feel free to use local color and characters, but give real people the protection of what, in Special Forces, we would have called, “Good cover for status and action.”

What’s a guy who’s supposed to be all hard-boiled doing writing about the Cat Who … series? Well, I first ran across one of them after a taxing deployment. I felt wrung out, used up and exhausted. Upon my return, I discovered that the utilities in my Fayetteville apartment had all been turned off during my absence of several months. This wasn’t unusual, since it’s rather hard to get your electric bill when you’re running around in the jungle somewhere. And, it was often difficult to make prior arrangements; I’d get a call to come into the Team Room, where we’d be promptly locked into “Isolation” for planning our new mission — no contact with the outside world permitted until our return. Thankfully, my apartment complex manager understood my situation. So, my apartment was always left alone, and I simply paid my back rent when everything was over.

But, none of that helps much on a Friday night when your lights and phone don’t work. So, as was my custom, I hit a hotel near the local shopping mall. The women at the front desk knew me, and welcomed me back, understanding that I’d be there until I could get my utilities turned back on the following Monday.

On that particular Friday night, the woman on the desk had just finished reading one of the Cat Who … books. She looked at me as I stood there in filthy BDU’s that probably smelled as if I’d worn them for a week (A day or two in the jungle is all it takes to make a uniform smell like that!) and the como I hadn’t managed to completely wash off my face and hands. “Here,” she said, handing me the book. “You look like you could use this 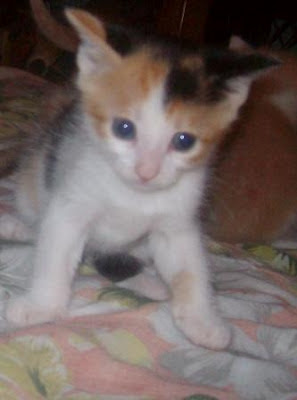 And she was right. I finished it the next morning. And bought a couple more at the bookstore in the mall, then spent the rest of the day reading them as I smoked cigars and drank beer while sitting in a hot bath.

The lesson?? Even steely-eyed snake eatin’ killers, who run around in Girl Scout hats, sometimes need a break from the daily grind.

Hope this post gave you a bit of a break, too!