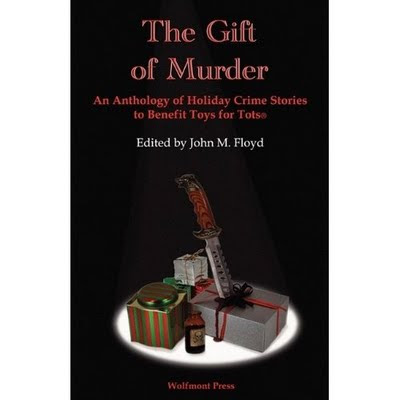 by Deborah Elliott-Upton
'tis the season of stress. The news is filled with greedy shoppers elbowing their way to do hand-to-hand combat for the toy everyone wants this year. Prepared to get the best deal means being armed with pepper spray and perhaps trampling a grandpa in your way. Students are in a frenzy trying to finish up reports and finals before being released for the holidays. Moms are preparing for a return of the kids being home 24/7 with nothing to do but finds new ways to irritate their siblings. Writers are pretty much the same all year with the stress of finding a new twist on crimes as old as mankind.
As I sit safely in my home with little of my own shopping done and a manuscript half-formed in my mind, my thoughts wander to ruthless criminals preparing for their busiest season, too. Unlocked doors have a bounty of gifts under a tree just for the taking. Each burglar's booty will be a surprise present for someone. Identity theft is on the rise and cyberspace is the New Frontier. Every vehicle on the road is ripe for a carjacking experience to spice up the Family Newsletter this year.
Crime is never out of season and mystery writers seem to know that as much as a voracious readership. Mysteries hold a perpetual spot on my personal Want List. Fortunately, I'm not alone.
How many mystery books will be sold this season? With the popularity of e-readers, probably more novels will be downloaded than ever.
A few years ago, I was involved in an anthology of holiday crime stories to benefit Toys for Tots. THE GIFT OF MURDER was the brainchild of Tony Burton of Wolfmont Press. Edited by John M. Floyd, the anthology was a collection of stories by authors you just might recognize: J. F. Benedetto, Stefanie Lazar, Stephen D. Rogers, Anita Page, Randy Rawls, Earl Skaggs, Peg Herring, Bill Crider, Carolyn J. Rose, Elizabeth Zelvin, Barb Goffman, Austin S. Camacho, Sandra Seamans, Steve Shrott, Gail Farrelly, Hershel Cozine, Kris neri, Marian Allen and me. Though we shared the same theme of holiday crimes, the stories -- like the authors -- are vastly different.
My contribution was deemed "disturbing" by one reviewer which made me smile. My intention was to pen a more naughty than nice story this time around.
As for now, I am content to concoct a murder or two, an arson case and maybe a posioning. It really releives my stress.
Posted by Deborah Elliott-Upton at 00:00