by David Dean
I've always liked titles that included 'Confidential' in them.  You know what I mean, titles like "Hollywood Confidential", "Park Avenue Confidential", "Palm Springs Confidential"...well, you get the point.  There's the promise of forbidden knowledge contained within the pairing of almost anything with the word 'Confidential'.  Probably some adult content too, if you know what I mean.
However, the knowledge that I am about to impart doesn't have any of that.  Okay, so it's not forbidden, so how about not particularly well-known...unless you happen to an insider in the small world of Jersey law enforcement?  "What's that to me?" you might ask.  Maybe nothing; maybe a lot, if you happen to set a crime story in the Garden State or have a character that is a Jersey cop.  So wise up and  follow me, if you dare, and remember, no matter what happens, you didn't get this from me.

We do things just a little differently in Turnpike country.  When you're sandwiched between New York City and Philadelphia you've got to do things differently.  It's not easy playing David to two Goliaths, you know.  So here's what we cooked up on the law enforcement front just to keep 'em guessing: In your part of the world I bet they call a major crime a felony, right?  Cross the big line here, sweetheart, and you get slapped with an 'indictable'.  That's shorthand for indictable crime.  That's what they're called here; it's how it's written in the law books.  And you can keep your misdemeanors to yourself, too, while we're on the subject; try one of those on and we'll write you up for a 'disorderly persons offense'.  That's got more words but is easier to spell.  Makes it better, I think.  And this doesn't just stop with legal violations: We have county prosecutors in Jersey instead of district attorneys.  Okay, so maybe it doesn't roll off the tongue as trippingly as, "Hey Chief, you've got the D.A. on line one," but it is different; kinda homey, and that's they way we like it.

But all that is just words; let's go over a few details on how we get things done.  Here in the "Cockpit of the Revolution" the police are prohibited from going through the garbage you just put out at the curb for pick-up.  In order to accomplish that which your refuse collector, or any other passer-by, may do with impunity, we must obtain a search warrant.  We are not completely unique in this restriction, believe it or not, as our sister state of Hawaii has a similar, cutting edge, law on the books.

Let's say that you just got arrested for driving while under the influence (DWI, we call it; not DUI...yeah, you heard me...DWI).  Let's further posit that you are newly arrived from Kyrgyzstan and are therefore ignorant of the English language.  This will not save you from being read your rights.  The Great State of NJ has thoughtfully provided a website that provides a reading of said rights in any of fifty foreign tongues.  This is the wonder and majesty of Trenton.  Of course, if you happen to be from Kyrgyzstan this may be the first time you've ever had any rights given to you in the first place. 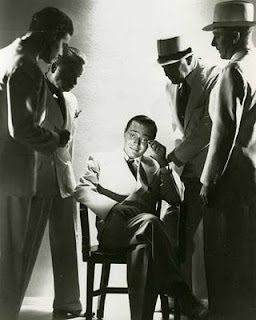 In order to protect the innocent, or at least the not-guilty, NJ further insists that all interrogations for indictable crimes be videotaped.  The cozy chats that we once enjoyed with our clientele are sadly a thing of the past.  Oh for the days before all this invasion of privacy.

Let me give you a scenario: We'll say that you're a uniformed officer on patrol.  You roll up to a stop at an intersection and look to your left.  "What lo?" says you, as Tommy Sunshine comes strolling along; fixes his wee beadies upon your stalwart visage; then turns on his heel and boogies for all he's worth in the opposite direction.  'This cannot bode well for the safety of our citizens,' you thinks.  'Pursuit?' you asks yourself.

Finish that vente latte, brother...you got nothing.  Not here in the Garden State.  Case law has established that our citizens can decide to hot-foot it anywhere and at any time of their choosing, and Five-0 is not to read anything into it.  People get impulses.

Now, if you can tie little Tommy's sudden urge for distance betwixt himself and his protector-in-blue to something more, such as he's in a known drug trafficking area; there's a warrant for his arrest; or maybe he's just coming out from behind a store that has an alarm clanging away and it's four in the morning, well then, maybe you'll get some exercise after all.

New Jersey has the death penalty...did you know that?  Neither do we apparently, as there's not been an execution in this state for well over a quarter century and probably much longer.  Courts have sentenced a number of murderers to death during that time but no one ever quite gets around to the dirty deed.  So, let's just say that we have a 'life until death' penalty, shall we?

Lest you think we're soft on crime, let me throw you this curve ball--we don't need no stinkin' probable cause to search someone for stolen library materials!  That's right, Lopresti, all you've got to do is point a finger and we're taking 'em down.  We like our libraries here; make no mistake about it.

So there you have it, gentle reader, a litany of the strange and the zany quirks of Jersey law and its enforcement.  It's not a comprehensive list, but it does give you some of the highlights, as well as a flavor for how we do business in the 'big' little state when it comes to policing.  I hope you enjoyed the tour.  Now if you'll follow me we'll finish our little chat about those 'rights' of yours...Oops...that was a lot of stairs, wasn't it?  Sure, I'll have rescue here in a jiff, but while we're waiting, how about that confession you've been dying to make?  And look, the silly camera is working again...how about that?