by John Floyd
Every year at Christmas our family--my wife and I, our daughter, our sons, and all their spouses and children--get together for a week or so, at our house. The headcount is up to thirteen now, and shows signs of growing even more in coming years. It's a lot of fun, and since the five grandchildren are all under the age of seven, it can be a little chaotic as well. Sort of a mix between a Waltons Christmas special and the studio food-fight scene in Blazing Saddles.

What's different about this year is that some of our clan arrived here later than usual--the day before Christmas Eve--and are staying until after New Year's Day, instead of coming a week earlier and leaving just after Christmas. Therefore, instead of my usual practice of avoiding booksignings the week before Christmas because the family's here, this time I told my publisher I'd be available, and wound up signing at several Booklands and Books-A-Millions over the past few days.

I had a good time at each store, met some interesting folks, and was pleased to see firsthand that a lot of shoppers still choose to give books as Christmas presents. I'm sure some of them were last-minute gifts--I still remember the way I used to frantically grab presents for the kids at the airport after a business trip--but the fact remains that the items under the tree on Christmas morning sometimes still turn out to be books. That warms my heart: I love to give them and receive them.

(By the way, I don't mean to be ignoring e-readers or magazines or subscriptions to magazines. To me, any kind of reading material--or instrument for that purpose--makes a good gift.)

Take me to your reader

Which brings up another subject. Several of my writer friends have told me they don't read other people's fiction while they're in the process of writing their own fiction. They say that if they do, it dilutes their focus, and keeps them from concentrating fully on their own styles and storylines.

That's fine with me. I've always believed a writer should do whatever it takes to make him or her productive, which of course includes avoiding whatever would make him or her unproductive. If it hurts when you laugh, don't laugh.

But I must tell you, the "don't-read-others'-fiction-while-you're-writing-your-own-fiction" policy is--for me--a quirk that wouldn't work. If I stopped reading other authors' fiction while I was in the process of writing my own, I would never get a chance to read other authors' fiction. I'm always writing something, it seems, and if I'm not actually putting words on paper I'm dreaming up those words to later put on paper. 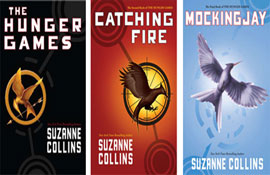 One thing I don't usually do, and I'm not sure why, is read two installations of a series without reading some other kind of book in between them. Novels I've read over the past couple months are (in order): Lee Child's Without Fail, Kinky Friedman's Blast From the Past, Suzanne Collins's The Hunger Games, John Grisham's The Litigators, Child's Worth Dying For, Friedman's Ten Little New Yorkers, Stephen King's 11/22/63, Collins's Catching Fire, Michael Crichton's Micro, and Collins's Mockingjay--and splitting up the two Child and Friedman "series" novels and the Hunger Games trilogy was intentional. I think I just enjoyed them more that way. (During that same period I also wrote seven short stories and I've almost finished plotting two more.) How about you?--Do any of you prefer to read books in a series back-to-back, or do you (like me) prefer to sandwich other books between them?

Speaking of gifts and sandwiches . . . that's a wrap

Happy holidays to everyone! See you next year.
Posted by John Floyd at 00:01