I have been fortunate (sort of) to have had two very different men influence my writing about crime: One was an uncle; the other a clinical psychologist.  They both knew a lot about crime because one was a practitioner of it; the other a specialist in the treatment of 'offenders' of various stripes: two men who never met, though I would love to have heard the psychologist's professional opinion of my uncle had they done so.

My late Uncle Jimmy often comes to mind when I am trying to craft a character whose behavior is less than desirable. He spent a great deal of his life in prison and, when not incarcerated, was involved directly, or peripherally, with many crimes of violence; even murder. He was scheduled to be executed by the State of Georgia at one point, but had his sentence commuted to life when the death penalty was temporarily overruled by the Supreme Court in the early seventies. Did I mention he also had the luck of the devil?

Jimmy was a very good-looking man in his prime: tall, slender, charming, and well-muscled (lots of time in the prison gym). He had deceptively sleepy-looking blue eyes, which went well with his indolent manner, and he was usually smiling, as I recall. I was his favorite nephew, and I was glad. Mostly glad out of a vague dread of what might happen if I weren't.

My older brother, Danny, and I knew the stories about Uncle Jimmy; in fact, he once robbed a store at gunpoint just a few blocks from our house while ostensibly baby-sitting us. We found out later that this was why fetching us cokes and pork rinds took so long.

Mom always blamed her little brother's troubles on 'bad company'. He was also often a victim of circumstances… a staggering number of them by my count. But this was Annie Lou's opinion of most people who got into trouble; including her own boys, of course. Mom never met a 'bad' person. None of her other siblings were ever anything but good and kind people so maybe there is something to her line of reasoning. Of course, there’s always the ‘bad seed’ theory. But where we grew up did, in fact, provide a host of bad company and endless victimizing circumstances.

﻿ Lester's Meadows (isn't that an inviting name; just makes you want to move right into the neighborhood, doesn't it?) was packed with blue collar families; teaming with kids, and rife with violence, mostly of the domestic variety. For example, the first girl I ever had a crush on shot her father to death with his own pistol; she was sick of seeing her mother get beaten. She was only a young girl. It's hard to imagine her life after that, isn't it? But this was run-of-the-mill crime compared to Jimmy, who kicked it up a notch to open-throttled outlawry.

During the course of his career, Jimmy and his gang were involved in bank robberies, shoot-outs (He survived being shot twice– once by the police; the second time in more mysterious circumstances while living with a girlfriend… they broke up shortly thereafter. Remember the bit about luck?), high-speed car chases with guns blazing, escapes from prison, a stabbing while 'inside', a car crash during one escapade, and other incidents in which people were robbed, hurt, and killed. He was feared by both enemies and friends alike.

It's hard to know what makes someone like Jimmy tick. As a writer, I think a lot about his example. To my knowledge, he was never a victim of violence as a child, yet he was a fervent practitioner of it, going by the court records. His robberies were almost exclusively committed in the very mill-worker neighborhoods that he lived in and frequented (my psychologist friend would probably have made something out of that). I never sensed that he had any regret for anything he may have done, and he made me uneasy when he would visit or stay with us during his intervals of freedom.  I always felt he was studying us. It was little like keeping a snake in the house: fascinating, but a little nerve-wracking. I sensed that he was capable of anything.

The constants that I remember from his life were gambling and chance-taking: The workaday life was definitely not for him. I also don't think he had any vision of gaining great wealth as a result of his activities. I think it was the thrill of unbridled action, and the power of violence, that kept him coming back for more. But what do I know? Even when I questioned Uncle Jimmy about it later in our lives, he was evasive and sly; hinting that his actions were largely misunderstood; the police less than sporting. I found I couldn't believe him.

As a result of his actions our home was searched on more than one occasion; my parents questioned by police. Strange, and sometimes sinister, people would also show up on our steps from time to time; claiming to be friends of Jimmy; just looking to catch up, you know. We always gave the same answer: Don't know where he is or how to reach him. In Jimmy's line of work you could make dangerous enemies. We learned to be furtive when it came to my uncle; we knew that there were others just as ruthless out there. 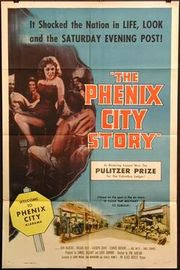 Gangsterism was not new to my hometown of Columbus, Georgia. Our 'little' sister city just across the Chattahoochee River, Phenix City, Alabama, had been making the news for decades as an outlaw capital. Within this town a number of gangs had divided up the turf into various fiefdoms; each containing illegal casinos, bars, whorehouses and dope dens– heroin was the big money-maker in the forties and fifties. The sheriff's department recruited and ran a stable of prostitutes. Perhaps pay for law enforcement was not what it should have been. Citizens who protested their town being used in this manner were threatened and sometimes killed.


It all blew up in 1954 when the State Attorney-General Elect was assassinated there– he had campaigned on the promise of cleaning up 'Sin City'. Martial Rule was declared by the Governor of Alabama and he sent in the National Guard to clean out the vipers' nest. In the end, over five hundred indictments were handed down by the grand jury charged with the case; these included murder, voter fraud and intimidation, assault, bribery, illegal gambling, pimping, prostitution, narcotics trafficking, and kidnapping. 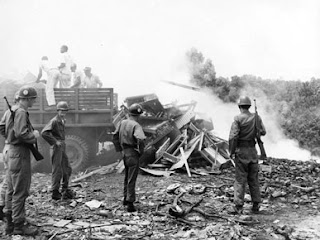 The racketeers' victims were largely textile workers from Columbus and GIs from nearby Fort Benning. People just like Jimmy's family… my family.  He could see Phenix City from his front porch growing up. Were these thugs his role models as a teenager and young man? He would have been the right age for it, but I don't know. He did admit to being an acquaintance of one of these racketeers in his youth… a protégé, perhaps? Maybe Annie Lou was right— it's all a matter of bad company. Or did he just like the lifestyle… period. Maybe it's that simple sometimes. I do remember my psychologist friend once saying, "People's behavior can be complicated, but their motives are usually very simple." I've always remembered that and I think he was right.
People like Jimmy, while dashing in a frightening sort of way, and entertaining, so long as you’re not on the receiving end, create a lot of misery in the world. Besides the obvious victims of violent crime, there are a host of unseen ones: wives, husbands, mothers, fathers, and children that will always suffer as an indirect result. Even the families of the criminals are affected. It’s a bit like poisoning a well— everyone that drinks from it gets sick; all become part of the crime family.

In the end, I fail to come to any positive conclusions about my uncle’s life of crime, though I suspect that you, dear reader, may have drawn some about me and why I chose a career in law enforcement. He did, inadvertently, give me a good education for police work.

As for crime fiction… I often feel that he is looking over my shoulder as I write… but then, so are his victims.

By the by, if you’re at all interested in those long ago events I referred to, there is an excellent book on the subject entitled, The Tragedy and the Triumph of Phenix City, Alabama by Margaret Anne Burns. It’s a riveting, factual account of a truly astounding piece of American crime history. There is also a movie from the fifties, The Phenix City Story (see poster above) that is pretty entertaining, if a little low on production value. It has popped up on TMC from time to time.

Finally, a shameless plug: My story “Ibrahim’s Eyes” is now on Ellery Queen Mystery Magazine podcast and can be found on that website. Doug Allyn did me the honor of both reading it and creating the musical score; which he also performs wonderfully well. Please pass it on to your friends. Thanks, and happy holidays!
Posted by David Dean at 00:01