by Robert Lopresti
by Eve Fisher 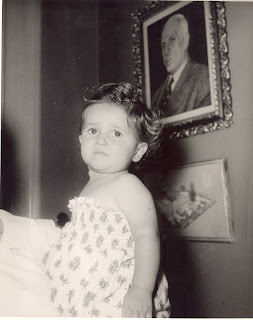 I'm Eve Fisher, new contributor and correspondent from South Dakota.  Not that I'm from around here.  Actually,  I've never been from "around here," wherever "here" was - I was adopted at three from Athens, Greece, and I have moved a lot since then.
I've lived on both coasts, spent almost two decades in the South (Kentucky, Georgia, Tennessee and North Carolina), and I currently live in small town South Dakota, along with my husband, my cat, and (at last count) five thousand books.  (So many books, so little time...)  And, along the way, I've been to almost every state in America, including every national/state park, monument, giant ball of string and iguana farm west of the Mississippi.  I even stayed (as a child) in the teepee motel on Route 66!

I've had a lot of variety in my working life, too, ranging from an early job as a part-time clerk in a seedy corner market in Atlanta (where I was the only woman to work there who wasn't robbed or shot - more on that another time), to teaching history at the university level in Brookings, SD.   I've worked for ballet companies, lawyers, CPAs, pizza places (I make a great pizza dough), judges, fabric stores, and for quite a while I was the circuit administrator for one of the South Dakota judicial circuits, which enlarged my acquaintance considerably on both sides of the law (more on that another time, too).

I primarily write mysteries, some fantasy/sci-fi, and primarily short stories.  I’ve been fortunate enough to have had many publications in Alfred Hitchcock Mystery Magazine - I'm in the May issue along with Rob Lopresti, R. T. Lawton, and many others.  Honored as always, both to be published and to be in great company!  You can find all of my published stories (or links thereto) at my website at http://evefishermysteries.wikispaces.com/

So, having said all of that... 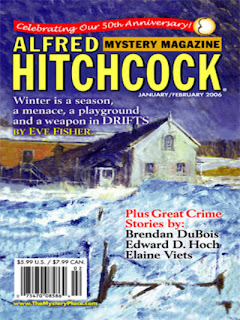 Almost all of my writing -  no, I'd say all of my writing starts with either a character or a place that takes over my mind.
For example, I was sitting in a local restaurant, where a (locally) well known and well-respected couple who shall be nameless walked in as the restaurant phone rang.  The man turned to his wife and said, "I'll bet that's for you.  I wish I had my gun, I'd shoot it."  Well, that sparked "The Lagoon".

My story "At the End of the Path", a strange mix of mystery and fantasy, is set in a half a mile long path between ordered rows of pine trees at our local state park, a path set high up on a ridge, planted a very long time ago, by persons unknown, a path somewhere between a refuge and a haunting, and the light draws you on and on until the very end.
Then there's "Not the Type", which is based - only partly! - on a real incident, decades ago, where a girlfriend and I ran into an old boyfriend of mine and his new wife.  She took one look at me and decided that my girlfriend was the one he'd dated, and acted accordingly.  Not necessarily a good idea.
And "Drifts", one of my personal favorites, which...  well the cover says it all:  "Winter is a season, a menace, a playground, and a weapon."

Anyway, it's great to be part of SleuthSayers.  Next time I'll share some scenes behind the scenes, or whatever curious incidents come up.  Speaking of incidents, did I mention that a couple of months ago we had a premeditated murder in our nice small town?  All because of an incident in the locker room in high school almost fifty years back:  Resentments really can kill you.
More later,
Eve
Posted by Robert Lopresti at 00:58 12 comments