A Question of Identity

With any luck, by the time you read this, I'll be on vacation with my husband, taking a Mediterranean Cruise. I love cruises: I find it infinitely relaxing to unpack once, and then do pretty much whatever I want to do for the duration. I love the Mediterranean: the food, the scenery, the history, the artwork. I love vacations: it gives me time to think, the long-houred, idle thinking (sometimes drifting, sometimes racing) that I don't often have time for at home. This is the kind of thinking /dreaming / drifting that came with childhood and is one of the main reasons for nostalgia about childhood. Time. An idea. A thought. A question. And you're off…

And currently, I've been thinking about a lot of things: identity, mortality, friendship, relationships, because of the death of one of our very best friends, Frank Senger. He was only 61. A wonderfully talented actor, who appeared in (among other things) The Professional, Maximum Risk, a number of Law & Orders and Oz. He also wrote and performed poetry and performance art pieces. He was the best man at our wedding, 37 years ago, my husband's best friend, and my best improv partner ever.

Allan and I and Frank and his wife, Theresa (a wonderful visual artist), hung out well together: we talked constantly, vacationed, cooked and ate extremely well, hiked, laughed, watched movies and TV shows, went to art exhibits and performance pieces, and anything else that struck our fancy. Frank was a great friend, a great listener, a great person. His death was sudden, tragic, comic, and pure Frank: he was teaching an acting class, doing a death scene, in which he fell down... and did not get up... (A friend of mine heard that and said, "he'll haunt that theater forever - in a nice way", and she's probably right.) He suffered a massive coronary. We still can't believe that he's really gone.

Deaths are hard. Every time you lose someone important to you, you lose not only the person you were, but the person you were with that person. And the person they were with you... For example, whenever we all got together, sooner or later Frank and I would go into improv: Bad Kabuki Theater, Bad Greek Theater, Hillbilly Hamlet, and many, many others. I could be absolutely fearless with Frank, because no matter what I said, he'd catch it, play with it, tie a bow in it, and throw it back. I can't imagine anyone else triggering the Eve who did that fearless improv at PS1 in NYC. We'd gone to see an installation piece that was pure crap, so Frank and I started doing Bad Greek Theater, with Frank orating a mixture of artistic / political / social satire and gobbledegook while I was his Greek chorus, waving my arms while chanting, among other things: "Orestes! You've lost your testes!"

Allan... well, to Allan, Frank was his best friend and his brother. And Theresa... it's unimaginable what she's going through.

Friendship is a great mystery, and only deepens the great mystery of identity. None of us will ever be again who we were with Frank, because that special chemistry only existed when we were with him. Not only do we not live in a vacuum, but we (literally, in all conjugations) ARE not in a vacuum. Who we are is dependent, in large part, on who's around us, and changes accordingly. C. S. Lewis explained it on The Four Loves:

"Lamb says somewhere that if, of three friends (A, B, and C), A should die, then E loses not only A but "A's part in C," while C loses not only A but "A's part in B." In each of my friends there is something that only some other friend can fully bring out. By myself I am not large enough to call the whole man into activity; I want other lights than my own to show all his facets. Now that Charles is dead, I shall never again see Ronald's reaction to a specifically Caroline joke. Far from having more of Ronald, having him "to myself" now that Charles is away, I have less of Ronald." (p. 96)

And less of myself as well, because I'm also not large enough to call MY whole person into activity. Contrary to egomania and other common disorders, I want and need other lights than my own to show all my facets as well. I believe that's part of the reason that people, as they grow older and their contemporaries die, retreat into memory. To recapture not only their friends and family, but themselves. Because half of what we talk about with family and friends is the past, the things we did together. We reiterate, play back the past over and over again to make sure that not only we remember, but the next generation learns it as well, so that they can remember, too.

That's why we have things like history, diaries, Gilgamesh, the Iliad, and Icelandic Sagas. If you can't pass down the memories one way, pass them down another. Because when there's no one who remembers but you... well, that gets tough. And strange. I know. My parents have been dead for 16 years, my grandparents for over 30 years. I have no other living relatives. So I have no one to reminisce with about my childhood, not to mention the stories they told me about their lives, and other relatives' lives. Thank God for writing…

Back to friendship: Lewis also wrote, "Friendship is unnecessary, like philosophy, like art... It has no survival value; rather it is one of those things that give value to survival." (And God knows, as Emily St. John Mandel said in Station Eleven, "Survival is insufficient.") But I disagree with Lewis: Friendship IS necessary. It DOES have survival value. Art, philosophy, music, friends, lovers, family - everything that touches us, mentally / emotionally / spiritually, goes into making us who we are. To lose any of that is to lose a part of ourselves. To change ourselves. To gain any of it is to enhance ourselves.

“No man is an island, entire of itself; every man is a piece of the continent, a part of the main. If a clod be washed away by the sea, Europe is the less, as well as if a promontory were, as well as if a manor of thy friend's or of thine own were: any man's death diminishes me, because I am involved in mankind, and therefore never send to know for whom the bells tolls; it tolls for thee.” John Donne, Devotions upon Emergent Occasions, 1624.

John Donne is always right on the money.

R.I.P., Frank Senger, and all the people I have loved, now no longer.

Who is that out there?  In cyber-space?  In the neighborhood?  Do you know who your neighbors are?
Or do you only think you do?  What kind of identification do you really need to survive these days?  Do you need any at all?

Example:  We have, as I have noted in the past, a number of little businesses here in South Dakota that provide South Dakota citizenship, driver's license, voter registration, mail service, etc., to anyone who's willing to pay what I consider a very modest fee - about $50.00 a month.  Used by people who want to RV around the country, or those who live in states with high state income tax (or any state income tax).  And also used by South Dakota citizens who don't want anyone to know their legal address.  So you meet someone, John Doe, and they give you their address, at 555 Main Street, Bwabwa, South Dakota.  Except that there are about 1500 people, at least, with that address.  You don't know where John Doe actually lives, where he was actually born, where he actually does anything at all...

Example:  Have you gone to a retirement center recently?  They all remind me of Miss Marple's disquisition on Chipping Cleghorn in "A Murder Is Announced":  "People just come - and all you know about them is what they say of themselves...  People who've made a little money and can afford to retire.  But nobody knows any more who anyone is.  You can have Benares brassware in your house and talk about tiffin and chota Hazri - and you can have pictures of Taormina and talk about the English church and the library ....  People take you at your own valuation." Sure, that distinguished looking grey-haired lady SAYS she used to be a judge, and she certainly knows her law.  But there's more than one way to gain an extensive knowledge of the law, and it's very hard to prove someone is or is not who they say they are.

Example:  The internet, awash in usernames that can't be traced - PaulZOmega may say he's a Biblical scholar, and hotchatony she's a retired grandmother in Gran Canaria, but you have no proof, and all the information can be gotten on the internet in about two minutes.  You can set up multiple e-mail identities, multiple Facebook identities, multiple anything identities, and never ever surface in your real persona.  How many of us have filled out every internet questionnaire accurately?  No fibbing?  No blanks?  (On Facebook, for example, I put down January 1, 1905 as my birthday.)  And while I know that hackers can find out who you are, who anyone is, and track them through all their more or less interesting internet life - I'm no hacker and I personally don't know any hackers.  I'm stuck - we're almost all stuck - dealing with avatars.

Now granted, someone is keeping track of our hits, our purchases, our likes, dislikes, political viewpoints, advertising preferences, television and movie rentals.  And billions of people are providing a constant stream of photos of themselves and their children in various stages of disarray, sickness, partying, playing, working, fooling around, and general silliness.  Not to mention tweets of their opinions, acid reflux, and shopping.  And yes, the government (every government, by the way, do not be fooled into thinking ours is the only one that does such things) is keeping tabs on the people (and always has been). 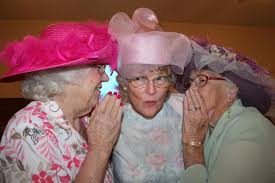 And yet, we are very much alone and anonymous.  We are an incredibly mobile people, moving for jobs, love, fear, whim, anger, fun, restlessness, rootlessness, and being fed up with the neighbors.  We live in a world without roots.  To return to Agatha Christie:  "Fifteen years ago one knew who everybody was...  They were people whose fathers and mothers and grandfathers and grandmothers, or whose aunts and uncles, had lived there before them.  If somebody new came to live there, they brought letters of introduction, or they'd been in the same regiment...  If anybody new - really new - really a stranger - came, well, they stuck out - everybody wondered about them and didn't rest till they found out....  But it's not like that any more."  No, it isn't.  Not in the 80% of the United States that's urban.  (I live in the 20% rural.)  Nobody stands out because everybody's a stranger:  THAT'S WHY THEY'RE THERE.