From The Case Files Of Chief David Dean: The Affair of the Threatened Summer

Occasionally, a case so strange, so baffling, so unusual that it defies easy description, arrives on the police blotter.  The following is such a case:

I found myself one early August morning in 2008 standing on a north-end beach of Avalon, NJ with the mayor.  He was not a happy man, and as a result of this, and the sorry mess I was there to witness, I found my own spirits drooping beneath the mercilessly revealing rays of the rising sun.  We were looking at several acres of medical waste festooning our once pristine beaches...and there were weeks yet remaining of the tourist season--the Labor Day weekend looming as its climax.

This was a scene we had both witnessed a number of times in the past, being something of a Jersey Shore epidemic in the late eighties.  We both also believed that the source of this plague had been successfully squelched years before.  It had been two decades since we had seen the likes of this.  It didn't bode well for the town.  If you know anything about the economics of beach resorts in the northeast, you know that the season is short.  There are but a few months for the townspeople and its shopkeepers to make a year's worth of money.  Every day counts.  And if you know anything about medical waste dumping at sea, you know it takes several days for everything to wash up; sometimes longer, with the media gleefully documenting every syringe-laden tide.  If it helps, call to mind the scene from the movie "Jaws" where the mayor and Chief are standing in front of the billboard.  Remember the bikini-clad gal splashing along on her raft, while the vandal has added a crude depiction of a huge dorsal fin cutting through the waves toward her.  This was such a moment for us--we had just met our shark and he was eating our beach. Unlike the fictional mayor of Amity, however, our mayor had wasted no time in attacking the situation, having gathered volunteer firemen, lifeguards, and borough workers to begin the clean-up.  This was being accomplished under the guidance of our equally able Emergency Management Director and investigators from the NJ Attorney General's Environmental Crimes Bureau.  One of my detectives was documenting the scene.  We were treating it as a crime...which it most certainly was.  But it wasn't the detective, or yours truly, that first noticed that something was different about this particular wash-up--it was the mayor.  "Why's it only in this area?" he asked.  Or words to that effect.

It took me a moment to grasp what he was getting at--we were looking at a fairly concentrated area covering what would be a few city blocks.  In the past, such spills were sometimes spread over miles.  A beach vehicle was dispatched to drive south along the shore to search for more wash-up.  His report was negative.  Then a boat was sent out to try and determine how far out the slick reached.  It was a few hundred yards at most.
﻿ 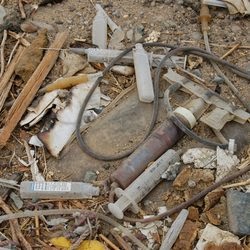 ﻿
In case you're wondering at the significance of these observations, let me explain.  Our previous dealings with illegal dumping had taught us that mostly it was accomplished far out in the shipping channels, and nowhere near shore.  Usually the deed was done from barges being used in the illegal trade of unauthorized medical waste disposal by companies that were lucrative fronts for organized crime families and organizations.  Generally, the material could be traced to medical facilities in New York City and its environs.  When investigators showed up, such fronts, and their employees, vanished like chlorine gas, invisible and toxic.  The practical result of their dumping efforts, however, would spread over many miles as the tide and currents moved them inexorably shoreward.  This was not what we were seeing.  This mess had started within sight of the beach.  This was local, and the joyous scent of prey was suddenly very near.

The waste material itself proved equally unusual.  When one of the investigators from the ECB showed us some of the gathered items, we were all baffled.  They were unquestionably of a medical nature, but nothing that we had come to associate with these events.  There were syringes, but of a type we'd never seen, lots of small cottony swabs, but no bandages, hundreds of small capsules containing some kind of unidentifiable material.  Even the ECB boys (who had been to sites all over the state) were flummoxed.  My detective took some of the evidence back to the station to begin researching it over the internet.  It didn't take long.  This wasn't material from a hospital or clinic--this was waste from a dental practice.  Someone who not only was familiar with the area, but who must have piloted a boat to accomplish this incomprehensible crime.  In my view, as well as others, someone who was close.  During the following two days less and less material washed ashore.  By the fourth day it had ceased altogether.  Only the very north end had been affected by the beach closings, though the publicity hadn't done the town any favors.  Still, it could have been worse.

As the buckets of material were sifted through, object by object, painstakingly photographed and recorded, the first really significant clue was discovered--a dental drill bit with its wrapper miraculously intact.  We had a lot number and a manufacturer. 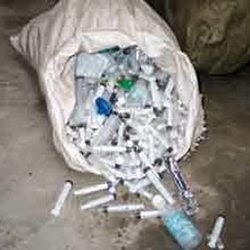 Then, like a dank, chill wind issuing forth from the cavern of the troll king, a summons was received from the county prosecutor to attend a strategy meeting at his offices.  As the head law enforcement officer for the county this was his prerogative.  While understanding it, I was also a little curious as to why.  From where I was sitting, our unfortunate situation had no ramifications beyond my own jurisdiction.  There had been no other instances at any other shore towns in the county.  Normally, as chief, I would have remained behind, leaving such meetings to my detectives.  But my antennae had detected a disturbance in the Force, and I decided to attend, as well.  It was good that I did.

Seated around a huge oval table in the prosecutor's conference room were myself, my detective, the two ECB investigators, the prosecutor and his chief detective, and two investigators that worked for him.  My detective laid out our findings.  The ECB boys nodded in agreement.  The prosecutor's crew...scoffed.  A couple of hypodermic needles had washed ashore in a town north of us. They had seen this all before.  This was just your usual off-shore dumping, and its effects would show up on other beaches in other towns sooner, rather than later.  A local event, indeed!

It was clear that the publicity attendant to our unfortunate situation had gained the prosecutor's attention.  Seeing how my department was working with the state AG's environmental investigators (and she was the prosecutor's boss), he wanted in.

It was also obvious that the syringes in Ocean City were a few insulin needles and did not remotely resemble ours.  I took umbrage.  Not with the prosecutor's rights, or even his motives, but with their sneering condescension.  Umbrage is something I've taken a few times both before, during, and after being a chief of police.  Umbrage means that I clench my teeth, hear bells ringing too loudly, and think dark and bloody thoughts.  Entering the fray, I politely, but forcefully, disagreed, outlining my own extensive experience with these very things; carefully explaining so that even those challenged by their own overblown, and totally unrealistic, high opinions of themselves could understand; making sure to prick the swollen balloons of their egos with the sharp needle of reason and objectivity.  After the long silence that followed, the prosecutor agreed that we should be allowed to continue our futile line of investigation.  He even agreed that a reward should be offered for information leading to the arrest and conviction of the person responsible.  I felt this would bring heat on our perpetrator, wherever he was, as well as the promise that we now had, courtesy of the drill bit maker, a very manageable list of dentist offices that had purchased the lot number recovered from our beach.  I could see no reason not to put this out there for him to hear and sweat.  We promised to stay in touch and left that dark, unhappy, place.

My plan did not take long to bear fruit.  On September 2, even as my detectives were making their way through the list of dental practices that ran from Jersey to the Philadelphia Main Line, a stranger presented himself in the lobby.  He wished to speak with an officer.  Before the day was over, a 59 year old dentist from Pa. had confessed to the illegal dumping of approximately 300 "Accuject" dental-type needles, 180 cotton swabs, and a number of plastic capsules containing filling material, as well as other items.  A search warrant executed at his home and practice revealed evidence that corroborated his confession and he was subsequently charged.

A few days later, the county prosecutor hosted a press conference lauding the arrest and the excellent cooperation between agencies that led to it.  His boss, the Attorney General, was in attendance for his big moment.  I was allowed a few words.  When asked by a reporter how I felt about the arrest, I smiled and said, "I could not be happier.  I feel like Chief Brody when he got the shark."

The strange dentist never offered a motive for what he did, and to this day, I sometimes find myself wondering why.  Medical waste disposal for the average dental office at that time cost about 700 dollars a year.  It couldn't have been the money.

It had been twenty years since anyone had been arrested for illegally dumping medical waste in New Jersey ocean waters.