One month ago today, I lost my greatest fan, Bernadean G. Carlson. She was my mother-in-law, an excellent teacher of children and a great lady. Turned out she also liked my short stories and seemed pleased to have a writer in the family, especially since she was such an avid reader. I married her oldest daughter thirty-two years ago, but I'm pretty sure that's not why Bernie enjoyed my writing. She and I discussed books and writing almost every time we got together.

As a fifth grade teacher, Bernie got copies of my 22 children's stories as they came out in Recess and Time Out, statewide publications for 3rd, 4th, 5th and 6th grade students, over a period of years, about 4 or 5 a year. Of course it may have been a personal bias (she was closely acquainted with the author) because her classes always read and discussed those stories in the class room. Once, I even received a batch of handwritten letters in the mail from one of her classes. They were writing to say thanks and to talk about their feelings on one of those stories. I just hope they weren't writing to me merely so they could get a good grade.

Can't say that Bernie was overjoyed with my day time job, but she soon saw how some of those experiences came out in my mystery stories. She even gave me permission, one time when we came to town for a visit, so a local bookie could come out to her house where I could interview him in her dining room without all his pals seeing him out in public with a federal law enforcement officer. Otherwise, the circumstances would definitely have ruined his reputation. The information I received that afternoon about the inner workings of a nationwide gambling organization became fodder for a short story series. If it hadn't been for the fact that this interview was for the creation of stories, she'd have been mortified to have a criminal in her home. But, since I had a gun, the bookie appeared to be no more than a good boy put on the wrong path by a down-turning economy and she would be out shopping during that time, it would be okay, just this once.

Bernie had her favorite characters in my four AHMM series and would frequently ask what Theodore in the Twin Brothers Bail Bonds and the Little Nogai Boy in the Armenian series were up to next. She took great pleasure in hearing how that little boy got his own story as requested by the editor in Manhattan while her daughter and I had breakfast with that same editor. Naturally, I sent Bernie a personalized copy of each story as it got published in AHMM, and she proudly showed these publications to friends and other relatives.

Some of you may remember about this time last year when I ran a contest on the blog site for the best breakfast recipe. That was one of the times when my wife Kiti was back in eastern South Dakota taking care of her mother for a few weeks while I stayed home in Colorado and took care of two of our grandsons. Testing those recipes took a full week. Every morning, the boys got served a different recipe for breakfast before I drove them over to their local elementary school for classes. At the table, each boy had his own score card where they rated that morning's dish in several different categories on a scale from 1 to 10. These rating sessions often became loud and lively as the boys compared notes and numbers. In the end, we had to have two winners to keep peace in the family. Telling of these shenanigans helped buoy the spirits of Mom while she was undergoing recovery from the chemo and radiation treatments for her cancer. It also helped to lighten Kiti's burden too. I thanked you guys then and I thank you again now.

But, like I said in the beginning, I lost my greatest fan. The medical treatments were too harsh and had to be discontinued. She ended up in a nursing home, unable to remain in her own house. It took a year more, but Bernadean G. Carlson finally passed over at 11 PM on Friday, February 1st, in the arms of her two daughters. Bernie will be greatly missed by all on this end, and there will be a very large gap in my very small fan base.

Sad to say, but Eve Fisher lost a fan too. Bernie very much enjoyed Eve's AHMM stories set in small town South Dakota. It was like those stories were set just down the road from Mom's house.

In Search of Lost Books


A while back, a friend of mine was going through treatment, and I read the 20 questions they give you to see if you're an alcoholic.  I looked up at the end and said, "Well, if you replace the word alcohol with books, that's me."  I am a bookaholic.  I get up planning what I'm going to read that day.  I have books in every room, and a stack of books by every chair that I claim as mine.  I read new books, re-read old favorites, and I am still searching for a few books that I read as a child but either can't find or never did find out what they were. Proust can have his madeleines; I have books.

When I was a little girl, in first, maybe second grade, in Escondido, California, our teacher read a Western aloud to us.  I’ve been trying to find it ever since.  Our teacher was Hispanic, with lustrous black hair and eyes.  Her voice read steadily, with meaning and accents in all the right places.  It was about a cowboy who came down into what was then northern Mexico, and today is Southern California:  the Salinas Valley, perhaps, or Escondido, or one of many other valleys. 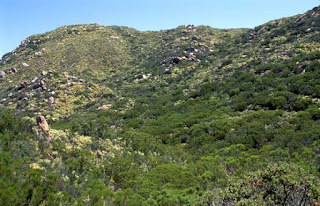 He came down over the hills, I remember.  The description of the brown hills, that look so bare from a distance, but are covered with tall grass, yucca, sage, short cactus, poppies, and all the plants of the chaparral, the description was perfect.  They were the same hills behind our house, once you went over the main hill, the one on which a thin ribbon of a one-street suburb rose to lemon and orange groves, which in turn gave way to avocado groves, which in turn broke open under the blue sky to a mansion on a hill, a mansion with fir trees, a pool, and a view.  Those belonged to the grove's owners, and they also had peacocks, which wandered, crying in the afternoon for love or rain as the clouds piled high and purple behind the dark glossy green of the avocado trees.

I walked my way through the groves, avoiding the mansion – they didn’t like trespassers, even or especially not children – and emerged on the crest of rolling hills that went on forever.  Scrubby, brown, endless; mottled with color, blazing with poppies – I don’t remember the cowboy’s name, but I knew where he had been, and could hardly wait to see where he would go. 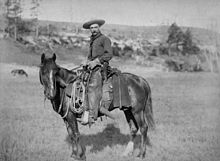 He ended up with a Spanish wife, another woman with lustrous black hair and eyes, whose voice was accented and soft.  They had a son, and I still remember the scene where they decided what to name him.  They chose his first name, which I have totally forgotten.  What I do remember was when his wife said that only one name wouldn't do.  You named a child after everyone who was important to you:  grandparents, parents, uncles, aunts, best friends, and acquaintances.  But our cowboy was all alone, and I think what impressed me was that it was the first time he realized how alone he was, because I felt much the same.  He could only think of one friend, Joe.  “d’Joe” she said, pronouncing the “j” as “h”…  And it became the son's middle name.

I remember that.  And no more.  I asked the teacher, at the end of the year, what the name of the book was – and she couldn’t remember.  But I’ve wanted to read the rest of that book for a very long time.  I want to know what the rest of his - their - journey was.  Maybe some day I'll find it.  If it rings a bell with anybody, please let me know.
Posted by Eve Fisher at 00:01 8 comments