When I was reading a review of a new biography of Thornton Wilder, I came across the information that he had collaborated with Mrs. Hitchcock, among others, on the screenplay for the great Shadow of a Doubt. Any who do not know this classic psychological suspense movie from 1943 are in for a treat. It’s Hitchcock at his bland, safe, suburban best (but don’t you relax for a minute) and Joseph Cotton is perfect as the visiting relative who may, or may not, be a lady-killing serial  murderer.

Thoughts of Shadow of a Doubt led me to think about the importance of doubt in mysteries in general. Sure, we tend to think of mysteries as the genre of certainty. Detectives spend their time trying to establish the perpetrator to prosecutors’ satisfaction, and much of the pleasure of the genre rests in a tidy wind up with a ‘sure thing’ result.

But on the way to certainty, doubt can be a very useful device and one that produces a maximum amount of painful reflection and anxiety in the characters it afflicts. Young Charlie in Shadow loves her uncle, enjoys his company, and appreciates the whiff of big city sophistication he brings to sleepy Santa Rosa. The arrival of a detective with suspicions arouses first, her indignation, then her suspicion, and finally a realization that all is not right with her beloved uncle.

I’ve used a similar progression twice in novels. In Night Bus, the heroine must decide if she is paranoid or if her husband and sister-in-law are really plotting against her. This is an admittedly venerable story line but a useful variant of the much-favored ‘woman in jeopardy’. In Voices, the shoe is on the other foot. A family must decide if the earnest and vulnerable young woman who comes to call really is their long lost child or a deluded (or larcenous) intruder.

Doubt in short stories presents a greater challenge than in novels because everything must unfold quickly, preferably, as close as possible to the climax of the action. Nonetheless, I’ve tried stories with a high doubt quotient several times. In The Armies of the Night, a return to her old home forces the narrator to confront fearful, but hitherto suppressed, suspicions. In The Helpful Stranger, a woman is caught between her natural courtesy and a fear that the helpful stranger with his offer of a ride has another, more sinister, agenda.

I found these fun to do, especially The Helpful Stranger where I was able to combine rising doubt with a reversal of the two character’s roles. But in every case, doubt adds another layer to suspense. Someone pursued about an old dark house by a bad guy lives in straight-forward terror. But someone who is uncertain whether to be wary of a companion is in a different, more complex place, where fear of bodily harm is enhanced by fear of making a crucial social gaffe. The latter is often a feature of older UK mysteries, Eric Ambler making good use of it in Journey into Fear for one. 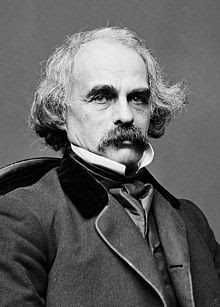 Film buffs and mystery fanatics will undoubtedly have a long list of stories with ambiguous characters and doubtful situations – Gaslight and Notorious come instantly to mind. But one of the great masters of doubt is neither a mystery writer nor a filmmaker. Nathaniel Hawthorne summed up the psychology of doubt as well as anyone: “Blessed are all simple emotions,” he wrote in Rappaccini’s Daughter, “be they dark or bright! It is the lurid intermixture of the two that produces the illuminating blaze of the internal regions."

This is literally so in perhaps his greatest story, Young Goodman Brown. Young Brown ventures out to the night woods (bad idea) to attend a witches’ Sabbath (worse idea) for just this once (one of the few things my students understood immediately about this tale). He meets a stranger who strongly resembles his father, but neither Goodman Brown nor the reader has any doubt that this is the Prince of Darkness or, as the old Calvinists termed him, the Old Deceiver.

Rather, Brown’s doubt turns out to be of a fundamental and existential nature. Should he believe the fantastic events in the forest, the evidence of his senses? Should he conclude that his neighbors are all bound to the devil and only he has escaped damnation? Or is the deception the other way around, and is he the one, who, succumbing to momentary temptation, has had his life, his faith, and his happiness destroyed by the devil?

Now that is doubt with a capital D.
Posted by Janice Law at 00:00 8 comments