I became a latchkey child at age ten when my mother went to work out of the home for the first time.  I immediately thought it would be nice to cook dinner for my family before Mom and Dad got home from work, so I learned to cook; however, I was never fond of washing dishes.  My mother washed pots and mixing bowls as she went along, but I tended to pile them up on the counter and wash them right before my parents were due home.

The solution to having to do all that dish and pot washing was that my friends came to my house after school.  If I would swipe a  novel from one of my father's bookcases and read it aloud to them, they would do the dishes, set the table and damp-mop the kitchen while I read. They'd be finished and gone home in time for me to return the book to Daddy's office before he got home from work.

It would be ridiculous to try to tell how many books we went through including the complete works of O. Henry and Edgar Allan Poe, but I want to tell you about one my favorites.  We read Mickey Spillane, and that was hot stuff in those days, but then we discovered some old paperbacks by Richard S. Prather.  They were about Shell Scott, the second most commercially successful private eye of the fifties with over forty million sales (second only to Mickey Spillane's Mike Hammer). 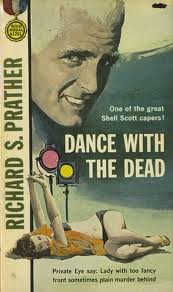 At six feet, two inches tall, ex-marine Shell Scott stayed forever thirty years old.  His bristly white-blonde buzz cut  and almost white eyebrows off set the fact that his nose had been broken and a chunk of his left ear was missing, but my girlfriends and I thought he was hot!  He drove a yellow Cadillac convertible, and I wonder if subconsciously that had anything to do with the first car I ever bought in my own name being a yellow Austin Healey convertible.

As originally envisioned, Shell Scott was typical of the post-war Spillane character Mike Hammer.  They were both private investigators who talked tough and carried guns,but Shell Scott offered more than Mike Hammer.

The usual sex and violence was lightened in Shell Scott's adventures by
what's called "a sort of goofy hedonism."  He enjoyed life with a main concern toward looking for the next good time though he did end up serving justice and vengeance like the others.  He just had more fun doing it.  We adolescents loved it!  The wisecracks and double-entendres got wackier and wackier and delighted us kids more and more as Prather increased them and we grew old enough to understand them. 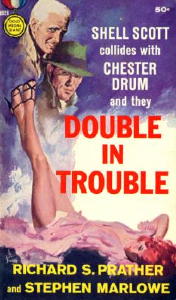 In Way of a Woman (1952) Scott escapes the bad guys by swinging from tree to tree through a movie set--as we say in the South--nekkid as a jay bird in that scene, and boy, we kids pictured and discussed that.  Strip for Murder has been described as "a full-out hoot."  Scott goes undercover at a nudist camp and ends the book landing a hot air balloon in downtown Los Angeles--nekkid again, of course.  The Cock-Eyed Corpse (1964) found Scott disguising himself as a prop on a movie set, which led to the memorable line:
"You won't believe this, but that rock just shot me in the ass."

Prather was also a very successful magazine writer with many stories published in major mystery periodicals of the time.  Some of them were excerpts from Shell Scott novels while others were straight-out short stories.  He and Stephen Marlowe co-wrote Double in Trouble, but Marlowe's report on writing with Prather didn't make it sound easy.  (I'm saving that for my next blog which is about co-writes.) 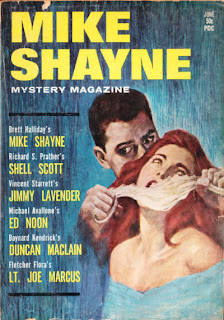 The Thrilling Detective Web Site described the Shell Scott stories as "smirky, outlandish, innuendo-laden, occasionally alcohol-fueled, off-the-wall tours-de-force that, depending on your point of view, were either a real hoot, or a lot of adolescent, sexist swill and hackwork."  Not having read a Shell Scott since adolescence, I wonder if my fascination with him and Prather's stories were because of the genuine appeal of the second best-selling PI writer of the '50s or because I was an adolescent who enjoyed sexist swill and hackwork.


Tell you what I'm going to do--gonna read some of those books again, from a more mature, far more mature, point of view.  I'll let you know how much difference the decades make.  Meanwhile, if you've read Prather, let us know what you think or tell us about a literary figure you loved in your youth.