by Steve Liskow
Happy New Year. Either online or in your local newspaper, you've probably seen one of those cartoons of 2018 in a diaper and 2017 with a long white beard, so I'm going to spare you another one. It expresses the idea that the old pass the world to the young and that there's still hope for the future if we build a strong foundation in the present. One of the great practitioners of that belief was also one of my favorite writers, Mark Twain.
And to prove it, this last September saw the release of Mark Twain's newest children's book, The Purloining of Prince Oleomargarine. Yes, it's true, a new book from Mark Twain! And it's wonderful. 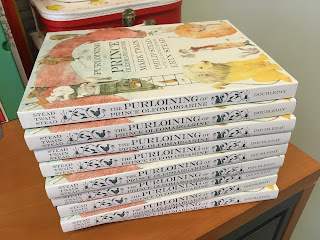 The Clemens family moved to Hartford, building the Farmington Avenue house in 1873-4 and living there until 1891, leaving forever after daughter Susy died suddenly of spinal meningitis. In the cigar-smoked study on the third floor, Samuel Clemens composed Tom Sawyer, Huckleberry Finn, Life on the Mississippi, The Prince and the Pauper and A Connecticut Yankee in King Arthur's Court.

He also observed the ritual of creating a nightly bedtime story for older daughters Susy and Clara. 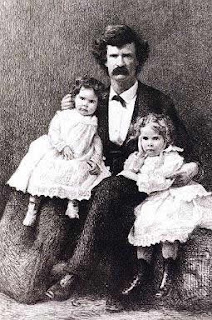 In 1897, they made him continue a story they liked for five consecutive nights. He later jotted down notes and the first part of that story, but he never finished it. The new book includes the convoluted saga of how the partial manuscript was discovered in the Twain Archives at UCal Berkeley in 2011 and how the estate picked Caldecott winners Philip and Erin Stead to complete and illustrate the story--which they have done beautifully.

Prince Oleomargarine shows Samuel Clemens/Mark Twain at the peak of his powers, but used in a way we've never seen before. It combines elements of popular fairy tales (Jack and the Beanstalk, for one) and several quest myths with a poor boy named Jack as the unrecognized hero. We meet a chicken named Pestilence and Famine, a skunk named Susy, and a menagerie of other quirky animals, all tied together with prose that's lyrical, ironic, and often bittersweet. My favorite line: "He felt as though he carried on his back the weight of all the things he would never have."

I never would have heard about the book if it weren't for my wife, who has one of the coolest jobs in the universe. She is a "Living History" tour guide at the Mark Twain House and Museum in Hartford, 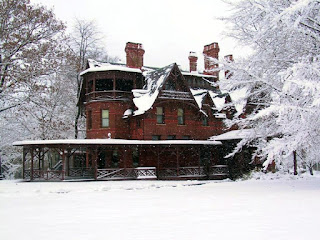 which held the book launch last September. She portrays the Clemens' housemaid Lizzie Wells and shows guest the house as it "is" in 1887. She got the gig because we both worked with several of the other guides (and the script-writer) in local theater for years, and the mansion wanted to increase the number of guides and tours. The offered Barbara a spot and she grabbed it.

According to National Geographic, the Mark Twain House and Museum is one of the ten most visited historical homes in the WORLD. In the 1920s, a developer purchased the vacant mansion, planning to raze it and erect an apartment building. A coalition formed to buy the house back--for less than that developer hoped to gain--and restore it to its former glory. Middle daughter Clara, who died in 1962 at age 88, helped track down the original furniture. She also gave Hal Holbrook a private audience when he was developing his Mark Twain impersonation and approved his performance. How's that for a reliable source?

Clara and Susy showed Papa pictures from a current magazine and had him tell a story inspired by those pictures. Today, we would call that a "writing prompt," but I never heard the term until near the end of my teaching career. My wife tells of writing stories to accompany the pictures in one of her favorite childhood books--when she didn't think the story already there was good enough. Do kids still do that today? Do they get encouragement?

Clemens and his children created dozens of stories involving The Cat in the Ruff, a picture in the family's library, but none of those survive. It's only through a freakish stroke of luck that Prince Oleomargarine has come to light. 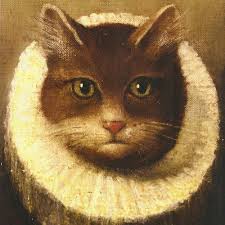 The image of a busy and often irascible father spending his evenings sharing the excitement and joy of creating fresh stories for his children is one I can't stop thinking about. We all need to pass on to our children and grandchildren the magic of creating something new, whether it's stories, music, or painting. How will they discover it for themselves if we don't show them where to look? Buy them books for Christmas and birthdays, preferably with great pictures. Read them and share them. Play games that help them make things up. Let them pretend. Help them dream.