Let's Hear It for MMs

Several years ago I was Googling markets for short mystery stories (I do that from time to time) and stumbled upon a site called, believe it or not, Better Holmes and Gardens. When I investigated, I found submission guidelines for a publication I hadn't heard of before: Sherlock Holmes Mystery Magazine. That's right--yet another MM.

Like all mystery writers, I love AHMM and EQMM, and I also submit a lot of stories to other current magazines that regularly feature mystery fiction, like The Strand, Woman's World, Over My Dead Body, Crimespree, Mysterical-E, BJ Bourg's Flash Bang Mysteries, etc. But the truth is, there aren't a lot of markets out there anymore--paying or non-paying--that specialize in mystery shorts.

Back to my discovery. Sherlock Holmes Mystery Magazine is a product of Wildside Press, which I believe also publishes the iconic Weird Tales. As soon as I found SHMM I sent them a story, a little mystery called "Traveling Light," and was pleased and surprised when they accepted it. They paid me promptly, and when the piece was published they mailed me several copies of what turned out to be a smart-looking magazine, with an attractive cover and a wealth of interesting stories inside. Since then they've been kind enough to publish four more of my mysteries, all of them installments in a series featuring a female sheriff and her crime-solving mother.

My latest is in Issue #19, and appears alongside tales by my friend Jacqueline Seewald and my fellow SleuthSayer Janice Law. I've not yet read all the stories in the issue, but I've read Jacqueline's ("The Letter of the Law") and Janice's ("A Business Proposition") and they're excellent as usual.

Anytime mystery magazines are the topic, I find myself thinking about those that have come and gone, over the years. A few were receptive to my stories and a few rejected everything I sent them (sort of like some of the magazines that are still around), but I think I tried them all. And I thought it might be fun to take a quick trip down MM-memory lane:

Mystery mags of the past

- Blue Murder -- I think I remember trying these folks and getting rejected every time. - Whispering Willows Mystery Magazine -- Short-lived. I barely remember this one.

- Crime and Suspense -- This had some fine stories during its short run. Tony Burton, editor.

- Nefarious -- Online-only, if I remember correctly. One of the first e-zines.

- Raconteur -- Like RHMM, this one accepted one of my stories and then put all four feet in the air.

- Orchard Press Mysteries -- This was an early e-zine as well. I had only one story there.

NOTE: Please let me know if you remember some of the many that I've overlooked--or if any of these I've listed have taken on new life. 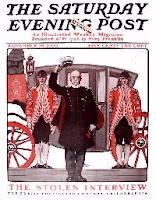 Besides the obvious choices, I also continue to try to sell my mystery/crime shorts to places that don't specialize in mysteries but that occasionally publish them anyway--and there are more of those than one might think. Here are some, from both now and long ago: Grit, Dogwood Tales, Spinetingler Magazine, Untreed Reads, Writers on the River, Yellow Sticky Notes, Prairie Times, Mindprints, Sniplits, Pages of Stories, Amazon Shorts, Just a Moment, Kings River Life, Reader's Break, Writers' Post Journal, Short Stuff for Grownups, Champagne Shivers, and The Saturday Evening Post. (Remember, it's generally accepted that a mystery is any story in which a crime is central to the plot. It doesn't have to be a whodunit.)

Now and then, even so-called literary magazines will feature a mystery story: Pleiades, Thema, Glimmer Train, Phoebe, some of the college lit journals, etc. Tom Franklin's short story "Poachers," which won an Edgar and appeared in The Best American Mystery Stories 1999, was first published in The Texas Review.

Finally, any discussion of mystery markets should include a mention of anthologies. I usually find them by Googling "anthology calls for submission" and checking Ralan's Webstravaganza, which is advertised as a science-fiction site but doesn't limit itself to that. The two advantages of anthologies over magazines, I think, are that (1) anthos usually request submissions in a fixed window of time, which can be a plus if you hop in right away, and (2) they are often "themed." If you happen to have a finished story that fits their theme--or can write one quickly--you'll already have a leg up on the competition. Another excellent site to check, for mags as well as anthos, is Sandra Seamans's My Little Corner.

Anthologies that I've been associated with, all of which contained some mystery stories and most of which you've never heard of, include Seven by Seven, Trust and Treachery, Magnolia Blossoms and Afternoon Tales, After Death, Flash and Bang, Crime and Suspense I, Mad Dogs and Moonshine, The Gift of Murder, Quakes and Storms, Short Tales, Fireflies in Fruit Jars, Sweet Tea and Afternoon Tales, Ten for Ten, Thou Shalt Not, A Criminal Brief Christmas, Rocking Chairs and Afternoon Tales, and Short Attention Span Mysteries.

A leading anthology for mystery writers is of course the "noir" series produced by Akashic Books, in Brooklyn. Several of my SleuthSayers colleagues have graced those pages, and one of my stories will be in the upcoming Mississippi Noir. Other anthology possibilities are the annual "best of" editions that feature stories published during the previous year, like Otto Penzler's Best American Mystery Stories series.

And that's it--I'm out of examples. I'll end with a question: What are some of your favorite short mystery markets, past and present?

May the ones we have now last forever.
Posted by John Floyd at 00:01 44 comments

Got a from Sherlock Holmes Mystery Magazine in early March describing a fascinating event in their lives.  Like good citizens they had purchased the right to use the Master's name on their magazine.  Unfortunately the person who sold them said rights apparently didn't own them.  Oopsies.  Do a search for Andrea Plunkit and Doyle estate if you want the gory details.

Wondermark is one of the most delightfully bizarre comic strips on the web.  Monty Python goes cyberpunk, sort of.

3.  Harlan Coben, here is the plot for your next novel

When Lori Ruff died in Seattle she left a strongbox full of secrets.  They made it clear that the wife and mother was living under a stolen identity.  But who she was originally and why she changed her name, well, her husband would sure like to know.  From the Seattle Times.


4.  James Powell is going to happen

I don't know if you follow Something Is Going To Happen, the blog at Ellery Queen's Mystery Magazine, but they recently published a wild piece by Jim Powell who demonstrates that at an age even more advanced than my own he has a crazier imagination than any teenage gamer every dreamed of.  Watch him free associate...

Though it isn’t a mystery story, Edgar Allan Poe’s “The Man in the Crowd” may be the short story at it’s best, for there are really only two characters, the man and the crowd. (Speaking of Poe, it has been a long time since the Sherlock Holmsing pigeon drove the Raven “nevermoring” all the way, from its perch on the bust of Pallas just above Poe’s chamber door only to come back to us again as a good part of Johnny Depp’s Tonto headgear in the new Lone Ranger movie. Sherlock’s pigeon would be replaced a few years later by the Maltese Falcon. I wonder what kind of bird will come next to roost on that well-encrusted and put upon piece of statuary?)

Have you seen the website Murder by Gaslight?  True crimes of Victorian England.  Quick, Watson!  Call C.S.I.!
Posted by Robert Lopresti at 00:04 4 comments