Mystery of the Little House Books


Our guest blogger this week is Susan Wittig Albert, who wants to introduce you to her latest, an intriguing literary deception.

— Jan Grape
Most of the time, I write mysteries. Some of my mysteries are contemporary (the China Bayles books), some historical (the Darling Dahlias 1930 series), and some biographical (the Beatrix Potter Cottage tales and the Robin Paige Victorians that I wrote with my husband). Most of these mysteries involve a crime of some sort, usually a murder, always involving some kind of criminal deception. 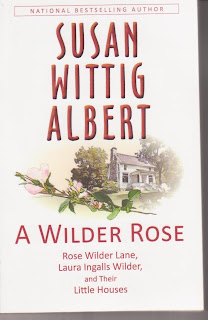 Recently, I wrote about a different kind of deception, a literary deception, in In A Wilder Rose, a true story about the writing of the Little House books. If you read those books as a child, you probably remember that they were about the Ingalls family's pioneer treks from Wisconsin to Indian Territory back to Minnesota, and then on to South Dakota. The named author of the eight books– beginning with  House in the Big Woods and ending with These Happy Golden Years– was the child heroine of the series, Laura Ingalls Wilder. By the time the books were published (1933-1943), Laura was in her 60s. While she had written poems for children and contributed paid newspaper articles to a farm journal, she had never written a book in her life.

When I was a kid, I adored these books. But when I grew up and began to study literature (on my way to becoming a college English professor and an author of young adult and adult fiction), I puzzled over the mystery of how this elderly farm wife could produce eight perfectly-told books. Usually, this was explained by saying that Laura was a literary genius, and leaving it at that. But when I became a fiction writer myself and learned how truly difficult it is to write a book and get it published, I began to wonder how that worked for a 60-ish woman living on a remote Missouri Ozark farm in the 1930s. She rarely left the immediate area and had never been to New York. How in the world did such an isolated writer find an agent? Did she send out query letters with samples chapters? How did she know where to send them?

But the mysteries began to multiply when I discovered that Laura Ingalls Wilders had a daughter, Rose Wilder Lane--and that Rose (married and divorced) was a nationally famous journalist and one of the highest-paid women magazine writers in America. When I learned this single fact, all my mystery-solving instincts came alive at once and I embarked on a research project that led me to learn about Rose's life as a writer and a daughter.

I was helped along the way by William Holtz's 1933 biography of Rose. He argued that Rose was the
ghostwriter behind the Little House books, but he didn't provide much persuasive evidence of that claim. Following some leads from Holtz's book, I visited the Herbert Hoover Presidential Library in West Branch, Iowa where Rose's papers are held. In the archive, I found Rose's diaries from the years in which the Little House books were written as well as letters exchanged between Rose and her mother. When I studied the letters along with Laura's original manuscripts, I was able to put dates to the extensive work Rose did on the books and solve the mystery of how the Little House books came to be written and published.

The story in a nutshell: Flush with $10,000 from the sale of a book, Rose came home to the Wilder farm in 1928. She built her parents a "retirement cottage" on the property and she and her friend, Helen Boylston, moved into the old farmhouse. But then the crash came, Rose's magazine markets dried up, and she was stranded at the farm. Hoping to earn some money, Laura settled down to write her memoir, 328 handwritten tablet pages she called "Pioneer Girl."  Rose edited her mother's draft and sent part of it to an author friend in New York. An editor expressed an interest in it. When it was published in 1932, that part of "pioneer Girl" became Little House in the Big Woods.

Over the next ten years, Rose and Laura carved up "Pioneer Girl" into the eight Little House books. Laura would produce a handwritten draft, and Rose– using her experience as a published author– would rewrite it into publishable form. Laura would submit Rose's typescript under her own name, to George Bye, the literary agent who also represented Rose. Bye would send it to the publisher.  When the copy edited text came back, Rose did the work of checking it, and Laura submitted the approved text, again under her name. Each of the eight books in the series was done this way, without neither the agent nor the books' editors knowing that Rose was responsible for the finished submissions.

Why did Rose not insist on being acknowledged as a co-author or ghostwriter of Laura's books?

For one thing, she wanted her mother to be recognized as an author (her mother dreamed of achieving "prestige") and to have whatever royalties the books produced, although no one could have predicted in 1932, that they would produce a large fortune. The Wilders had no income except the few dollars they earned by selling milk and eggs in town, and an annual $500 "subsidy" that Rose sent them (the equivalent of about $6100 today).  Laura's small royalty checks of  $50 and $100 in those first years went a long way toward making the Wilders financially independent.  Finally, in 1938, the books earned enough so that Rose could discontinue her financial support.

But Rose also felt that ghostwriting "juveniles" (in a time when children's literature was not important) would not boost her writing career. In a letter, she wrote that writers of her stature didn't do ghostwriting unless they were desperate for money. She herself was desperate at the time, and ghostwrote five adventure books for the journalist Lowell Thomas, for $1,000 each. But it certainly wasn't something she was going to advertise. Hence the literary deception, which has persisted to this day.

The mother-daughter collaboration was an uncomfortable one, beset by the challenging issues of control and manipulation that troubled the relationship throughout both their lives. As Rose's journals demonstrate, the first three books were produced with difficulty. The two women managed best when they were apart, and in 1935 Rose left the farm. The remaining five books were written by mail: Laura mailed Rose her draft, Rose mailed Laura her rewrite, and Laura submitted the book to their agent.

As a reader of the Little House books, I am grateful to Rose for reworking her mother's stories and using her literary connections in New York to get them published. And I'm very grateful for her leaving a trail in her diary and letters, so that this puzzle could finally be solved, and I could write
A Wilder Rose, the story of Rose Wilder Lane, Laura Ingalls Wilder, and the Little House books they built together.


A Wilder Rose is now available in print and ebook from Amazon and B & N. Check out the website aWilderRoseTheNovel.com if you click on the "Readers/Book Clubs/Libraries" link, you will find additional free 'backgrounders'.
Posted by Jan Grape at 00:01 25 comments