All the World's a Con, Dublin Style

Two weeks ago I wrote about my recent trip to Ireland.  We finished up at the World Science Fiction Convention in Dublin.  Imagine 5,000 plus dedicated fans spending five days discussing books, movies, writing, science, and related issues.  Bouchercon on steroids.  So here are some highlights, and a few, uh, sidelights.

As it happened the first panel I attended was "A Portable Sort of Magic: Why We Love Books About Books."  Oddly enough, it turned out to NOT be about books.  It was mostly psalms in favor of libraries; not that I complained about that.  Genevieve Cogman writes a series of books called the Invisible Library, which (as I understood it) features people collecting books from around the universe.  A.J. Hackwith has written The Library of the Unwritten, about the place that books go if their authors never get around to writing them.  Tasha Suri, who is also a librarian, made useful distinctions between a library and an archive (briefly: an archive stores the only or original copy of something).

She also pointed out that those beloved "little libraries" that pop up on so many street corners are not libraries either.  They are book swaps.  Not that there is anything wrong with that, of course.  And I learned that almost every bus in Hamburg, Germany, has a book swap shelf.  What a great idea!

For some reason I wound up seeing a lot of panels featuring editors, and they were full of startling moments.  For example, one important book editor was not familiar with the phrase "Kill your darlings," which astonished me.

At one panel someone mentioned elevator pitches and editor Patrick Nielsen Hayden quoted what seemed to be a standard joke pitch for (I assume) a TV series:  "He's a chimp.  She's the Pope.  They're cops."  I'd watch that!

There was a panel of anthology editors and I asked: when they solicit stories from authors, what do they tell them about payment?  The editors seemed astonished.  "Nothing!" they declared.  Apparently science fiction authors are much less tied to petty materialistic things than mystery writers...

But the highlight for me was when I attended a panel featuring Wataru Ishigame, who edits science fiction for Tokyo Sogen.  Afterwards I went up to introduce myself and explain our connection but I never got the chance.  As soon as he saw my name tag he said "We publish your books!"  So we had a lovely chat.

I attended interesting science panels on "The Future of Food" and on DNA testing.  I won't attempt to summarize that stuff.

But honestly I didn't attend as many panels as I hoped because the Convention Centre Dublin was overwhelmed.  If you wanted to attend a session at noon you had to forgo any 11 AM session and get in line by 11:30.  It was that kind of crowding.  And the security staff was pretty unbearable, especially on the first day.  (The week before had been Comicon and I wonder if they were, in effect, fighting the last war?) 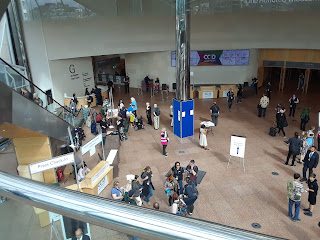 One more story.  I volunteered to work at the Registration Desk on Wednesday and Thursday morning.  During my four hour shift on Thursday my daypack vanished.  I didn't think any member of the public would have been able to steal it so I figured one of the other registration mavens had relocated it.  But no one could find it.

The good news is, it turned up on Saturday, literally minutes before I was going to leave to try to purchase a replacement.  I am very grateful to everyone who hunted for it and made an effort to get it back to me.

But, as they say in management school, it is possible to distinguish between process and product.  While the product was great (got my daypack!) the process had a few bumpy patches.  To illustrate, let me imagine a discussion that must have occurred.  I will try to refrain from sarcasm.

"Hey! Here is the daypack that charming and devilishly handsome volunteer was looking for.  I will take it across the foyer to the Lost and Found desk."
"No, don't do that."
"Ah, I understand.  Because it is the end of the day you think I should take it directly three flights up to the Ops Office where lost objects are locked safely away for the night."
"No, don't do that either.  I happen to know that that volunteer's wife was working in the Finance Office, so take it up there."
"Are you sure she will volunteer there again?"
"No, but it stands to reason if she did one shift she will do another, doesn't it?"
"I suppose so.  Very well.  I will carry the daypack up the five flights and leave a note for her so she  knows it's there." 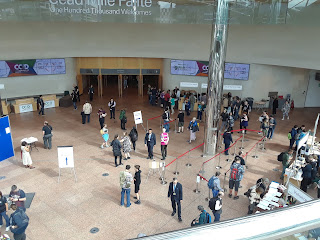 "Don't be silly!  No need to waste trees with paper notes. Just tell whoever is in the Finance Office about it and if/when she returns I'm sure one of the people you mention it to will happen to be there at the same time, will recognize her, remember what you mentioned, and be able to find the pack in the office, which, of course, is not set up to store missing items."
"Yes, that makes perfect sense.  But first I will stroll over to the Lost and Found Desk and tell them so they can stop looking for the pack and delete it from their database of missing objects."
"Again, why this obsession with direct communication?  I'm sure if we simply float happy thoughts in their direction they will grasp that the object has been found and make the corrections to their files."
"Thanks.  Now I understand.  I will  carry the daypack up five flights on the overcrowded escalators the nice security guards asked us not to overuse, rather than simply walking across the foyer to the Lost and Found Desk where any sensible person would expect a missing object to be returned."

Possibly a smidge of sarcasm slipped in there.  I hope you didn't notice.

To be fair, a Worldcon attendee whose opinion I greatly respect told me she would have also decided to bring the bag up to the Finance Office.  I replied: would you have told the Lost and Found folks that it had been recovered?  No, she said, but it would have been a good idea.

I think so too.

Those of you have seen my reports on other events can guess that I am about to include some quotes from panels.  There aren't so many this time because of the issues described above, but here you go...

"We can't put stuff back in Pandora's box but we can slip a warning label on the side." - Aimee Ogden

"A library is essentially a place of possibility." - A.J. Hackwith

"He's the sort of person you have to go into business with or you have to have him killed." - Patrick Nielsen Hayden

"When I originally wrote that novel I had a main character who I fired.  We had a labor dispute." - Benjamin Rosenbaum

"If your voice goes up at the end that doesn't necessarily make it a question." - Ginjer Buchanan

"I love that book.  It should not work.  It annoys me that he's that brilliant." - Laura Anne Gilman

"I am a science fiction writer and that is why I'm not having my DNA tested." -Aimee Ogden

"You have to blame something and it can't be me." - John R. Douglas