In praise of phrase

Back in July I wrote about some new uses of words.  Since then I've noticed some phrases that I want to talk about, and most of them, oddly enough, were coming out of my own mouth.

I thought about the order of those remarks and said: "Well, that's nailing your flag to the mast."

Which it is, but where does that phrase come from?  (It is sometimes given as nailing your colors (or colours) to the mast, colors being a nautical word for flag.)

It turns out to be a very specific flag, and a very specific mast. In 1797 the English navy fought the Dutch at the Battle of Camperdown.   The Dutch were the most powerful naval force in Europe at the time and they set out to prove it.  Admiral Adam Duncan was leading the British forces from the ship Venerable.  Its mast was shot down, taking the admiral's flag.  Since lowering your flag is a sign of surrender both sides watched to see what would happen next.

A sailor named Jack Crawford promptly climbed up what was left of the mast and nailed the flag to the top.  With this bit of daring for inspiration the English went on to win.  By the time the ship reached port Crawford was a hero.  (And like far too many war heroes, he drank himself to death.)

The phrase has two meanings: Crawford's, which is refusal to surrender, and mine, which means, showing your true principles. 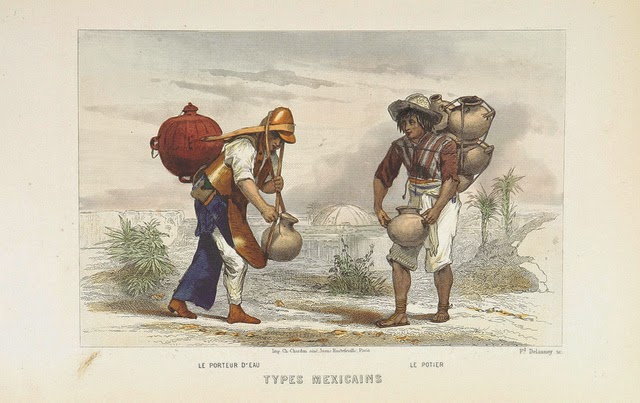 And speaking of principles, one of mine is that you shouldn't claim someone said something they didn't.  Doesn't sound controversial, but all over the web you will find bogus quotations.

Not long ago I saw a picture on Facebook that showed an unflattering shot of Oprah Winfrey, with a pretty dumb quote attributed to her.  Next to her is a flattering photo of Dr. Ben Carson with a witty reply to her comment.  It was set up as if this had been a genuine conversation, but was it?

My immediate reaction: "I don't carry any water for Oprah, but that sounds awfully pat."

You can guess where this is going, right?  To carry water for means to perform menial or unpleasant tasks for someone, presumably because you agree with them on some principle or political point.  It seems to date back to the seventies and is assumed to be based on the water boy, one of the lowest ranked of a team's staff.

But what about the word pat?  It has many meanings, of course, but the Oxford English Dictionary says that by the 1580s it already meant fitting, readily, opportunely.

Which is close to the way I meant it, but not quite.  Merriam-Webster nails it: suspiciously appropriate.

If you said you don't have a dog in that race you are in the majority, according to Google.  127,000 uses of that phrase appear in the Great All-knowing Search Engine.  118,000 uses prefer  fight, which is the way I have always heard it.  I can't help thinking that race is a later euphemism.

As for the compliment, if you said back-handed the Googleocracy supports you.  There are 678,000 examples, compared to to 398,000 for left-handed.
Personally  I prefer left-handed and I am nailing my flag to the mast, southpaw style.
Posted by Robert Lopresti at 00:00 14 comments