In an OAN exclusive, this is Blanca Mujer reporting from the Memorial Coliseum in Phoenix, where faces are lit with ultraviolet wonder. We’re proud to witness elation and, dare I say, vindication sweep among the ballot tabulators recounting the recount of the recount of the recount of the audited, ultra-secure 2020 election. The arena hasn’t seen this much excitement since the 1973 upset of the never-to-be-forgotten Scottsdale Hamsters over the Pima Prickly Pears.

Florida’s Cypher Numnuts is rushing to analyze ballot DNA, certain to be loaded with rice paper and bamboo fibres. Some 40 000 Chinese manufactured counterfeit ballots are known to have been airlifted into remote southwest Arizona, even as Chinese submarines smuggled ashore hundreds of thousands of premarked ballots on America’s Eastern Seaboard to co-opt elections in Pennsylvania, Virginia, and Georgia.

Detecting the lack of official watermarks makes this historic day one of… Just a minute, my producer is signalling me… (taps earphone) OAN interrupts this broadcast with a message from My Pillow. This has been Blanca Mujer, OAN News. 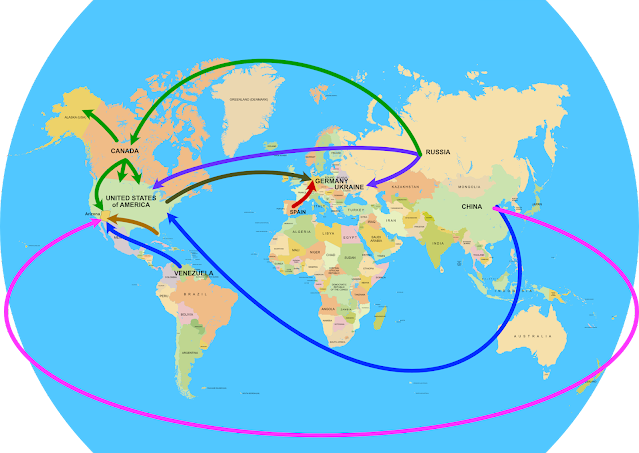 The above scenario is not as outrageous as you might imagine. All of the above-mentioned are among lesser conspiracy theories pursued by stolen-election proponents of Arizona’s challenge to democracy.

Popular theory contends Venezuelan President Hugo Chávez discovered Chairman Mao Zedong had set in motion a blueprint to take over the United States government without firing a shot. Chávez realized the plan could only succeed by seizing control of a Spanish election specialist company, Scytl. In a multi-prong plan, Chávez and the Chinese government sabotaged the US elections with a combination of rigged voting machines and counterfeit ballots.

As Venezuela infected, infested, and injected Smartmatic election machines with a voting virus, China launched a submarine to land prefilled ballots along the Eastern Seaboard. Simultaneously, a low-flying Chinese stealth cargo jet hooked around Cabo San Lucas, flew up the Sea of Cortez and airdropped 40 000 ersatz ballots into Yuma or Pima counties. The Chinese operatives didn’t realize the administration was way ahead of the wily Asians and had imbued official balloting paper with watermarks detectable under ultraviolet lamps.

The amateurish and error-ridden web site of Cyber Ninjas led some (including me) to underestimate the genius of stolen election proponents. The only reason I could think of to explain UV lights shipped into the Coliseum was to seek chemical alterations. Instead, the clever Ninjas first used UV to look for those exclusive but elusive watermarks.

Not finding them implied every single ballot was fraudulent.

Knowing opponents tended to be obsessed with facts caused the Cyber Ninjas to dig ever deeper. They deployed indirect lighting to examine the infilled ovals on the theory vigorous voters would dent the paper under Nº 2 pencils contrasted with mass ‘xeroxed’ (presumably photocopied) ballots shipped into the state. Unfortunately, the preferred Sharpie pens left little or no dent.

That resurrected an earlier theory regarding the Keystone Pipeline that ran from Communist Canada to the Gulf of Mexico, suspiciously not delivering oil to the states over which it ran. The pipeline was actually a giant pneumatic tube devised to distribute paper ballots from the great forests of our northern neighbour to Putin Russian-Ukrainian allies in the States. Remember these tubes… we’ll return to them momentarily.

To solve this international mystery, we turn to Texas Congressman Louis Gohmert, supported by Arizona dentist Paul Gosar, DDS, and famed attorney, Sydney Powell, esq. Bear with me, as reported by NewsMax, OANN, and InfoWars, this is convoluted.

Shortly after the election, feelers put out by a dejected, desperate, but determined Sydney Powell returned intel of electronic voting irregularities involving British Smartmatic SGO machines in Venezuela, but also Scytl SA devices built in Barcelona, Spain. Scytl computers in Frankfurt were pre-programmed to manipulate election results while hiding the true election map at the direction of US Army Intelligence, the NSA, and particularly the CIA.

It’s unclear if Lt. Gen. Thomas McInerney notified Powell or if Sydney Powell contacted him, but she organized an assault team to confiscate Scytl computers. She brought in disgraced former Lieutenant General Michael Flynn, who’d confessed working for Russia and Turkey, and lied to Vice President Pence and the FBI. Powell called upon Flynn to redeem himself by hand-picking USEUCOM US Army loyalists from the 305th Military Intelligence Battalion (the Kraken) for an assault in Frankfurt to seize the servers. When Secretary of Defence Mark Esper balked at the operation, Flynn and Powell ordered him fired and replaced by Christopher Miller.

According to on-the-ground German tweets, the raid was a partial success, although one woman and five or six (the record is unclear) Army Special Forces men lost their lives in the attempt. How Cyber Ninjas became involved is also unclear.

The Arizona investigation has triggered a disastrous side result. The unexpected ballot examination ordered by the Arizona Senate has aroused panic amongst Deep State forces in Georgia, Virginia, and Pennsylvania. They couldn’t call back a Chinese submarine to retrieve the bogus ballots, so instead, they flushed them down the Colonial Pipeline.

Unlike the Keystone Pipeline, this one actually carried petroleum. Similar to your home’s sewage lines, those millions of dumped ballots hopelessly constipated the Colonial’s series of tubes. A naïve press blamed the clog upon innocent Russian hackers.

To Provoke and Serve

While naysayers mock the partisan efforts as theatre and compare the recount to the Crazy Times Carnival and Clown Show taking place next door to the counting house, Arizona treats each conspiracy contention seriously. Cyber Ninjas reportedly hired a local private militia called the Arizona Rangers to provide security. Although these fake ‘rangers’ have neither police nor security training, they reportedly look and act like aggressive cops chasing away nosy reporters. They manifest more interest in deterring scrutiny than protecting the voting equipment chain of evidence.

Meanwhile, Cyber Ninjas has demanded the Maricopa Sheriff’s office turn over county routers to them. The sheriff has refused, raising the threat of a subpoena from the Arizona Legislature. To date, web sites aligned with Q-Anon appear relatively silent whether the Arizona Rangers militia or the National Guard should seize the routers.

Thinking they must mean servers (which Cyber Ninjas claim have been tampered with), not routers, I discussed this with my friend and colleague Thrush, a founder of MagicNet and one of the top network experts in the Southeast. Between the two of us, a networking guru and a fraud forensics specialist, we cannot conceive of any useful information that could be gleaned from a router. We’re convinced Cyber Ninjas don’t know what the hell they’re doing.

We also discussed wifi routers discovered on the ballot counting floor by alarmed observers. Cyber Ninjas claimed the routers were turned off, never mind their very presence and the blinky-blinky bits. I suspect they had shut off the SSID display and not the wifi radios, meaning they were very much active but invisible to the outside world.

This has been a particularly difficult article due to the fluid nature of the madcap Arizona recount. Conspiracy theories rapidly rise and fall and rise again with renewed life, without regard to the writer trying to capture competing hypotheses.

Haboob (an Arizona desert girl, hence her name) remarked the presumption of conspiracies cause believers to create realities around them. I might add to that never-ending conspiracies. I can hardly believe the election occurred half a year ago.

Right now, the voting equipment and pallets of ballots have moved into non-air-conditioned storage in a fairgrounds building too hot to work in. Experts and the US Department of Justice complain that in addition to breaks in the chain of custody and UV damage, the intense Arizona heat (well in excess of 50ºC, 122ºF) causes ballot paper to break down. Arizona Senate President Karen Fann told them to mind their own business, which of course they were.

A dismayed viewer can’t help but wonder if the heat also causes brain damage.
Posted by Leigh Lundin at 01:01