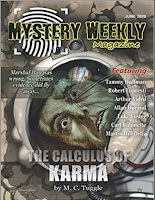 I have a story in the June issue of Mystery Weekly Magazine, and for that I must thank Barb Goffman, who was my inspiration.  Sort of.

I came up with the idea and the title for the story decades ago but I couldn't see a market for it so I never bothered to write it.  Then, last year, Barb announced that she was going to edit an anthology called Crime Travel, featuring crime-related tales of time travel.

And I realized my old idea fit. Sort of. It was about a physicist who hoped to invent time travel, only to discover that that is impossible - however, it turned out that he could travel through an apparently infinite number of universes.

I asked Barb if that concept might fit in her book, and she said it might.  So I wrote the story.  And Barb rejected it, as she had every right to do.

But heck, I had my story now.  Might as well look for a market.  Mystery Weekly Magazine had published one of my stories last year, a tale with a science fiction bent.  So I sent it to them and voila.  Decades after it was first dreamed up, "In Praise of my Assassin" is available now for your reading pleasure.

It's about time.
Posted by Robert Lopresti at 00:00