by Steve Liskow
My wife Barbara claims she has acted in about 80 productions, but I'd say it's at least twice that many. Since we met, she has played Lady Bracknell in The Importance of Being Earnest, Martha in Who's Afraid of Virginia Woolf?, several Shakespearean roles including Feste in 12th Night and Paulina in The Winter's Tale (I directed both of those) and one of the neighbors being spied upon in the Hartford Stage Company's world premiere of the stage adaptation of Rear Window starring Kevin Bacon. She also had a cameo in the remake of that film starring the late Christopher Reeve. Since she also has a reputation for being very good at learning lines, we found ourselves trying to explain what makes dialogue effective...or not.

Last Wednesday, we earned a little extra cash by acting in a training video for caregivers. We've worked with the director and crew before, and they're great: patient, organized, funny, and very good at what they do.

We met the "nurse" in our scene Tuesday for a read-through and shot the six-page, eight-minute scene the next morning. We arrived at 7:30 a.m. for make-up (They had to age me ;-))) and finished a little after noon.

People who aren't used to the routine say, "JEEZE, why so long for eight minutes?" 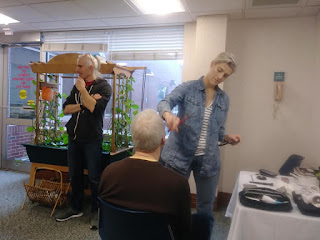 Well, we had to do five camera set-ups, one on all three of us at a table, one of Barb and me, and one of each of us, which will be edited together later for the best flow. That meant moving the camera and furniture in a small space and tweaking the lights and microphones for each different angle.

Another problem was that because the video is for training caregivers to follow specific guidelines, the nurse's lines had to correspond to the language on a checklist and a training manual. They don't flow trippingly off the tongue and they get repetitive. That means actors can get lost, especially when you start and stop a few times.

I had two speeches that were completely different, but my cue lines were 22 and 20 words, 18 of them the same. For one take, the director wanted to start at one of those cues, and I had to ask, "Is this my first or second response?" because that was the only way I could keep them straight.

If you're writing a short story or novel, that's not a big deal, but if you write for the stage, it becomes crucial. You need to write lines the actors can learn. Remember, we had only one rehearsal and a four-hour shoot to get everything correct five times.

Most of what we say today is geared toward plays, but you can apply it to stories and novels, too.

There are two ways to link (connect) lines so an actor can remember them. When Character A reacts or responds to Character B, it draws the audience into the scene and gets them involved. You can do this with either an ACTION CUE or a LINE CUE.

An ACTION CUE is an event that prompts the character to speak. For example, there's a knock on the door, and the character asks, "Who is it?" If you're writing a story, you can use an action tag here.

When she heard the knock on her locked door, Sarah asked, "Who is it?"

A LINE CUE is the word or sentence the actor talks back to. KIND playwrights (They are rare) often repeat key words in consecutive speeches between two characters. Repetition is best if it's an important verb or noun in the first sentence. If it's not a repeat, a synonym will help.

Sometimes, Character B's speak begins with a sound or letter that was prominent in Character A's speech.Strong Consonants like "P" "T" or "S" are common because they're so audible.

Questions and answers are usually easy to remember. So is cause and effect, where B says something as a response to what Character A did or said. This is a lot like the ACTION CUE.

Chris Knopf uses repetition and synonyms when his series character Sam Acquillo talks with local cop Joe Sullivan. The two paraphrase and mangle each other's previous lines, sometimes turning them into puns or malapropisms. It's funny, but it also adds tension and energy because it shows the two are listening to each other while they butt heads.

American English gains its meaning and nuance from rhythm. In dialogue, the two strong positions are the beginning or the end of a sentence, especially the end. That's where you should put the speech's main point (see what I just did there with the slightly unusual word order?).

I'm afraid the case is past human skill. Prayer is our only resource now, John.

That's weak. The important word (prayer) gets buried in the middle. Try this instead:

I'm afraid the case is past human skill, John. Our only resource now is prayer.

Can you hear and feel the difference?

If you use names--usually direct address--in dialogue, a name at the beginning of a speech tends to make a stronger line, probably because it focuses attention more quickly. It helps indicate the relationship (power) between two characters without the audience being aware of it.  A name at the end tends to be weaker because it creates a falling rhythm.

If you're writing comedy, put the point or punch at the end. If you want a laugh, you need the joke in a strong position.

Let's be practical, too. If, in spite of the weak position, the punch gets a laugh early, that laugh will drown out the rest of the line. The audience might miss information. It's also hard on the actor. Think about the action/line cue when you're setting up a joke, too.

Dialogue helps everyone understand what the goal is and how the character tries to achieve it. It also can show the nature and magnitude of the obstacles.

A asks the question to get information. B answers because she has the information and wants to help. There MAY be more going on here– flirting, a power game, whatever. Maybe one character is suggesting that the other one is late...again.

Is A a nurturing mother, a sadistic torturer, a waiter, or something else?
Is B a child, a captive, a customer, or a potential love conquest?

An indirect answer can add tension.


A:  Can I go in and see him?
B:  Over my dead body. (Or, Not without a warrant, Or, Not until he regains consciousness, Or, Haven't you done enough damage already?

Using specific words and images will make it easier for an actor to learn his lines and develop his or her character, too. 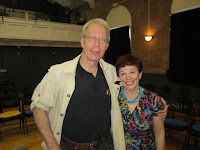 We'll talk more about dialogue and character next time.