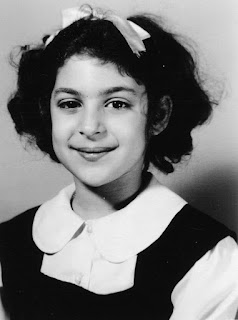 I can't find a childhood picture of myself in glasses, although I wore them full time from the age of eight. I learned at my mother's knee that when the cameras came out, the glasses came off. That's because girls and women who wore glasses were considered hideously ugly. A much used Hollywood trope was the young woman, a secretary or some other kind of subordinate, who was invisible to the hero until she took off her glasses and was transformed like Cinderella. I remember the day I first got my glasses. I hated them. I hid in the bushes in front of my house, afraid a passing neighbor might lay eyes on my spectacled ugliness. 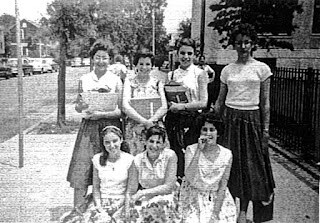 Nonetheless, I needed my glasses. Remember that giant E on the eye chart? I couldn't see it. I saw white with a slight gray smudge. Here's a rare sighting: Liz (standing, left) in seventh grade with girlfriends. 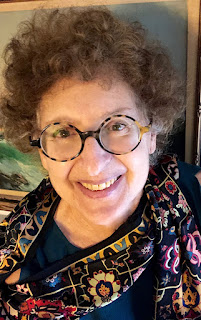 Glasses have changed, and so have attitudes toward women as well as our perception of ourselves. I get constant compliments on my current specs. More important, I think I look adorable in them. Anyhow, I've worn glasses more or less all my life. Every year I've dutifully visited the eye doctor and gotten my prescription changed. 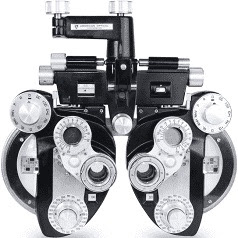 A year or two ago, my glasses stopped working. I had to peer at the computer screen to distinguish an 8 from a 6. But changing the prescription didn't help. No matter how the ophthalmologist flipped the lenses in the refractor as I stared and even squinted at the chart, the numbers kept dancing around. What was wrong?

Fact: 100 percent of people get cataracts. Once I decided to have the surgery, I discovered that everyone I know from junior high and high school had either had it last year or were about to have it. It's one of those age-appropriate things we all have in common, like memory lapses and hearing loss.

Once I started asking questions, I learned that there are choices involved. There are lenses the insurance pays for vs those they don't. You can end up not needing glasses in general but be unable to read without reading glasses. Or you can go on wearing glasses, but you'll still be able to read when you take them off. Or if you survive the Apocalypse but there are no glasses in the dystopian future. The surgeon can use a laser instead of a knife, but it costs extra.

Does it hurt? Not at all. The eye is numbed with dozens of drops so there's no sensation of invasion. Is the patient awake and aware? It depends. The anesthesiologist explained that I'd be sedated, but not too much, since the surgeon might need my cooperation. Yes, yes, I knew what "disinhibition" meant.

The first time, I did experience time passing. It took half an hour for the surgeon to remove the cataract and the natural lens and install the implant that replaced it.

At one point, when all I could see was gray, I said, "I don't have vision right now, do I?"

The doc seemed disconcerted. Maybe I should have explained writers always want to know every detail. We never know when it might come in handy.

Other eye, two weeks later. I asked to be sedated a tad more heavily. I didn't sleep through it, but before I knew it had begun, I'd already forgotten it. Just like a colonoscopy, another age-appropriate...but I digress.

Next came a regime of eye drops: four weeks daily in each eye. The drops contained tiny quantities of several heavy-duty meds, including the steroid prednisone. I was prescribed some of that for an ear infection once and was manic for two weeks. I wrote two brilliant short stories in ten days, though. But I digress. Again.

While I was taking the drops, my eyes were healing and the implants settling into place. I had to wait six weeks for glasses for my new eyes. But even with my distance vision too blurred to drive, I saw better than I had since I was eight years old—maybe ever. Throughout the recovery period, I could read, watch videos, and use the computer.

And now I can see everything, from the fine print on a label to a street sign a block away. I love my new eyes.

My grandmother, who was born in 1878, was blind in one eye. It was just a cataract. In spite of everything that's wrong with the world right now, in some ways I feel very, very lucky to live in the twenty-first century.
Posted by Elizabeth Zelvin at 00:01