My first memory of LSU football was listening to the LSU-Ole Miss game on All Saints Day, November 1, 1958. I sat with my father at our kitchen table with his transister radio and he explained about the LSU Fighting Tigers and their arch-rival University of Mississippi (Ole Miss) Rebels, how both were undefeated, both in the top ten. Ole Miss had defeated LSU the previous year 14-12. The Tigers scored first but we fretted as Ole Miss was a excellent team. LSU scored again and won 14-0. On New Years we watched LSU play the Clemson Tigers at the Sugar Bowl in New Orleans and the Fighting Tigers won 7-0, cementing their first national championship. I was hooked for life.

The next year we sat at the same kitchen table and listened to the same transister as Billy Cannon raced 89-yards with a sizzling punt return in the 4th Quarter, breaking seven tackles, to put #1 LSU ahead of #3 Ole Miss. The Rebels weren't finished, driving to the LSU 4-yard line. First and goal. With 18 seconds left, Billy Cannon and Warren Rabb stopped Ole Miss quarterback Doug Elmore on the 1-yard line on fourth down for a 7-3 win. It was electric. The following week, LSU lost to Tennessee 14-13 and lost a rematch with Ole Miss in the Sugar Bowl, 21-0. 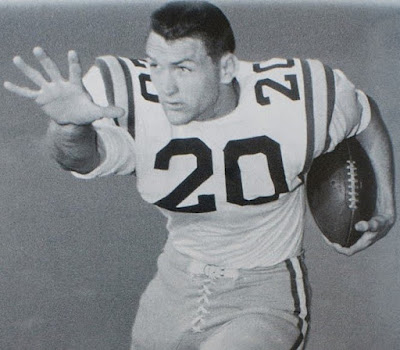 A near-perfect season followed in 2011, only to be dashed in the national championship game with a re-match with Alabama in the Sugar Bowl once more. Alabama 21 LSU 0. Alabama was coached by Nick Saban who was LSU's coach when the Tigers won the championship in 2003.

Few expected what happened last season. Magic. Perfection. Nothing is perfect in sports. With a new Cajun coach Ed Orgeron and a quarterback from Ohio, a new pass-happy air-raid NFL-stye offense, the Fighting Tigers went 15-0 and beat defending national champion Clemson Tigers (again) for the national championship. In the New Orleans, of course. LSU 42 Clemson 25. LSU scored the most points of any team in a single season in NCAA history. An unstoppable force. 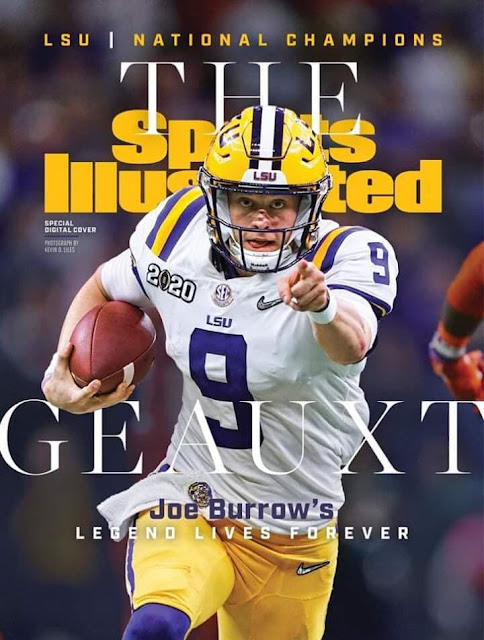 A perfect season. In the small town where I live across Lake Pontchartrain from New Orleans, fireworks echoed after the game. People leaned on their car horns. It was perfect. No season could be better. Quarterback Joe Burrow (who wore a jersey with the French spelling BURREAUX before the SEC championship game) won the Heisman Trophy sixty years after Billy Cannon won.

Quarterback Joe Burrow's emotional acceptance speech when accepting the Heisman Trophy showed the pride brought to Louisiana and this young man's appreciation of the opportunity. His remarks about growing up in an impoverished area touched many people. As he wiped tears from his eyes, Joe said, "I'm up here for all those kids in Athens and Athens County (Ohio) that go home to not a lot of food on the table, hungry after school. You guys can be up here too." Those impactful words resulted in the food bank in Athens County receiving donations exceeding $500.000.

This Fighting Tiger team was special.

It was a pleasure watching these young men and women achieve what is nearly unachievable, see the joy in the faces of their families, fell the good vibrations run through our little state. Pride. I said women because when they won the national championship, Joe Burrow reminded everyone it wasn't just the players who won the trophy. It was the coaches, trainers, medical personnel and so many other workers responsible for putting the team on the field, many of them women.

Coach Ed Orgeron, from the small town of Larose in Lafourche Parish, Louisiana, is a fiery leader with a heavy Cajun accent. He ends every interview with the new montra of LSU – "Go Tigahs!" 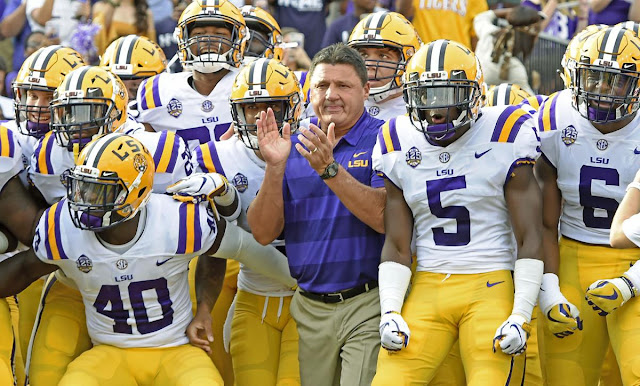 During games, when they run, they look like streaking tigers, especially at night. Purple, gold and white. For a little while, it's the best of times.

I know, this is a writer's blog and what does this have to do with writing. Well, a SleuthSayer wrote it.