Many of those people, places and experiences – or any number of funhouse versions of them – have made appearances in my subsequent fiction since I started writing back in the late 1990s. Just this year I did the previously unthinkable (at least to me): I actually wrote crime fiction based in large part on my experiences in the Navy. So large, in fact, that it was set on a naval base, with an unnamed quartermaster (navy quartermasters are expert navigators, not, as I had to explain to my Army veteran father, supply department personnel.) as the point-of-view character.

I say "unthinkable" because during the lion's share of the thirty years since my honorable discharge in 1989, I've had a "complicated" relationship with my four years in the Navy. I won't go into the details, but for the longest time I looked back on my years on active duty through a pretty dark lens.

It was only with the wisdom which (hopefully) comes with age that I've been able to make a sort of peace with the memory of those years. I made great friends. I am a different person for having done what I did. I made mistakes which, in retrospect, can only be described as both life-changing and educational. 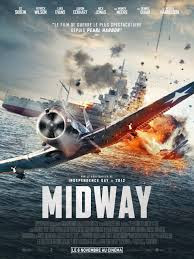 And, most importantly, I am a vastly better person for having served. And that helps give me balance, and fills me with pride.

But that's just background. It's not really what this post is about. If anything it's intended to establish my bonafides for why my readers (BOTH of you!*rimshot*) ought to give credence to my thoughts about the new Roland Emmerich war epic, Midway.

So, while I didn't serve during World War II (my grandfather did), I did serve in the Navy. What's more, when I was a kid, I was obsessed with the war in the Pacific theater. Specifically, campaigns like Guadalcanal, Saipan, Tarawa.

And, of course, the Battle of Midway, the turning point of the war, where the outnumbered, outclassed U.S. Navy laid a trap for the vaunted Imperial Japanese Fleet, and over a couple of days cut its carrier force in half. Four aircraft carriers, the Hiryu, Soryu, Kaga, and Akagi formed the backbone of the Japanese task force intended to take the island so that it could be used as a staging point for a proposed conquest of the Hawaiian Islands. 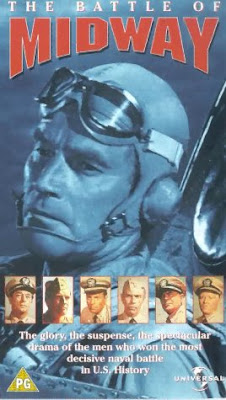 The dive bombers and torpedo planes of the U.S. Navy sank all four of them in this single engagement. American losses totaled a single carrier (U.S.S. Yorktown) and a cruiser (U.S.S. Hammann).  This hammer blow from which the Imperial Japanese Fleet never recovered was the first significant American naval victory in the Pacific Theater, and, as I said, the turning point of the war there.

There have been other film treatments of the battle, most famously Midway (1976), which featured both actual archival footage from the battle, and an all-star (and all aging) cast, headed by Charlton Heston. It's worth a look, especially for Heston (who is great as usual), for the combat footage, and for Henry Fonda as Chester Nimitz.

So how does Emmerich's take on this landmark moment in 20th century history hold up? For my money, the result is mixed. Emmerich, who has made his name most famously for helming the sci-fi "Aliens-Are-Not-Our-Friends" epic Independence Day and a string of natural disaster movies, plays to his strengths here.

Emmerich's Midway is thinly-plotted and frequently visually arresting. Screenwriter Wes Tooke's flat script gives the terrific cast nothing much to do other than give long "as you know..." speeches intended to convey contextual backstory, while also serving as the sorts of square-jawed archetypes so often found in patriotic war movies.

The great strength of the film is unsurprisingly the combat scenes. It's not just Midway which gets the Emmerich treatment here. The Japanese assault on Pearl Harbor, and Lt. Col. James Doolittle's famous bombing raid on Tokyo also get some screen time as part of the set-up of for the titanic struggle at Midway.

These moments are by and large faithfully executed, with a refreshing amount of attention to detail paid by the film (the Japanese planes strafing "Battleship Row" in Pearl Harbor is just a single example). The CGI for the most part holds up pretty well, although there are a few places where it breaks down. A funeral scene set in a cemetery overlooking Pearl Habor comes to mind. The rows of white crosses serving as background for the beginning of said scene looked fake, almost like they were silent film era painted background scenery pulled from a basement somewhere and dusted off for this movie. It's a distraction.

The equipment, locations, costumes, etc., are also pretty impressive. And Emmerich is to be commended for this. Because these are the sorts of things that the "Hollywood Treatment" usually gets wrong. Especially ships, planes and uniforms.

The things this film gets wrong about Navy life are both unsurprising and small. I served aboard a number of ships, and visited friends on countless others. I've seen my share of shipboard berthings both in the modern Navy and doing archival period research. I have never seen actual berthings which were as spacious and easy to get through as the ones onboard the U.S.S. Enterprise in this film.

I've also been on the flight deck of an aircraft carrier when it was underway. Even with the ship moving at a slow speed, the wind is ever-present, noisy, and frequently capable of sweeping an unsuspecting fully-grown man across the deck like a tumbleweed across a street in a John Wayne film.

So the sorts of full, back-and-forth conversations which crop up on the Enterprise's flight deck over the course of  this movie are, to be charitable, implausible. Also, note to Mr. Emmerich: wind tends to ruffle hair and blow loosely-worn hats (called "covers" in the Navy) right off the wearer's head.

And speaking of wind, there is NO WAY some of the conversations taking place between several of the dive-bomber pilots and their machine-gunners while in flight could have happened. These guys aren't talking via radio. They're shouting at each other across a space of several feet, around the frames of their open cockpits, and while seated just a few feet behind their plane's single engine/propellor.

Anyone who has ever flown in a prop job knows these sorts of conversations were physically impossible. The wind, the engine, the propellor? WAY TOO LOUD.

Where Emmerich gets it right are in the bombing runs and dog fight scenes. After watching this movie I think I have a vague notion of what it must have felt like to fly high above the clouds, heel over and point your plane's nose straight down at the deck of a Japanese carrier far below, gaining speed the closer I got to the deck, flying through the teeth of a hail of steel intended to shred both myself and my plane, only pulling up just short of my target, and after having delivered my payload. 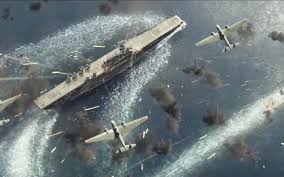 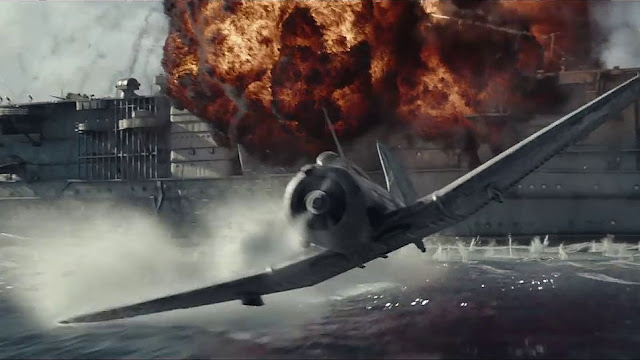 "Courage" doesn't begin to describe what these heroes demonstrated.

And to his credit, Emmerich seems bent on celebrating them.

Good. Names like Dick Best, Wade McCluskey, and Clarence Dickinson ought to be household words in the United States. Right up there alongside those of admirals such as Nimitz, Halsey and Spruance. Hopefully this film will help, in some small way, to make that happen. If so, better late, than never.

So in conclusion: Midway – a mixed bag. I'm glad I saw it in the theater, and while it has its short-comings, it plays pretty straight with the facts (For what it's worth, Midway gives a more than fair airing of the Japanese side of the conflict), the performances are solid, and the combat scenes alone, conveying as they do the awful eye-catching, horrific, kaleidoscopic, terrible magnificence of war, are worth the price of admission.

And that's it for me. As always, Your Mileage May Vary.