by John Floyd
Two weeks ago I attended my sixth Bouchercon mystery convention, in Dallas. My wife Carolyn and I drove over from our home in Mississippi, partly because I don't fit well in airplane seats and partly because I just don't seem to have the patience anymore for all the mumbojumbo at the airport. (I really need to try to trade all those frequent-flyer miles left over from my IBM career for something more useful, like frequent-moviegoer tickets.) Anyhow, our mode of travel for this trip was private automobile instead of commercial aircraft, and except for running into a rainy cold front halfway there, we had a pleasant and enjoyable drive. 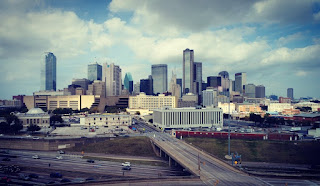 I also enjoyed the conference. I've heard some writers say they prefer smaller gatherings, but one reason I like Bouchercon is that it IS big, and therefore attracts a lot of writers, some of whom I know from earlier meetings and some from a computerful of emails and blog posts. I also like the fact that it includes readers as well as writers. I'm not saying I have a lot of groupies--my fans are mostly my publisher and my wife, and I'm not always sure about my wife--but it's impossible to write a lot for mystery magazines and not occasionally run into folks at a mystery conference who tell you they like your creations (whether they really mean it or not). And where else can you spot literary heroes like James Patterson, Sandra Brown, Lawrence Block, Elizabeth George, Laura Lippman, Robert Crais, and so on, in the wild? Or sit down and meet face-to-face with your editors? Very few of mine live in the sunny South.

Let me say one thing, up front. I don't go to Bouchercons for the panels and other events. I do attend them, and I always enjoy them and learn something, but that's not my primary reason. I go to Bouchercons to reconnect with old friends and meet new ones. I did a lot of both, this time.


Highlights of this year's conference, for me: 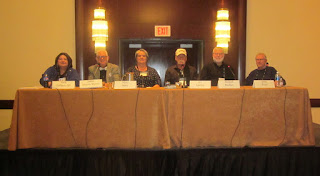 - Short-story panel. I was on only one panel this year, and I had fun there--probably because it was made up mostly of longtime friends. It was called "Short and Sweet--and Sometimes Dark," and featured me, James Lincoln Warren, R.T. Lawton, Mysti Berry, Michael Bracken, and (moderator) Barb Goffman. Four of us are current inmates at the SleuthSayers asylum and one (JLW) was my master and commander at SS's predecessor, Criminal Brief, for four years. NOTE: If there are better panel moderators anywhere than Barb Goffman, I have yet to meet them. She's wonderful.


- Catching up a bit with old friends. I won't try to list them here for fear I might leave someone out, but you know who you are. In this sense, Bouchercon always feels a little like coming back to school after summer vacation and seeing all your pals again. 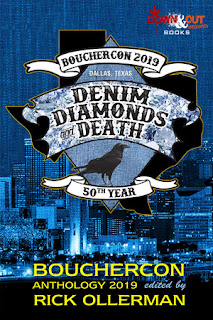 - Signing of the 2019 Bouchercon anthology. I knew only the editor and two of the other contributors, one of whom was unable to attend B'con this year, but we had a good time at the "release party" and a big crowd in the signing line. Those of you who have done this in the past know it's a fun session, and this was also the first time I'd seen the new book, which is always a thrill. Several folks even brought copies of previous Bouchercon anthologies to be signed--I've been fortunate enough to be featured in the most recent four (this one, Florida Happens, Passport to Murder, and Blood on the Bayou).

- The book room. This is always a place to run into people you've been trying to catch, and I love browsing the shelves even though I already own far too many mysteries. I especially enjoyed visiting with Don and Jen Longmuir, who this time oversaw the bookroom but didn't represent their own store (Scene of the Crime Books in Ontario) and who have always been SO good to me in selling the books I bring to Bouchercons. I also had a great time talking with Joe R. Lansdale and his daughter Kasey, who are both wonderful writers, at their book tables--I thought I owned all of Joe's novels and story collections, but I found and bought a few more from him this trip. (Another reason I like Joe Lansdale: He's from East Texas, so I can understand him when he speaks.)

- Signing at the MWA tables. Those who participated were given a half-hour to sit and sign anything anyone brought to us--books, anthologies, magazines, programs, etc. This turned out to be (as expected) more of a visiting session than a signing, but I think it worked. I was seated beside Charles Salzberg and thoroughly enjoyed our time together. That's the great thing about this kind of event--I probably wouldn't have even met Charles otherwise. Thanks, Margery Flax, for assigning me a table.

- An informal get-together of the contributors to Michael Bracken's new P.I. anthology, The Eyes of Texas (which takes the prize, I think, for the best title I've ever seen for an anthology, along with Barb's upcoming Crime Travel antho). About half the authors in Eyes of TX were there, and it was great seeing the ones I knew and meeting the ones I didn't. I admire them all. Some of us even had dinner together the first night and lunch the next day. 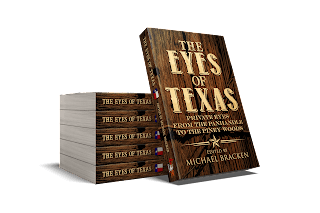 Overall, I thought this was one of the best Bouchercons I've been to. The hotel, the events, the guests of honor, the location, the food, everything--except maybe the weather, the first couple days--was excellent. I've heard some horror stories about some of the B'cons I missed, over the years, and I'm glad this one worked so well.

As for regrets, I have only two. One is that I missed seeing several people I had really hoped to meet or reconnect with: Jan Grape, Jim Wilsky, Cathy Pickens, Paul Marks, Jane Lee, Earl Staggs, Greg Herren, Marcia Preston, Dennis Palumbo, a few others, Maybe next time. My other regret is that the Bouchercon anthology signing happened to be scheduled in the same time slot as several other sessions I would have enjoyed attending: the presentation of the Derringer Awards, a Bill Crider tribute, and an Elizabeth George interview. I missed all three, but (as I mentioned) I had a good time at the signing.


So, those are my observations. Did you attend this year? If so, what did you think? Have you also attended Bourchercons in the past? How many? Which of those do you think were the best? Do you plan to make Sacramento next year?

As for this year's conference, I thought it was a great four or five days, spent in the company of friends and acquaintances and my wife and 1800 writers and readers who love mysteries. What could be better than that?
Posted by John Floyd at 00:01