by mystery guest
Welcome to October, the month of everything spooky. So it seemed a no-brainer to me to invite a good friend of mine to guest blog today on SleuthSayers because she just had a short story come out in an anthology all about clowns. Yep, those guys and gals with face paint and big red noses who sneak out of your closet at night and … well, I'm not sure what happens next. I've never minded clowns myself, but I know they scare the bejesus out of a lot of people. So if you're one of them, or if you happen to like clowns, this blog post is for you. If you enjoy funny authors and funny crime short stories, this post is definitely for you. And if you've read this far, then you'll certainly want to keep reading, because here, finally, comes the good stuff. I hereby present my friend Eleanor Cawood Jones. 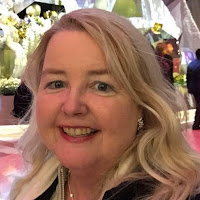 Recycling. I’m into it; chances are you’re into it. But now I’ve gone and recycled a clown. I don’t know that it’s particularly beneficial to the environment, but it’s sure been a lot of fun.

Enter backstory, stage left: Many, many years ago (okay, 2015, but who’s counting?) I was fortunate enough to receive an email containing a writing prompt and instructions from my friend Gretchen Smith. It went pretty much exactly like this: “Here’s the call for Malice Domestic 11. Write this now.” Well, lo and behold, the call was for convention-themed mystery short stories. And had I not once been snowed into a casino-hotel in Green Bay, Wisconsin, during an ice storm where there was a clown convention going on?

I had. (Could happen to anyone, right?) And if that’s not fodder for a murder, I must ask you what is.

And this is where my God-given ability to attract weird paid off, because “Killing Kippers” became my first traditionally published short story in Malice Domestic 11: Murder Most Conventional. And believe you me, I never thought anything good would come out of that convention experience. This after an initial run through Gretchen, who turned a laborious two pages into one catchy paragraph at the beginning, and a second laborious edit by Barb Goffman, who gave me some of the best advice I’ve ever gotten from an editor.

I’d gone on and on in describing the action, and Barb’s words were simple. “Don’t do this to yourself.” So I turned all that snore-y prose into dialogue, and it allowed me to keep the description, add some humor, and keep the story moving. I think my friendship with Barb was largely born through revisions on that story. I believe she brought out the best story I had in me.

Yeah. … This was supposed to be a short bit about a recycled clown story, but as I’m writing it’s turned into a reflection on good friends, a sharp poke in the arm when you need to get going, and good editing advice. Because that story, although it remained largely intact from the first draft, took a village, and I was so utterly proud when it made it into print.

I was proud, too, because it’s the only story I may ever write where the point of view is first-person-drunk. (Don’t judge—I was surrounded by clowns for four days at a bar. How would YOU have coped?)

Many, many years later (this year) Barb sent me a call for an anthology based in England that planned to turn the clown stereotype on its ear. There are all those books and movies about scary clowns—but what are clowns afraid of? What’s behind that face paint and big red nose? The editor, Dave Higgins, said he’d accept reprints, and I shipped Kippers off to him.

Later, I was so delighted to hear that Kippers was going to be resurrected in the UK in Bloody Red Nose: 15 Fears of a Clown, and with co-authors who are largely from the horror genre to (oversized, floppy) boot. Delighted right down to my British Isles DNA. And now it’s out– official release date was Friday the 13th. Bwah ha ha! With this phrase on the back cover from Dave: “In a world filled with menace, dare to paint on a grin.”

So now … she’s ba-a-a-aaack! Kippers is here, along with fourteen other stories sporting titles like “Corn Stalker” and “The Killer Clown Massacre” and “Clowns on the Run.” And I've had the personal excitement of finding an editor and fourteen other authors I’d never met before. If you’d like to try something different and new I invite you to pick it up and enjoy. It’s a delight and joy to be in this new book with a revitalized story. And a horror writer? Never thought of myself that way. But, heck, if former nun Alice Loweecey can do it, why can’t I? (Insert evil grin here.)

So that’s this week’s recycling. Or maybe reincarnating. Yeah—a reincarnated clown. There’s a story in there somewhere, right? Maybe I’m a little bit of a horror writer after all.

Who else writes or reads in more than one genre, and was it by accident or design? For me it was as accidental as stumbling into a clown convention. But did I mention that could happen to anyone?

Eleanor Cawood Jones began writing in elementary school, using #2 pencils to craft crime stories starring her stuffed animals. Her stories include “Keep Calm and Love Moai” (Malice Domestic 13: Mystery Most Geographical) and “All Accounted For at the Hooray for Hollywood Motel” (Florida Happens). Coming soon: “O Crime, in Thy Flight” in Crime Travel and “The Great Bedbug Incident and the Invitation of Doom” (Chesapeake Crimes: Invitation to Murder). A former newspaper reporter and reformed marketing director, Eleanor is a Tennessee native who lives in Northern Virginia and travels often. You’ll find her rearranging furniture or lurking at airports.

Bloody Red Nose is available in paperback and ebook in all the usual places, including Amazon and Barnes & Noble. And you can find Eleanor on Facebook under her full name and on Twitter under @eleanorauthor.
Posted by mystery guest at 00:00