by Lawrence Maddox
Beatniks and Bad Guys was nearly the sole title of this piece, but I felt it just wasn't cool to leave Barry Gifford off the headline. Gifford is, after all, the Kerouac of crime fiction.  David Lynch's connection to Gifford's Sailor and Lula crime-novel series, beginning with Wild at Heart, also warrants room on the marquee. Though I like the way Gifford's writing blows Beatnik riffs in a film noir world, it was Gifford's non-fiction that grabbed me first.

Before cable, film noir (and crime film in general) was all over TV. If you we're a kid planted in front of the small screen,  you we're bound to come across films like The Big Sleep or The Big Heat or The Big Knife. If you weren't put off by black and white, and you liked the dirty dealings, the thrilling bad-assery of it all, likely you were hooked. Those movies kick-started my interest in film, and like most film buffs, I read what I could about how these flicks came to be. When I came across Barry Gifford's love letter to crime cinema, The Devil Thumbs a Ride, I knew I'd come across a kindred spirit. 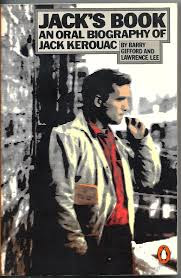 It wasn't just the subject matter of Gifford's The Devil Thumbs a Ride that intrigued me; it was the soulfulness of his writing, the off-kilter way he came at crime films. When I discovered that Gifford's first non-fiction book was Jack's Book: An Oral Biography of Jack Kerouac, it started to make sense. Gifford had one foot in Birdland and one in Chinatown. He was a Beatnik who dove deep into crime fiction. Technically, he was a little late on the scene to be a real Beat, but he had the heart of one. I wasn't the first kid to read On The Road and have it stick with me for life. Finding an author who mashed up two of my great interests into one unique vision was a big deal.

Barry Gifford was born in 1946, just a couple years prior to Jack Kerouac's actual road trip that would be the basis of On the Road. Gifford's father was associated with the Chicago mob, and Gifford spent his early years living out of hotel rooms. Regular schooling wasn't in the game plan. "He learned from late-night noir movies and the strange characters that passed through the hotel lobbies," The Paris Review wrote. A stint in the merchant marine (Kerouac did time in the merchant marine, too) sent Gifford to swinging London in the mid-sixties, where he partied with the likes of John Lennon and Eric Clapton.

In 1967 Gifford moved to San Francisco and befriended the Beats who were still living there, including Allen Ginsburg. It was a momentous relocation. He was soon writing for Rolling Stone, and he met his future wife there. Many of the Beats he met provided their stories for Jack's Book. Novels, poetry collections, and more non-fiction followed. He even started Black Lizard Press, through which he published many of his favorite-though-forgotten pulp authors. I'll bet the first Jim Thompson book I ever read was a Black Lizard edition. Black Lizard was a big part of the neo noir boom of the 1980s. This noir comeback included films like the Coen Brothers Blood Simple and David Lynch's Blue Velvet.

When David Lynch asked Gifford to write the screenplay for Wild at Heart in 1990, based on the first of Gifford's Sailor and Lula neo-noir novels, Gifford initially refused. Gifford was busy writing the sequel to Wild at Heart (titled Sailor's Holiday) when Lynch called.  Lynch was fascinated by Sailor and Lula, who keep their love light alive in a dirty rotten world. "It was like looking into the Garden of Eden before things went bad," Lynch later wrote.

Gifford told Lynch to write the Wild at Heart screenplay himself, and then send it back to him for notes. They eventually shared credit for the screenplay. Wild at Heart was a success, winning the Palm d'Or at Cannes and planting its freak flag into the head of the '90s. It made Gifford's book a best seller. The Sailor and Lula series ended up running eight novels long.

The next time Lynch came calling, he wanted Gifford to adapt  one of the stories from Gifford's book Night People. Southern gothic meets the Lynchian edge of darkness in Night People. It might be for the wild at heart, but not for the feint of heart. It's also smartly hilarious.

Gifford didn't want to adapt one of the Night People stories, though. He wanted to create something new, featuring a character who wakes one day as a totally different person.  Lost Highway's non-linear structure makes it a more difficult film than Wild at Heart, and one viewing isn't enough. It's bizarre and unique, a perfect pairing of two one-of-a-kind storytellers. I don't think Lynch ever had a more perfectly attuned collaborator than Barry Gifford. 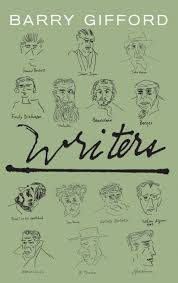 I recently finished Barry Gifford's Writers (2015), a collection of short one act plays that feature famous authors in vulnerable situations. I felt he really got to the heart of these scribes in a deceptively quick and fun read. You have to be good to say so much in a such a thin tome, and Gifford succeeds.  "The Last Words of Arthur Rimbaud," featuring the dying moments of the French poet, is haunting and sad. The same can be said about "The Nobody," about Emily Dickinson's relationship with her sister.

"Spring Training at the Finca Vigia" is a masterful portrayal of Ernest Hemingway and his wife, the writer Martha Gellhorn. Along for the ride are Hugh Casey and Kirby Higbe, real-life pitchers for the Brooklyn Dodgers. It's 1941, and the setting is the Hemingway household outside Havana, Cuba. Hemingway comes off as a moody knucklehead, having drunken sparring sessions with the jocks while the cool-headed Gellhorn delivers Martini-dry insults.

At night a hammered Hemingway shoots at imaginary Cuban rebels who he believes are trying to rob him. Gellhorn pleads with him to stop, but Hemingway goes so far as to booby trap his yard with explosives. It's both funny and scary, a combo Gifford specializes in. For me, this mirrored Hemingway's belief that the US government was spying on him. This paranoia is one of the things that's suspected to have driven Hemingway to suicide.  The kicker is that is was revealed that the FBI really was spying on Hemingway, even going so far as to read his mail. Hemingway was right all along. Gellhorn took her own life years after Hemingway did. The same with pitcher Hugh Casey.

Jack Kerouac meets infamous New York mobster Joey Gallo in "One Night in Umberto's Clam House." It's as literal a representation of the Beat-meeting-the-noir that Gifford could have written. Gifford's whole unique vision is kind of summed up in thirteen pages. It also feels like a moment in a Lynch film when there's a snatch of dialogue that's casual and dangerous, past and future, with darkness and murder tiptoeing all around a diminishing edge of light.

For more Barry Gifford, take a trip down that lost internet highway to BarryGifford.Net.

I discuss Gifford's The Devil Thumbs a Ride in my earlier two-part Sleuthsayers blog "My Dinner with Lawrence Tierney," from February 8 & 29. Tierney threw punches. Check it out.