by Lawrence Maddox
In 2016 many saw the passing of Proposition 64, which finally legalized the recreational use of marijuana, as the dawning of a new day in California. It seems like ancient history when Robert Mitchum saw jail time for toking a little Mary Jane in Laurel Canyon, but consider this: in 2003 Tommy Chong was sentenced to nine months in jail for selling bongs through his California company Nice Dreams. Prop 64 reflected how the Golden State had, at long last, mellowed out about getting high.
The full force of the new law didn't happen until last year, when legal sales for non-medical use were allowed. Licenses for dispensaries were granted. Everything was supposed to be chill for those in the bud business.

All that went up in smoke when the harsh reality of local, state and federal taxes hit legal dispensaries. According to a McClatchy article, between state and local taxes, weed could be taxed up to 45 percent. The IRS has gone after state-legal dispensaries for a tax rate of up to 70 percent. 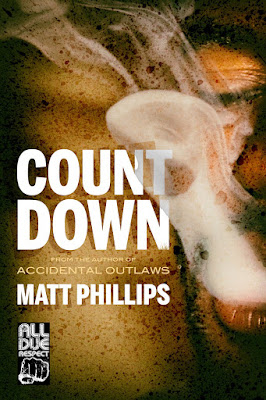 The result hasn't been the well-regulated pot industry Californians voted for. Instead, illegal underground marijuana dispensaries are everywhere in California.  According to the Los Angeles Times, more than 200 illegal marijuana businesses operate in Los Angeles alone. Illegal dispensaries are attractive because their untaxed kush is up to 50 percent cheaper than what you'd buy from a licensed dealer. What becomes of all that untaxed ill-gotten revenue?

Matt Phillips' Countdown (All Due Respect), a timely, gritty tale of weed and greed, is the first novel (Please correct me with other titles if I'm wrong!) of what I'll call Prop 64 Noir. It takes the plight of underground dispensaries with a lot of illegal cash-on-hand and chases it to a bloody and riveting conclusion.

Donny Zeus Echo and Abbicus Glanson are two ex-soldiers, tweaked by their violent combat experience in "Eye-Rack," trying to make their way in a seedy San Diego that has literally gone to pot. Jessie Jessup is a transplanted Texan who uses aquaponics –"that's right, fucking fish"–to grow some righteous weed. LaDon Charles is her unlicensed dispensary's muscle, providing street smarts and neighborhood connections.

With dispensary robberies on the rise and forced to keep their black market money from the prying eyes of the I.R.S. Jessie and LaDon turn to Abel Sendich, another vet. Abel runs a one-man security operation that stashes illegal cash under lock-and-key, safe from the I.R.S. and armed robbers. When Sendich and Glanson bond over their military background after a chance encounter, Sendich recruits Glanson to help him in his faux Fort Knox operation. Glanson has other plans, and his former "battle buddy" Echo is only too glad to help. When LaDon suspects that Glanson and Echo are targeting Jessie's shop, a suspenseful countdown to mayhem begins.

Though Countdown marches to its inexorably violent end, Phillips takes time with his characters. Jessie pursues a crush. LaDon plays a cat-and-mouse game with a pimp. Glanson agonizes over a physical trait that dooms his chances at romance. Echo, suffering from PTSD, unravels. You get to know Phillips' characters so well, you almost feel sorry for them when the bad things start to happen.

Phillip's San Diego isn't the sunny, upscale enclave it's often portrayed as. It's not the San Diego of Anchorman: The Legend of Ron Burgundy. It's a pit filled with mini-malls, dive bars, and shabby apartment complexes.  Iraq vets at loose ends roam strip joints, pimps run hookers. Marijuana is the drug of the moment, but heavy drinking is the order of the day. Like the weed and booze, the money is a means to one end: escape. Countdown is a sunny SoCal postcard in negative; an invitation to get out of the Golden State before the good times turn deadly.

Lawrence Maddox: Countdown is the first crime novel I've read that tackles the failure of Prop 64 to fully regulate California's marijuana dispensaries, which were licensed last year. I'm officially naming it Prop 64 Noir, and you may have invented it! How did you jump on this in such a timely way?

Matt Phillips: Prop 64 Noir-I freaking love it! It's about time somebody created a new genre. I agree with you that Prop 64 has failed in some ways. There's no doubt this legislation has failed when it comes to fair "regulation." Lot's of small growers are losing out to corporate folks.  And, yeah, that means growers and sellers are forced to stay in or resort to the black market. Another paradox is that now I can stroll into a dispensary and buy whatever I want.  Tell the truth: I kind of miss the mystery of texting a guy I slightly know to get in touch with a hookup he slightly knows for a dime bag of weed. I think they call that nostalgia.

Anyhow, I was interested in the money behind the herb. If these growers, sellers, etc, can't put it in a bank, what do they do with it? After speaking with some law enforcement folks I know, I had a pretty solid idea for a great story. That's how Countdown began for me.

Beyond that, right near where I live in San Diego–a pretty hip neighborhood–an illegal dispensary was raided and shuttered. That pretty much solidified the idea for me. I just ran with it.

LM: I highly recommend Pitts' 101 too. 101 depicts the weed biz before Prop 64, though.  Your book deals with the aftermath of 64. Countdown is about the illegal dispensaries, the need to hide the money, the tax burden that forces the sellers underground.

How much does your journalism background influence your crime fiction?

MP: The biggest way journalism has impacted my fiction is through dialog. There is no substitute for listening to people speak and trying to write it down as they say it. That helps a writer learn the shape of a person's speech. It means getting into rhythm and cadences and the musicality of speech. Dialog, to me, is about capturing language.

From a weed-perspective (Been waiting for that one!), I wrote a story for the food section in The Denver Post a few years back. I interviewed a chef who makes cannabis edibles. The whole idea was to treat cannabis like any other ingredient. We published a recipe and everything. Gave it the regular food writing treatment. The story got a lot of pushback from readers, but the editors defended it heartily and it got me interested in marijuana as something natural that–and I'm being blunt here–has a major impact on the power dynamics in our society.

Make no mistake, what we're seeing with marijuana now is still about power. Who will own this "thing" that everybody wants (and some people need)? Who gets the profits? Who calls the shots? And even worse:If we can't put a bunch of people in jail for using it, how the hell can we make money off it? That's pretty much the way things are, though I've purposely avoided the nuances here.

LM: San Diego used to be considered LA's sunnier, better-behaved sibling. You vividly depict it as a pit. What's going on with San Diego?

MP: Ha! Maybe I'm just trying to lower housing prices, right?  "San Diego is the absolute worst! Close your eyes if you see our tourism commercials on your TV! Stay in the midwest! DO NOT VISIT! Stand-up paddle boarding sucks. So does surfing. You do not want to catch a giant tuna! We do not have as many palm trees as you think! The beer is not great!"

Okay, fine. Truth be told, San Diego is exactly what you describe. More sun. More chill. More fun, for chrissakes. We've even got more beer. But like any American city, we've got our gutter punks and our hookers and our pimps and our drug addictions.

I'm writing noir, not a tourist commercial or a convention proposal. I need to find what's really out there...And pass it along to thee.

Important note: I love that I can "vividly depict" my home city as a pit. I'm sure those fine scholars who make selections for the National Book Awards are well-aware of my excessive accomplishments as a prose stylist.  I await their accolades!

LM: Do you think California will ever be able to regulate marijuana sales? There are around 200 illegal dispensaries in LA alone. I drive by many of them daily.

MP: Simple Answer–no. This is something I could grow in my house. And I could do it well. Marijuana is more than a product.  It's a cultural object that carries with it lore beyond what can be bottled by some shit-ass corporation. I remember a drifter I met while working at TGIFriday's. He worked with me about a week. Crappy busboy. But he had a tiny cedar box wrapped in a purple ribbon. He kept his weed inside with a small pipe. He talked about how it wasn't the high that drew him into weed, but the pleasure of its secrecy and subculture and "funny little conversations." Not exactly sure what he meant, but how do you regulate that?

Talking about those illegal dispensaries: The first thing that needs to happen is the federal government needs to remove its tweed sweater vest and put on a freaking t-shirt. Legalize it. It'll be like the craft beer industry. People flying to cities and taking weed tours.  It'll solve some money problems and it'll make life more simple. After that, I think cities and towns need to make sensical regulations about where and how a dispensary can operate.  The fees need to be akin to any other upstart business fees. Make sure every operation is up to health and quality standards and tax them based on revenue. I'm not an economist, but it seems like common sense is part of the answer here.

LM: What's next for Matt Philips?

I have a new noir novel slated with Fahrenheit 13, the rebels who published my noir novel Know Me from Smoke. The new one is called You Must Have a Death Wish and follows one of the characters I introduce in Countdown. No solid news on a publication date, but that's on the horizon. I've got a brutal PI novel written and I need to put on the finishing touches. That'll be a series (I think) and I have the second novel underway to about 20,000 words.

What else? A small town noir novella nearly finished for a super-secret project plus I'm banging away at a short story collection. And the day job, right? My production has slowed over the last year with some day job stuff, but I keep plugging away at my stories. Fingers crossed that people like them...

Matt Phillips is the author of numerous crime novels, including Accidental Outlaws and Know Me From Smoke.  I highly recommend Chris Rhatigan's interview of Matt Phillips at ADR Interview w/ Matt Phillips . For more Matt Phillips, check out MattPhillipsWriter.com.

As for me, I'm currently writing my sequel to Fast Bang Booze. On a related note, know of anyone in the LA area good at recovering lost data from busted hard drives? More to follow.