Man of Many Names and Faces

A person who is two-faced and has used an alias many times sounds sketchy. Why would I want to interview him and introduce him to SleuthSayer readers?

Let's call this fellow "Lenny." Born in New Bedford, Massachusetts, he left home at eighteen, spent some time in Miami, and then joined the U.S. Army. After completing his service, Lenny attended Michigan State University and earned a degree in Social Science. He wound up in a place he still loves--New York City.


In 1970, Lenny began working as a press agent for Solters and Sabinson, a show biz publicity agency near Times Square. Solters and Sabinson's clients included big-time names such as Frank Sinatra and The Beatles. At age thirty-five, Lenny made a giant leap by quitting his PR job and becoming a full-time writer without a "day job." During the following years, Lenny had eighty-three (you read that right--eighty-three!) novels released by major publishers--all under pen names.

Now in his eighties, the man of many names and faces refers to himself as "the crazy old dude."  In the past twelve months, this dude's published novels have increased to eighty-six, and many previous works are now available as e-books.

Throughout his career, Lenny was acclaimed under twenty-two pseudonyms as an excellent writer who takes his readers through adventures with such characters as cops, cowboys and soldiers. What's different about these three new books?

They're released under Lenny's real name.

The three new books released recently are: Cobra Woman, Web of Doom, and Grip of Death.  I reviewed Cobra Woman and Web of Doom on Amazon.  When I told Levinson I planned to read the re-release of The Last Buffoon next, he said that I might not like it because it's "raunchy, really raunchy." I replied that a review I'd found said, "The Last Buffoon" is the funniest thing I've ever read." Guess what Len Levinson book I'm now reading. 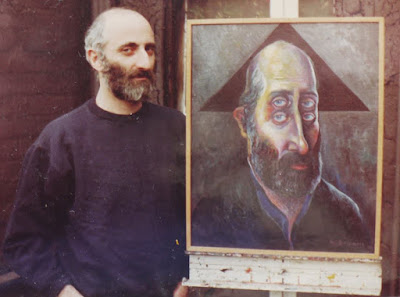 Photo of Len Levinson standing beside a portrait of himself
by Ari Roussimoff. Yes, Roussimoff  painted Levinson with
two sets of eyes. Levinson and Roussimoff were neighbors
in the Hell's Kitchen section of New York. To see more of
Roussimoff's work, check him out at roussimoff.com.

Researching Len Levinson, I learned a lot about him even before I began asking him questions.Some of the things he loves are evident.  In addition to people (he has grandchildren), it's obvious that Len Levinson loves New York City, art museums, beautiful women, and music. He's a familiar figure at blues festivals in the Chicago area--probably the only bopping dude in his eighties. 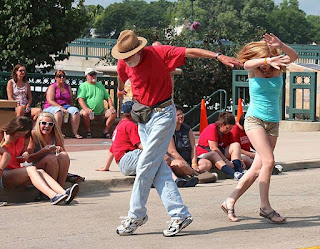