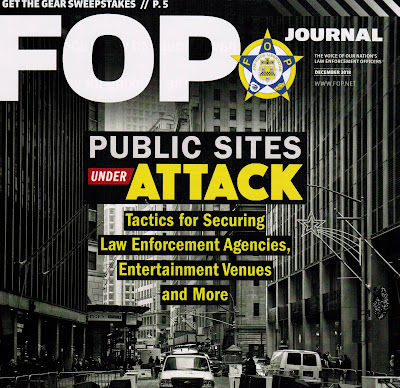 Interesting piece. Good stuff for a writer to know as it details changing police tactics and techniques to mitigate threats to the law enforcement officers and the public. Since nothing is off limits to terrorists, the vulnerability of people in public places is addressed as well as protection of police stations.

Obviously police officers must remain on alert to any threat. One way is ongoing training. When I was a university police officer, we trained repeatedly on how to handle emergencies on campus, from fire to natural disaster (we were in hurricane alley) to active shooter on campus. Every semester break, we conducted a mock attack on different buildings to keep our home-field advantage. We studied every area of campus.

The FOP article lays out how to locate vulnerabilities of hard and soft targets. It lists: 1. Perimeter security. 2. Officer positioning. 3. Controlling access. 4. Detection systems (such as video surveillance) and 5. Emergency planning. The informative article is concise.

Training is paramount. As is quick reaction. The men and women I worked with were fearless. In the few events we had on campus (all turned out to be false alarms – a student accused of pulling a gun on another actually pulled out a cell phone), the rapid response of our officers was impressive.

One observation by the trainers - old school cops like me and others, while we moved a little slower, were quicker to react decisively. Comes from working big city streets, I suppose.