Know When To Fold 'Em


by Steve Liskow
Successful poker players recognize when they don't have a winning hand and fold before they toss good money after bad. It's like the Old Kenny Rogers song. Eventually, you learn lessons that work the same way in writing. Some ideas are bad, and repeating them won't make them any better. 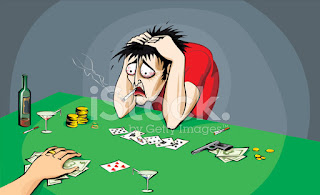 Last year, I participated in three author events that featured a cast the size of a Russian novel. Last March, my library brought 31 authors together, from all genres, and asked us to speak for five minutes each. That's two and a half hours of speakers for an event that would only last three hours.

Many of us cut our remarks short or didn't speak at all, but by the time everyone was through, most of the audience left. So did many of the authors. I sold two books and don't know if anyone else sold more than that. 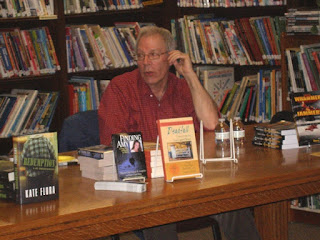 On a beautiful Saturday in June, the first perfect beach day of the season, I joined 18 other mystery writers at a Barnes & Noble. My experience is that if you put more than four writers in the same genre together, they cancel each other out.

To make things even worse, this store wanted us to speak for 15 minutes each (Math wasn't the manager's strong suit), and a demonstration against the current immigration policy took off a mile away at the same time we did. We outnumbered the patrons who came into the store, even with a Starbuck's downstairs.

The same results transpired with 15 writers at a local venue in December. We represented several genres, but how many people come to an event planning to buy 15 books? I talked to ten of the other writers (most of us left early), and nobody sold a book.

Was it Einstein who said insanity is running the same experiment over and over the same way and expecting to get different results? Whoever it was, he was right. 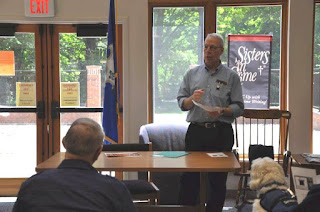 Last summer, another library where I'd been trying to get a workshop off the ground for four years invited me to participate in a local event. Pending further details, I said I was interested. The tentative date was April, which gave me time to order books, get a haircut, and iron a shirt, right?

Three weeks ago, the librarian sent the result of four months' planning. They wanted four mystery writers to present a panel (No topic mentioned) from 10:30 to 11:30. Three more panels would follow, and all authors could sell and sign books from 2:30 to 4:00. No refreshments, no activity while panels that people might not wish to attend, no further details.

I decided this was a losing hand and bailed out (See Einstein and Kenny Rogers).

Since November, two indie bookstores have opened within 15 miles of my condo. One offers a consignment split with local authors at 55%-45%, the worst deal I've ever seen. Writers pay a fee to get into the store's data base to sell those books, and the store will only take three copies of a book. Given that arrangement, I can't break even. But if they DON'T sell the three books, they don't refund my fee. As real estate magnate Hollis Norton said back in the 80's "It takes money to make money, but nobody said it had to be your money."

The other store requested an email through their site that included a book title, ISBN, synopsis, cover shot, my website, my social media, and a bio. I was tempted to include a blood sample, but couldn't attach it to the email. I don't want to do an author event, but I'd like to know the consignment split. I've sent them three emails over the last month.

They haven't responded yet. This looks like another bad hand.

I only sent a story to one market that didn't pay. They offered to promote my newest book, though. They published a black and white photo with no explanation on pulp paper (the dark cover became three blobs in shades of gray), formatted my story so the right margin looked like a seismograph, and asked me to get two reviews. The people I asked both gave the magazine a two-star review on Amazon and got hate mail in return.

Sayanora, Kid. Have a nice day.

Maybe I'm getting grumpy in my old age. Or maybe I've finally figured out that  I can use the time to write another scene or story. Or practice guitar. Or pet our cat. Or...
Posted by Steve Liskow at 00:01