Nancy Drew’s fan base loved women in peril. Encouraged by old man Stratemeyer, Mildred Wirt Benson (aka Carolyn Keene) wrote Nancy as an independent, impulsive, and headstrong 1930s girl. I'm not sure how this factors in, but when Edward Stratemeyer’s daughters took over in the 1960s, Harriet rewrote the first three dozen novels making Nancy less impetuous, less independent, and women-in-peril continued to attract readers. Why?

Evidence suggests we become more engaged and outraged when a pretty girl is killed. Outrage sells movies. It sells books. It stirs our emotions. Could The Virgin Suicides have been written about five brothers? 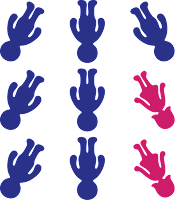 Besides violence toward women tearing at our hearts, we may take extra notice because, despite a plethora of movies and television shows to the contrary, female homicide victims are considerably less common. Of every nine people murdered, seven will be male. [2010] Perhaps it isn't fair to suggest Poe’s and Clark’s women-in-peril stories ramp up violence or actual homicide.

Edgar Allan Poe and Mary Higgins Clark apparently scored emotional bullseyes. They knew how to play upon our fears, male and female. Protectiveness of loved ones is hard-wired in male DNA. So often when one gender feels strongly about something, the opposite sex experiences the mirror image.

What if political, patriarchal, anger-against-women motives don’t drive the industry? Could something deeper be going on?

An explanation offered by psychologist Esther Perel, author of Mating in Captivity, offers spellbinding insight. She asserts the innermost mind is anything but politically correct. She articulates it in talks and texts better than I, but she says the secret pleasures that turn us on at night are the same we protest during the day.

Perel’s field centers upon our hidden, primitive, self-subversive psychology. When the lights go out, we change. We revert.

Biological components have been recognized since forever. Danger… fear… jeopardy fuel concupiscence. The underlying theory goes that great risk of life ignites a need to procreate, to ensure survival of the species.

Once in an agony column, a husband wrote in, worried about his wife. Immediately following a car accident, she wanted to rush home and make love– cuts and scrapes be damned. Had the accident damaged her mentally? Of course not. Faced with mortality, her survival instinct kicked into gear, a strong, healthy response.

Wars embody the most frightening fears. They’re irrational, society has gone mad, the rules have shattered. Death could arrive in an instant. Population figures show a leveling of growth when heading into a war, but once existence is somewhat assured, survivors mate— often. The term ‘Baby Boomers’ wasn’t idly selected.

My friend Crystal Mary, the staunchest feminist I know, loves slasher films, flicks I, God help me, can barely watch between my fingers. Her eyes brighten, her neck flushes, and she bounces home in an ebullient mood. Never for a second would she approve of violence toward women. What’s happening? Me, a diet of slasher movies would give me nightmares, but Crystal Mary’s able to connect with an uncomplicated, elemental part of her being. The premises of Mary Higgins Clark and Edgar Allan Poe she could understand.

What is your take? Could Clark and Poe have stumbled upon the secret that our fears drive the most rousing plots? Can you stomach blood-n-guts horror films better than Leigh? Are you able to serve as designated driver?
Posted by Leigh Lundin at 00:01