Lost in the Stacks for 41 Years

Gonna get a little off the main track here today.  I hope you forgive me.  You see, as of the first of September I am retired. I am going to tell you about some of my most memorable moments in forty-one years in the library mines.  Most have nothing to do with crime or writing.  So indulge me or go read something else.  I hear they have a lot of terrific stuff at MySpace.


When I was getting my Masters in Library Service degree the school urged us to call them as soon as we got our first jobs and tell them the salary.  So when I did I called them and gave them the big number: $10,300 a year.

"That's great," said the clerk.  "It will bring up the class average."

That first job was at a public library.   I was the government documents librarian but occasionally  I worked in the children's room.  I was at the desk there one day and two women walked in.  Obviously mother and grown daughter.  The mother marched up with a determined expression that said: I am going to get the answer if it takes all day.  Librarians love that look.

She fixed me with her steely gaze (why aren't gazes ever aluminumy?) and said "There's this book."

And that was clearly all she had.  No author, no title. Just a subject, a memory, and a burning desire to share it with her daughter.

I stood up.  "Follow me."  We marched to the Easy Readers.  I pulled out The Giving Tree, by Shel Silverstein. 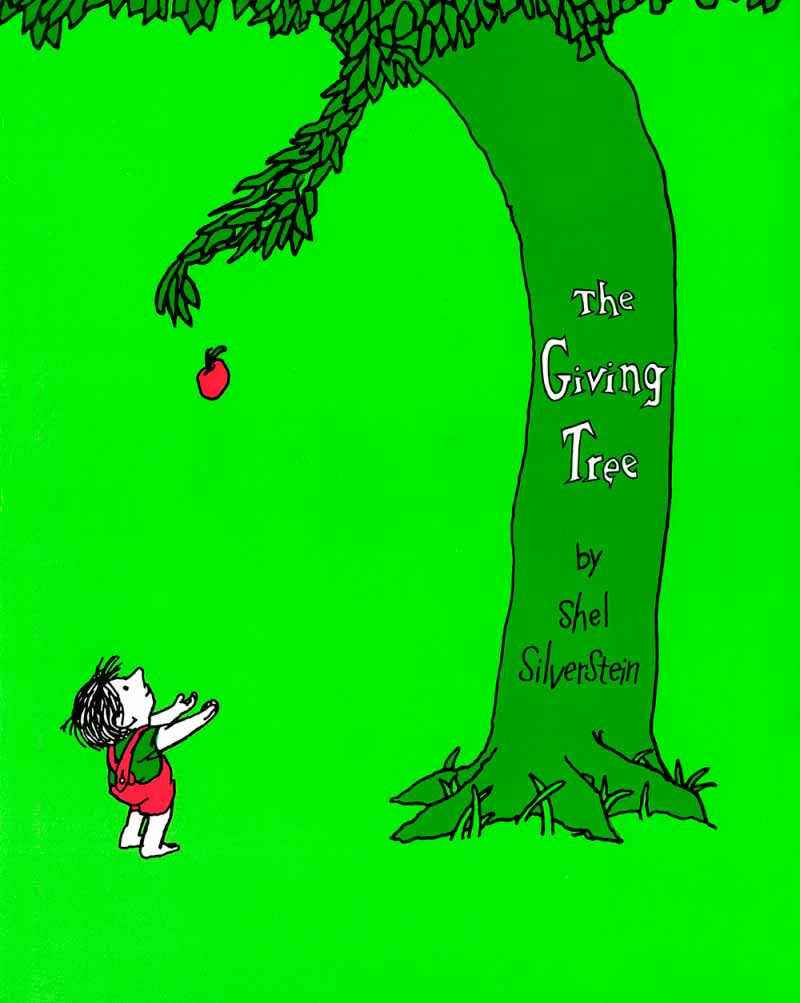 
My assistant was Sue.  Between us sat a file cabinet and by the time I left every drawer had been neatly labeled with a misspelling of my name she had clipped from an envelope received in the mail: Robert Lopreski, Roberta Lopresti, Robert LoPresti, Robert Loparesti...

When my first short story was published I brought the magazine in and plopped it down in front of her open to the right page and pointed to my name.  "That's by me." 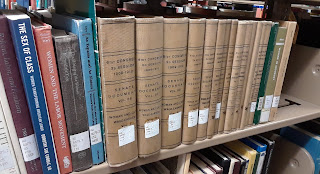 One day at the reference desk I got a phone call from a woman who wanted to know if we had The Power of Positive Thinking by Phyllis Schaeffer.

Now, a librarian is supposed to rely on sources.  If you ask me to spell cat I am supposed to check the dictionary.  But in this case I said "The Power of Positive Thinking  is by Norman Vincent Peale."

"No," she said with complete confidence.  "Phyllis Schaeffer."

So I checked the card catalog.  (Yup, that's what we had back then.)  Peale, yes.  Schaeffer, no.

Then the penny dropped.  The Power of the Positive Woman, by Phyllis Schlafly.  Well, the woman had been positive, all right.

One of the longest-running science fiction fan organizations in the country used to meet at that library.  They held a special event to celebrate an anniversary and I graciously volunteered to be the library's representative.  Possibly this was because the guest speaker was Isaac Asimov.

He was, naturally, great.  His subject was a recent editorial in the New York Times saying that setting up a system to watch out for asteroids was a waste of money because, as I recall, no huge meteor hit the earth for many thousands of years, and therefore another wouldn't hit for thousands more.  Follow that logic?

Asimov gleefully reported on past NYT editorials on science.  One was an announcement that rockets wouldn't work in outer space because there was a vacuum.

This library was the largest in our part of the county and when one of the small libraries had a reference question they couldn't answer they bounced it to us.  One of those smaller institutions had a director named Miss D.  Her main characteristic, as far as I could tell, was that she was terrified of the members of her library board.

One day she called up and asked for the government documents librarian.  It seemed one of her  board members was looking for some government statistics about drug abuse.

I wrote the questions down. "Some of these I can answer," I told her.  "Some of the data I don't think is available."

I did.  This was long before the Internet and I had to dig through a whole lot of books.  Finally, after several hours of toil I called her up.

"I was able to find most of your answers, but not all of them."

One day a patron (that's what librarians call customers, by the way) wanted to know what the phrase "the beast with two backs" meant.  I knew but I damn well wasn't going to tell her off the top of my head.  Fortunately Shakespeare's Bawdy by the brilliant Eric Partridge was at hand.

My next job was at a college library.  It was there that I found a report from the government of New Jersey that mentioned that the name of a small community in the southern part of the state, Mauricetown, was pronounced the same as a larger city in the northern half, Morristown.

Each librarian worked as a liaison for an academic department.  The acquisitions librarian told me there were several openings.  Naturally I chose English.  An hour later she was back with a file the size of a phone book.  "Read it and tell me if you still want the English Department."

Turned out two professors had come almost to the point of suing each other over an argument that involved the library.  One had written to the school paper complaining about the library and his colleague had written back, as I recall:  "Pay no attention to him.  We in the department have all had to hear him banging his spoon on his high chair before."  They eventually signed a joint statement agreeing that academic disagreements should be settled out of court.

I did take on the responsibilities for the English Department.  Didn't get sued.

One night a college student came up to the reference desk and asked: "Is Nicaragua in Europe?"  This was during the Reagan administration when it looked like we might be invading that country any day.

I think I kept a straight face.  "No, Nicaragua is in Central America."

It was my Sunday to work at the reference desk.  It was snowing like crazy.

I was thinking about the next day.  I was the head of the search committee and we had a candidate coming in for a job interview.  In fact she should be flying in around now.  I hoped that the driver sent to pick her up got to the airport on time.

Then I remembered who had been given the job of arranging her transport.  Uh oh.

Speaking of search committees, I once went to lunch with a candidate.  He asked who was paying for the meal.  When I told him it was the college he ordered the most expensive thing on the menu.

I told the search committee: "Don't offer him the job.  He won't take it."

They did.  He turned it down.  We lost the position.

One day the boss called me and another librarian into his office.  "I've been thinking about that meeting we had on Monday," he said.  "I want you two to run the project."  And then he spoke for several minutes about what he wanted, while we nodded solemnly.

Outside his office I turned to my colleague.  "Boy, I hope you were at that meeting on Monday, because I have no idea what he was talking about."

She said: "I was hoping you knew."

We went to the assistant boss who was outraged.  We soon got an apology for the confusion.  I never did find out what the project was about.

This was the time when computerized databases were first trickling into libraries.  One of the first we got (on a free-standing computer) was a list of all doctorate dissertations.  Another librarian, Barbara, and I both wanted to check out our father's PhDs.

"My father always insisted on people calling him 'doctor,'" I said.

Barbara is African-American.  "My father never cared whether people called him 'doctor' as long as they called him 'mister.'"

Which rather  put things in perspective.

Most computer databases were expensive and you paid by the search.  Therefore only librarians were allowed to do the searches.  I remember one student asking me to search PsycInfo for peer-reviewed research articles that tested the theory that mental illness was caused by demonic possession.

I didn't have much luck.

One day I was at the reference desk and the president of the college walked in.  I had never seen him in the library.  He looked around, spotted me at the desk, and walked over.

I sat up straight, ready for action.

"Do you have a waste basket?"  By gosh, I knew the answer to that one.

The first computerized databases (i.e. periodical indexes) we got came from a company called Silver Platter and were literally on shiny discs, larger than LP records.  One day I was showing them to a group of adults (i.e. not college students) who seemed quite awed by the new technology.

The database froze.  I knew what that meant; a static electricity build up.  I also knew how to fix it.

While they watched I opened the case, took out the disc (by the edges!) and shook it vigorously.

"Do you know why I am doing this?"  Head shakes.

The director of that library was Dr. Robert L. Goldberg.  He could be insanely frustrating but I learned more from him than any other boss.  For example, he told me approximately this:

"A good manager shares credit and hoards blame.  If the college president tells me he likes something in the library I always tell him who  did it, because it's important he doesn't think  this is a one-man operation.  But if he hates something and wants to know who is responsible, the only answer he gets is: me.  Because whoever did it, I am responsible."

And that was the first ten years of my career. Tune in on September 19th when we will cover the remaining thirty-one years.

In the mean time, please save your files as the computers turn off automatically.  Please bring material to the circulation desk to borrow.  Safe travels.
Posted by Robert Lopresti at 00:00