Welcome to my Universe

I recently read two books of the same subgenre which appeared within a month of each other.  Nothing odd about that, except the only other book I have ever encountered of that type I read decades ago.
Thekind  of book I am referring to a shared universe collection of mystery stories.  The concept of a shared universe is a group of authors writing about the same world with perhaps overlapping plots and characters.

To be clear I am not referring to:
* Authors co-writing a book (e.g. Ellery Queen)
* People merely writing new stories about an existing character (e.g. ten million post-Doyle Sherlock Holmes adventures.
* An author inheriting some earlier writer's franchise (e.g. Anne Hillerman).
* A single author writing a novel in stories, (e.g Art Taylor's On The Road With Del and Louise)
* A serial novel, in which each chapter is written by a different author (e.g Naked Came The Stranger, and several other books with titles starting with those first three words. Or The Floating Admiral, created by the Detection Club in 1931. By the way, Mark Twain hilariously described the writing of one of these in  Chapter 51 of Roughing It.)

No, I m referring to an author deliberately setting up a playground and inviting other authors to play in it by creating tales of their own.

Shared universes are pretty common in science fiction and in fantasy.  Charles L. Grant even created one in horror.  (Greystone Bay is a lovely New England village, but I wouldn't recommend it to tourists.) 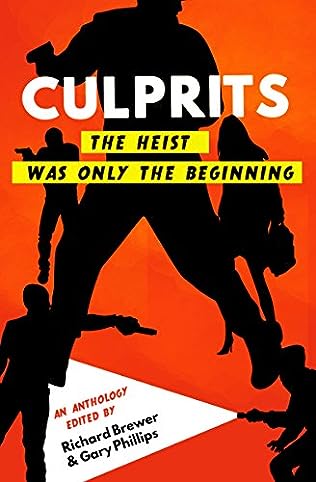 I read a mystery of this type back in the early eighties and if someone can remind me of the title and main author I would be grateful.   In the first story a private eye is hired to find six paintings that have been sold to different cities.  He subcontracts the job to different private eyes, and each story tells of a different hero's adventures in pursuit of the artwork.

And as I said at the beginning, that was the only example of the type I had read until this year, when Culprits appeared.  It was edited and conceived by Richard Brewer and Gary Phillips.  It's a caper novel and would appeal to fans of Richard Stark's Parker novels.

The first story, written by the two editors, describes the planning and the heist.  There is a double-cross (surprise!) and the old gang breaks up.  Then the remaining authors (Zoe Sharp, Gar Anthony Haywood, and David Corbett, to name a few) follow various members of the pack on their post-caper adventures.  Some tales are tightly connected to what you might call the main story line (hunting for the traitor) and some float free.

A week after Culprits was released Night of the Flood arrived.  The editors are E.A. Aymar and Sarah M. Chen.  This book takes place in the small fictional town of Everton, Pennsylvania.  A woman named Maggie Wilbourne is executed for murdering the men who raped her.  A group of women calling themselves the Daughters promised that if that happened they would blow up the dam, destroying the town.  The stories take place on the night they carry out their threat.

As in Culprits, some of the stories adhere to the main plot (the Daughters) and others have no connection except that they take place during the flood.  My favorite story in the book is an example of the latter.  In "The Curse," by Mark Edwards, a couple think they have been chased all the way from Britain by a demon who has attacked them with several plagues including, yup, a flood.

Both books are enjoyable, and bravo to everyone involved for trying something different.

Have you read any similar books?  Whatcha think?
Posted by Robert Lopresti at 00:00