by John Floyd
I haven't been to a writers' conference in a while, although I'm scheduled for at least three in the coming months. But I've been reading a lot of blogs and other posts by writer friends who have been attending conferences regularly. Besides making me want to go also, it's reminded me of things, good and bad and ugly, that have happened to me at conferences in the past.

Here are some that stand out in my memory:

- Ten or twelve years ago, at "Murder in the Magic City" in Birmingham, I wound up sitting beside author Harley Jane Kozak during a presentation. We chatted awhile, and even though I didn't recognize her name I said, "Don't I know you? You sure look familiar." Neither of us could figure out where our paths might've crossed before, and I couldn't help noticing--and being puzzled by--the amusement on her face. Only later did I realize why she had looked so familiar: she was an actress as well as a writer, and I'd watched her on TV the night before, in Arachnophobia.

- Highs and lows: At Bouchercon in Baltimore several years ago, two different ladies approached me after seeing my name tag and said they loved Angela Potts (one of my series characters). Music to my ears. Later at that same conference, a guy asked me if I was famous. I said, "No, sadly, I'm not." He said, "Can you point me to somebody who is?" 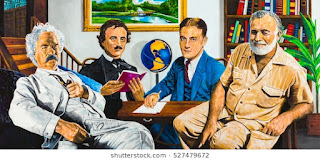 - Before my first and only trip to the Edgar ceremony in New York, the publisher of my books told me to try to get a photo of me with Stephen King, who was up for Best Novel that year. At the reception, I reminded my wife Carolyn of this, and she pointed to King and said, "Well, there he is--go talk to him." I gave her my cell phone to take the picture with, walked over to SK, and he was kind enough to chat with me for a minute or two. When I got back to our table I saw Carolyn looking at my phone and said, "Did you get it?" She looked up at me and said, "Get what? I was texting with Karen [our daughter]."

- When I spotted Otto Penzler in the midst of a huge crowd in the lobby of the conference hotel at the Raleigh Bouchercon I asked him, "Do you know everyone here?" He smiled and said, "No. But everyone here knows me." I loved that. And I bet he was right.

- I was once invited by author Steve Hamilton, who was a fellow IBM employee at the time, to a private screening of a short film adapted from one of his stories. The story was "A Shovel With My Name on It," and the resulting movie was retitled "The Shovel," and starred David Strathairn. That gathering remains one of my most enjoyable experiences at a writers' conference. This was at another "Murder in the Magic City"--Jan Burke and Steve were the guests of honor that year, and two of the kindest writers I've ever met.

- I think I mentioned this in a SleuthSayers post awhile back, but I happened to meet Lee Child at a Bouchercon in Cleveland not long after he had served as guest editor for Otto Penzler's annual Best American Mystery Stories anthology. That was one of the years when one of my stories' titles was mentioned in the appendix of the book, a story that made the top 50 but not the top 20. I remember babbling my thanks to Child for that mention of my story, even though the story itself didn't get included in the book. Only later did I learn that those top 50 are chosen by Otto, and then the guest editor picks the top 20 . . . so what I had done was thank Mr. Child for NOT choosing my story. (Sigh.) - At a Bouchercon several years ago I was crossing a hotel lobby when I was hailed by unnamed Editor #1, who informed me that they'd decided to publish one of my submitted stories. While I was thrilled to hear that news, I was a little worried too, because Editor #1 had held onto that story for a long time and hadn't responded to my inquiries about its status--so I had since given up and submitted it elsewhere, to unnamed Editor #2. After leaving Editor #1 (on one side of the lobby), I quickly searched out and reported to Editor #2 (on the other side of the lobby) that the story I'd submitted to their publication was now no longer available. Editor #2 accepted my apology and graciously agreed to withdraw that story from consideration, and all was well, but I went to bed that night resolving to never again send a story someplace before being absolutely certain that it was no longer being considered elsewhere. (Have I mentioned that this is a crazy business?)

- I attended a writers' conference four or five years ago that was held at one of he big casinos on the Gulf Coast. I had a good time and attended some educational and informative panels, but I must tell you, attendance at some of those sessions was sparse. That happens, when gambling and/or sun-and-sand are close by. I was reminded of the IBM banking conferences I attended in south Florida in the Good Old Days. I specialized in finance at IBM, so I went to a lot of those conventions, and anytime questions arose about a particular banker's absence from a particular session, the answer was always "He couldn't be here--he had to go study float management." In other words, he was outside at the pool. Another memory of conferences and conventions held in casino locations: my clothes always smelled like tobacco-smoke afterward.

- At one conference reception, I took what I thought was a sausage ball from a tray of hors d'oeuvres (in Mississippi we call them horse divers) and it turned out to be a piece of liver. I chomped down on it just as someone behind me, with a lady's voice, said, "Excuse me, aren't you John Floyd?" I am usually unknown to anyone outside the walls of our home, so I turned to say hello--at the very same moment that my taste buds sent a red-alert message to my brain that this was liver and not sausage. I remember gagging violently and squeezing my eyes shut, and when I finally opened them again whoever was behind me had disappeared/fled. To this day I hope she just chose to wander off before she saw my look of agony, but I doubt it. (Another sigh.) 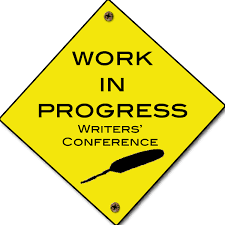 - One of the sessions I attended at a writers conference in Mobile a few years ago featured a young woman teaching writers how to set up their own websites. I wasn't really interested, but I sat down and started listening to her anyway. The following weekend, after getting back home, I used what I had learned to create my own site, from scratch, and it went live that Sunday night. I can't remember the name of the presenter, but I owe her a great debt. Sometimes those panel sessions and presentations pay off!

- At the top of my "bad" list is an experience my wife and I once had at a conference hotel: the alarm clock was set wrong and couldn't be changed, the closet-rods were mounted too low to allow normal clothes to hang properly (much less those as long as mine), the shower head couldn't be adjusted, the bedside radio turned itself on in the middle of the night and couldn't be reset (or unplugged), a shelf immediately above the sink was too large to allow us to bend over and spit after brushing our teeth, our view from the window was a brick wall ten feet away, every single light in the room was too dim, the peephole in the door was set at waist-height, etc., etc.--we counted almost two dozen aggravations and inconveniences. And most of these weren't things that were malfunctioning--they were just designed that way. A week earlier we'd been to one of my class reunions, where we had to stay at a Super 8 Motel (the only lodging in that town); its nightly rate was several hundred dollars less than this conference hotel, and it was ten times more guest-friendly. Just saying.

- At the top of my "good" list for conferences are meetings at the bar (or dinner or elsewhere) with some of my heroes, heroines, and online acquaintances. I won't list names here for fear of leaving someone out, but you know who you are. Seeing and talking with and getting to know other writers is, to me, by far the best reason to attend any of these conferences. Great memories!

And that's my pitch, for today. What are some of your highlights and horror-stories about conferences you've been to?

Inquiring attendees want to know…
Posted by John Floyd at 00:01