If not the most celebrated of noir private dick pictures, The Big Sleep is a pretty tall stick on the way there. Right from the get-go, you know what country you're in, the leads in silhouette, Bogart lighting Bacall's cigarette, behind the titles, the foreboding Max Steiner score. The mansion, the butler, Carmen with her up-from-under look, the general in the hothouse full of orchids, "nasty things, ...like the flesh of men." Not a lot of wasted motion. 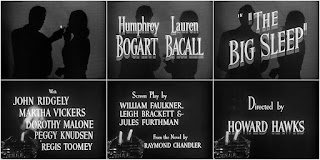 It was shot in 1945, right after To Have and Have Not, but Warners didn't release it until '46. In the meantime, they did some reshoots - the famous horse-racing exchange, for one - and Hawks re-cut the picture. The first edit actually makes more sense, and there isn't much difference in the run-times, but the finished product is paced so fast you never get a chance to catch your breath.

People complain the story's too hard to follow. Fair enough. Did the Sternwood chauffeur drive himself off the pier or was it staged? It's a dropped stitch, there's more than one, and nobody gets that worked up over it. Some of this is because of the Production Code. There was stuff they were never going to get away with. The biggest for instance is that Carmen can't have killed anybody, at least not and walk away, so they have to blame it on Eddie Mars. (In the book, Eddie lives to fight another day, and Marlowe even respects him on certain levels.) The book dealer, Geiger, sells pornography to a very select client list that he also blackmails, and the Lundgren kid is his boy-toy. That didn't make it into the picture. Big sister Vivian of course wants to help Carmen out of a jam, but she's not an accessory to murder. And so on. The problem being that if you subtract a key piece, the puzzle falls apart.

On the other hand, it mostly doesn't matter. The movie's all misdirection. It's character, and dialogue. How many pictures have so many amazing bits of business? The script is credited to William Faulkner, Leigh Brackett, and Jules Furthman, with an uncredited assist from Philip Epstein. More than a little comes straight out of Chandler. Can you beat it?

The cop, Bernie Ohls, describing Sean Regan: "The ex-legger Sternwood hired to do his drinking for him."

"You know what he'll do when he comes back? [Canino] Beat my teeth out, then kick me in the stomach for mumbling."

Hawks later said the picture proved something he'd already suspected, that with enough foreground razzle-dazzle, you didn't have to worry about narrative logic. "I never figured out what was going on," he told an interviewer, and at the end of the day, nobody else could, either.

Bacall gets the last word, right before the fade-out, after Bogart hangs up on the cops.
"You've forgotten one thing," she says. "Me."
He looks at her. "What's wrong with you?" he asks.
"Nothing you can't fix," she tells him.
Posted by David Edgerley Gates at 00:00

Great movie. My wife and I try to watch it during the first rain of the year. Of course, living in SoCal we haven't seen it much lately...

And even Chandler couldn't figure out who killed the chauffeur. But that doesn't detract from the movie.

I'm a big fan, too. It's not just character and dialogue, but also beautiful black and white cinematography. Who cares if it doesn't make total sense.

I'm not anything like a film buff, but I can't even count how many times I've watched this one just for the joy of getting lost in it. The book is a brilliant demonstration of how to write great stuff, too.

Thanks for sharing this, David.

I also enjoyed your short story ("I Pray the Lord my Soul to Take") in AHMM, July/August 2018 issue. Excellent characters and pacing.

Janice - THE BIG SLEEP was shot by Sid Hickox, who isn't as big a name as John Alton, say, but he gave that look to a lot of Warners pictures. He'd worked with Hawks the year before on TO HAVE AND HAVE NOT, he shot DARK PASSAGE, and he did a number of pictures with Raoul Walsh, including WHITE HEAT. https://www.imdb.com/name/nm0005741/?ref_=ttfc_fc_cr5