Suicide Blonde: Or, Another Day, Another Announcement


As I laid it out in this post at the beginning of last month, 2017 ended well for me, writing-wise, and 2018 has shown no signs of letting up in terms of good news to report.

So let me just get this out of the way.

As I alluded in my post linked above, when I came up with the idea for a fiction anthology inspired by the music of Steely Dan, I was already in discussions with Eric Campbell at Down & Out Books to publish a novella I'd expanded from a short story I wrote and sold to Alfred Hitchcock's Mystery Magazine a decade ago.

Well, he bought it. 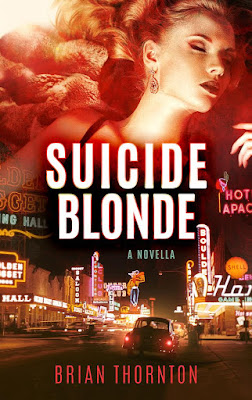 Eric liked the novella so much, that he asked me to either expand it into a full-length novel, or turn it into a series and add more pieces featuring my protagonist: a mob lawyer working for an unnamed criminal syndicate in 1962 Las Vegas.

So I'm expanding the content to three novellas, with Suicide Blonde, the one I initially pitched, serving as both the cover and lead-off story of the collection. The other two novellas will include Murphy (the lawyer), and other characters introduced in Suicide Blonde, but I am playing around with the notion of switching up the point-of-view. For example, Murphy narrates Suicide Blonde, but the bent cop Murphy occasionally works with will narrate the second one, and Murphy's new girlfriend, a been-around-the-world-and-back-again showgirl will serve as narrator for the final one.

It promises to be a challenge, and I am still working out the kinks, but either way, it's a new approach, and a risk I am excited to take.

But hey, who knows? I might chuck the idea, and just go with Murphy as narrator for all three novellas. After all, it took a lot of work to develop the character, and nail down his voice to get it exactly where I wanted it.

When I was working on the original draft of the story, I had yet to sell anything that was first person. I am a big fan of the writing of Ross MacDonald, and especially love the voice he was able to develop for his protagonist, Lew Archer, over the eighteen novels he wrote featuring the detective.

So in some ways, Murphy is an homage to MacDonald and his work. In one other important way, he's an homage to crime fiction author extraordinaire Sean Doolittle, who gave me much-needed feedback on my initial draft of the original story. I was very appreciative, and so I named my protagonist after him: "Sean Murphy."

So there it is. There's my second big announcement of 2018, and it's only February! At this rate, there'll be more to come before we flip the calendar to 2019. Stay tuned!

And speaking of 2019, look for Suicide Blonde to drop next September!

Posted by DoolinDalton at 01:10