In 1986, I read the first V I Warshawski private eye book, Indemnity Only. I also was writing a female P.I. novel when I learned women mystery writers at Bouchercon were meeting and forming a group called Sisters In Crime. One major objective of SinC was to raise publishing and public awareness of women mystery writers. This organization was the brainchild of V I Warshawski’s author, Sara Paretsky.

In 1988, I attended my first Edgars and Bouchercon. I quickly learned Sara was passionate about women writers getting a fair shake.

In 1990, my husband and I opened a mystery bookstore in Austin. Three years later, we hosted a mystery convention, Southwest Mystery Con. A small group of Austin mystery women formed a chapter we named Heart of Texas Sisters in Crime. Through that, Sara and I became friends. I’m proud our H•O•T chapter of SinC still meets monthly. I’m proud that Sara still fights for women mystery writers. And I’m honored to introduce Sara as today’s guest writer.

Sara Paretsky and her acclaimed P I, V I Warshawski, transformed the role of women in contemporary crime fiction, beginning with the publication of her first novel, Indemnity Only, in 1982. Sisters-in-Crime, the advocacy organization she founded in 1986, has helped a new generation of crime writers and fighters to thrive.

Among other awards, Paretsky holds the Cartier Diamond Dagger, MWA's Grand Master, and Ms. Magazine's Woman of the Year. Her PhD dissertation on 19th-Century US Intellectual History was recently published by the University of Chicago Press. Her most recent novel is Fallout, Harper-Collins 2017. Visit her at SaraParetsky.com

Why I Write
by Sara Paretsky

Years ago, when I was in my twenties, I heard an interview with the composer Aaron Copland. The interviewer asked why it had been over a decade since Copland's last completed composition. I thought the question was insensitive but Copland's answer frightened me: "Songs stopped coming to me," he said.

I wasn't a published writer at the time, but I was a lifelong writer of stories and poems. These were a private exploration of an interior landscape. My earliest memories include the stories that came to me when I was a small child. The thought that these might stop ("as if someone turned off a faucet," Copland also said) seems as terrifying to me today as it did all fifty years back.

I write because stories come to me. I love language, I love playing with words and rewriting and reworking, trying to polish, trying to explore new narrative strategies, but I write stories, not words. Many times the stories I tell in my head aren't things I ever actually put onto a page. Instead, I'm rehearsing dramas that help me understand myself, why I act the way I do, whether it's even possible for me to do things differently. Where some people turn to abstract philosophy or religion to answer such questions, for me it's narrative, it's fiction, that helps sort out moral or personal issues.

At night, I often tell myself a bedtime story- not a good activity for a chronic insomniac, by the way: the emotions become too intense for rest. When I was a child and an adolescent, the bedtime stories were versions of my wishes. They usually depicted safe and magical places. I was never a hero in my adventures; I was someone escaping into safety.

As a young adult, I imagined myself as a published writer. For many years, the story I told myself was of becoming a writer. Over a period of eight years, that imagined scenario slowly made me strong enough to try to write for publication. After V I Warshawski came into my life, my private narratives changed again. I don't lie in bed thinking about V I; I'm imagining other kinds of drama, but these often form the subtext of the V I narratives.

I'm always running three or four storylines: the private ones, and the ones I'm trying to turn into novels. I need both kinds going side by side to keep me writing. 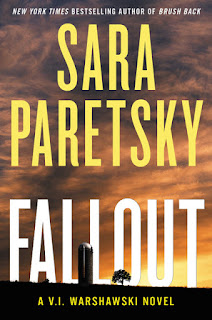 Storylines are suggested by many things- people I meet, books I'm reading, news stories I'm following- but the stories themselves come from a place whose location I don't really know. I imagine it as an aquifer, some inky underground reservoir that feeds writers and painters and musicians and anyone else doing creative work. It's a lake so deep that no one who drinks from it, not even Shakespeare, not Mozart or Archimedes, ever gets to the bottom.

There have been times when, in Copland's phrase, the faucet's been turned off; my entry to the aquifer has been shut down. No stories arrive and I panic, wondering if this is it, the last story I'll ever get, as Copland found himself with the last song. If that ever happens permanently, I don't know what I'll do.

So far, each time, the spigot has miraculously been turned on again; the stories come back, I start writing once more. Each time it happens, though, I return to work with an awareness that I've been given a gift that can vanish like a lake in a drought.
Posted by mystery guest at 00:00