Michael Bracken's earlier post about his first published story inspired me to go back to my first stories.

My first story to see print was "The Sad Mermaid," a fantasy published in ELLIPSIS, student magazine of the University of New Orleans. Wasn't a sale. No payment. January, 1976. Another beginning writer had her first story printed in that issue of ELLIPSIS - fellow New Orleans mystery writer Tony Fennelly. In 1996, I made a little money on the story when it was published in TALE SPINNER Magazine, Issue 4.

Years of rejections of short stories followed. multi-genre failures. Decided to write a novel and finished GRIM REAPER (1988 Zebra Books). When it sold, I remember telling my father who asked, "They're paying you American money?"

Soon after, I met George Alec Effinger who was living quietly in the French Quarter. He took a look at my short stories and suggested I use the main character from my novel in stories. 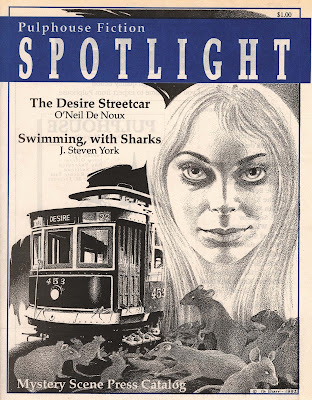 First LaStanza story sold quickly -"The Desire Streetcar" Pulphouse Fiction Spotlight Magazine, Issue 2, July 1992. Other sales followed. "The Man with Moon Hands" to New Mystery Magazine, Issue 3, December 1992 and the BIG ONE - a sale to Ellery Queen Mystery Magazine, Vol 101, #5, April 1993. Interesting note, this was a LaStanza story and like the novels, it had a profanity in dialogue. Editor Janet Hutchings missed it when she accepted the story and sent me a nice note asking if I could change one word in the story. Are you kidding? Hell, yes. I'm not a poet. I'm a writer. I'm not in love with words, they are only tools, so I switched to another tool. I'm proud of the story "Why" primarily because it dealt with a different kind of homicide we handled - suicide.

Which brings me to an important point. Listen to the editors of professional magazines, especially when they suggest a re-write. When editor Gardner Dozois at Asimov's suggested I re-work my story "Tyrannous and Strong," I resisted, then looked closely at his suggestions and rewrote the story, which appeared in Asimov's Science Fiction Magazine, Vol. 24, No. 2, February 2000. The story has been published five times, including magazines in Greece and Portugal.

In the 42 years since "The Sad Mermaid" saw print, I've had over 400 short story sales and received several thousand rejections as well as a SHAMUS AWARD for Best Private Eye Short Story and a DERRINGER AWARD for Best Novelette and other awards. 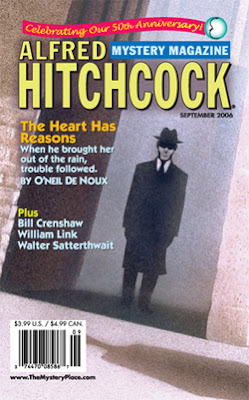 A highlight came with the January 1995 Issue of AMERICAN WAY: IN-FLIGHT MAGAZINE OF AMERICAN AIRLINES. Two pieces of fiction in the magazine. One of my stories and a short story by one of my literary icons - Ray Bradbury. The stories ran back to back in the 138-page slick magazine given free to American Airlines passengers that month. Ray Bradbury and I together.

When I was fifteen and dreaming of becoming a writer as I read THE MARTIAN CHRONICLES and THE GOLDEN APPLES OF THE SUN, I never dreamed I'd have a story in the same magazine with this man.

Now - If we can only answer the ultimate noir movie question - Why did Dick Powell keep get knocked out in movies?


That's all I got today -
www.oneildenoux.com