My first two mysteries appeared in Gentleman’s Companion (“City Desk,” January 1983; “Adam’s Rib,” March 1983) and my third appeared in Mike Shayne that same year. “Vengeance to Show in the Third” (October 1983)—the story of an ex-jockey, a girlfriend who isn’t who she appears to be, and race fixing—was clearly influenced by reading Dick Francis. Just like my initial sale to Espionage, I targeted the men’s magazines first and, after rejections from Hustler, Gallery, Stag, and Cavalier, I stripped out 500 words of graphic sex and submitted the story to Mike Shayne on March 8, 1983. A postcard from editor Charles E. Fritch dated July 10 notified me of my first Mike Shayne acceptance.

I described the genesis of “With Extreme Prejudice” (August 1984), my second appearance in the magazine, in “You Only Live Twice,” when I explored by brief foray into writing spy fiction.

The story of an insurance investigator who steals from the company’s clients, “A Matter of Policy,” my third appearance in Mike Shayne (February 1985), was also first submitted to several men’s magazine. After rejections from Hustler, Playboy, Gem, Buf, Cavalier, Gallery, and Swank, I stripped out 600 words of graphic sex and saw the new version rejected by The Saint Magazine and Alfred Hitchcock’s Mystery Magazine before acceptance by Mike Shayne on November 11, 1984. Unlike the postcards I received for the first two acceptances, this one came typed at the bottom of a rejection for another story. (The rejected story, “All My Yesterdays,” finally saw publication in Suddenly V [Stone River Press, 2003] and, in 2004, earned a Derringer Award for Best Flash.)

My final appearance in Mike Shayne—“The Great Little Train Robbery” (June 1985), the story of a gang preparing for a train robbery—is the first story the magazine published that did not start life intended for a men’s magazine. AHMM, Spiderweb, and EQMM all passed on the story before Mike Shayne accepted it February 13, 1985, and “The Great Little Train Robbery” has become one of my most-often reprinted short stories: Detective Mystery Stories, September 2002; Sniplits, April 2008; and Kings River Life (as “The Great Train Robbery”), August 19, 2017. 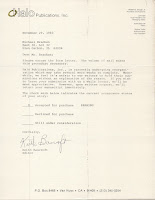 (Though The Saint Magazine never published my work, it also accepted one of my stories prior to its demise, and “Sharing” did not see publication until the July 2001 Judas_ezine. That means each of the three mystery magazines that died in the mid-1980s died clinging to one of my stories. Maybe it’s a good thing for us all that neither AHMM nor EQMM began accepting my work until well into the twenty-first century.)

“Unfortunately,” notes James Reasoner, frequent contributor and ghostwriter of many of the magazine’s Mike Shayne stories, Mike Shayne Mystery Magazine “had a habit of not paying their writers unless they were badgered and threatened into it.”

Apparently, I never mastered the art of badgering and threatening because Mike Shayne Mystery Magazine stiffed me. I was never paid for the four stories they published.

Unfortunately, they aren’t the last publication to go belly up owing me money.


Of more recent vintage: “Texas Hot Flash” appears in Tough and “Skirts” appears in Black Cat Mystery Magazine #2. “Smoked,” which first appeared in Noir at the Salad Bar, has been selected for inclusion in this year’s The Best American Mystery Stories.