by Art Taylor
After I wrote the headline above, I realized that it might suggest something more sinister—that I'm planning some sort of criminal activity of my own.
...which I'm not.

(...or at least I'm smart enough not to write about it publicly if I was.)

What I am planning is the syllabus for my "True Crime" course this spring at George Mason University. 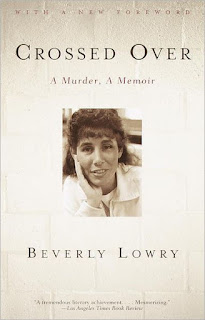 I've taught this course before a few years ago, and it was enlightening to me as well, though I'd actually included several of the books before in other classes not specifically dedicated to this topic: Truman Capote's In Cold Blood and Beverly Lowry's Crossed Over: A Murder, A Memoir, which focuses on Karla Faye Tucker, the pickax murderer, who became the first woman executed in the state of Texas since the mid-1800s. That latter book remains one of my own favorites—such a rich mix or reportage and reflection, of a writer grappling with issues in the wider world (the impact of place on a person, for example, or the workings of the justice system) at the same time she's struggling with more personal issues, about parenting particularly, what it means to be a parent, those roles and responsibilities and the weight of it all. (As a parent now myself, I think about the book in different ways myself, with greater weight.) I'd also included Errol Morris's documentary The Thin Blue Line, which continues to astound me each and every time I've watched it.

Much of the reading that was new that first time I taught "True Crime" came from the Library of America's True Crime: An American Anthology—some well-known essays that covered a wider history and also a wider breadth of approaches, from the more strictly journalistic (Meyer Berger's Pulitzer Prize-winning article "Veteran Kills 12 in Mad Rampage on Camden Street") to works that bordered very close to fiction (Jim Thompson's "Ditch of Doom").

The course requires students both to craft analytical essays and try their hand at their own  creative writing—or at least the opportunity to do the latter. The first assignment asks students to choose a crime that's been covered in the class and to research other documents related to it—additional newspaper coverage from the same era as well as (potentially) more recent essays looking back on the crime—and to compare the approach in each, to evaluate which approaches might help reveal more about the "truth" of the crime. The creative writing assignment allows students to craft their own true crime essays, whether as memoir (amazing how many of us have been at least adjacent to crimes if not involved more intricately in them) or as investigative journalism at least at some rudimentary level.

There are several new texts I'm considering for the course—some I know better than others. 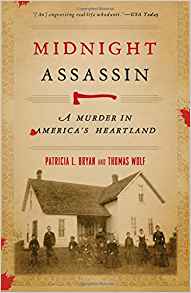 I had the great opportunity this summer to meet Thomas Wolfe, the co-author of Midnight Assassin: Murder in America's Heartland, which explores a crime that I've taught many times in the past: The Hossack Murder, in which an Iowa farmer was killed in the middle of the night by his wife. The story was covered in the press by Susan Glaspell, who went on to write both a well-known play, Trifles, and a short story, "A Jury of Her Peers," both based on the crime. Those three sets of documents all by the same author—newspaper reporting, a play, a short story—have always made for good texts to analyze: how they compare with one another, how the story is transmuted from fact into fiction, how themes persist one to another. And I'm looking forward to the opportunity of teaching Midnight Assassin itself—which puts all this into even greater perspective, looking back on it all from the vantage point of today (or 2005, I mean)—and to having Wolf himself visit the class.

I was just recently reading several reviews of a new YA book, The 57 Bus by Dashka Slater, and I think it would be fascinating to teach, both because of the very contemporary themes explored here and because of the opportunity to explore the differences in writing true crime for young adults and for adults—that shift in audience. Here's the review from the Washington Post that first alerted me to the book: 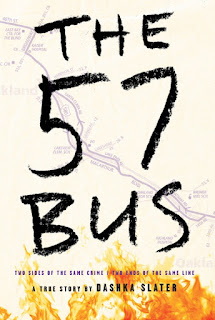 On the afternoon of Nov. 4, 2013, a 16-year-old boy in Oakland, Calif., set fire to another teenager’s thin white skirt. The victim received second- and third-degree burns and spent the next few weeks undergoing multiple surgeries. In The 57 Bus (Farrar Straus Giroux, ages 12 to 18), Dashka Slater examines this horrific incident from several angles, providing a nuanced portrait of the assailant and the victim, a brainy teen who identifies as agender (neither male or female). The book also sensitively explores the hot-button issues of gender nonconformity, bias crimes and juvenile justice. And since the attack occurred at one point along the sprawling route of the 57 bus, the city of Oakland — a diverse community beset by inequalities in income, opportunity and safety — also figures heavily in the narrative. For kids in East Oakland, “life had a way of sticking its foot out, sending you sprawling,” and Slater well describes the bleak and bleaker prospects they face.


Mason is fortunate to have a true crime writer visiting at the end of next semester: Cutter Wood, author of Love and Death in the Sunshine State: The Story of a Crime, which promises to be a potent mix of investigation and introspection (see Crossed Over above again for the works I'm drawn toward). Here's the promotional copy for the book: 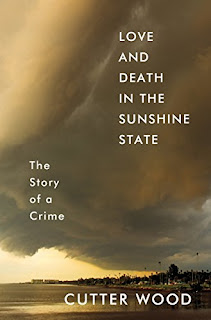 When a stolen car is recovered on the Gulf Coast of Florida, it sets off a search for a missing woman, local motel owner Sabine Musil-Buehler. Three men are named persons of interest—her husband, her boyfriend, and the man who stole the car—and the residents of Anna Maria Island, with few facts to fuel their speculation, begin to fear the worst. Then, with the days passing quickly, her motel is set on fire, her boyfriend flees the county, and detectives begin digging on the beach.

Cutter Wood was a guest at Musil-Buehler’s motel as the search for the missing woman gained momentum, and he found himself drawn steadily deeper into the case. Driven by his own need to understand how a relationship could spin to pieces in such a fatal fashion, he began to meet with the eccentric inhabitants of Anna Maria Island, with the earnest but stymied detectives, and with the affable man soon presumed to be her murderer. But there is only so much that interviews and records can reveal; in trying to understand why we hurt those we love, this book, like Truman Capote’s classic In Cold Blood, tells a story that exists outside of documentary evidence. Wood carries the investigation beyond the facts of the case and into his own life, crafting a tale of misguided love, writerly naiveté, and the dark and often humorous conflicts at the heart of every relationship.


Sounds good? Only trouble is that Love and Death in the Sunshine State doesn't come out until the very end of the semester, so getting it on the syllabus will be a challenge. We'll see what I can do! 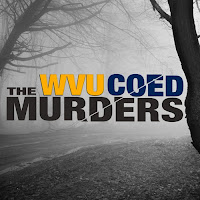 And finally, another addition—and a switch in media too—with the podcast series Mared & Karen: The WVU Coed Murders, and I'm hoping to get the man behind the podcast to visit my class as well next semester. As the WV Explorer explains, the podcast "explores the kidnapping, murder, and decapitation of two West Virginia University freshmen in 1970" and "presents the case for a wrongful conviction, offers new evidence about who really killed the coeds, and examines the crime’s social and cultural impacts on West Virginia and Appalachia." This one is a definite, and thanks to English Department chair Debra Lattanzi Shutika both for suggesting the podcast and (in advance!) for helping to set up my guest lecturer too!

Any other suggestions for texts I should consider? I'm still finalizing my plans!