Walking into a pawn shop in the middle of a robbery can be a hazardous experience, especially if the robber is a relative amateur in these types of situations. That's the circumstances that Yarnell, a professional burglar, finds himself in when he goes to redeem his wife's diamond wedding ring from the shop. Fortunately for him, his wife doesn't know that her ring has been hocked, and he intends to keep it that way.

Anyway, it's hands up, hands down, hands up, then hands down again for Yarnell as he converses with the robber. And just when Yarnell and the robber come to some sort of  understanding about proper procedure, in walks Beaumont, Yarnell's partner in crime, who has his own thoughts about robbery etiquette.

Meanwhile, behind the counter in the back of the pawn shop, the recipient of the robbery, Lebanese George, who is also the owner of the pawn shop, has developed a case of tired arm muscles. So now, one of his hands has slowly declined to a half-raised position while he slurps coffee out of a mug held by his other hand.

The robber soon decides he wants everybody's money, in which case Yarnell tries to hand his money to Lebanese George first in order to pay off the hock on his wife's wedding ring. George, knowing he is going to lose the money anyway, refuses to accept the cash as payment to redeem the ring. That's when Yarnell learns his wife's ring is already part of the jewelry the robber is stealing. Thus, the robbery progresses. Up to a point. 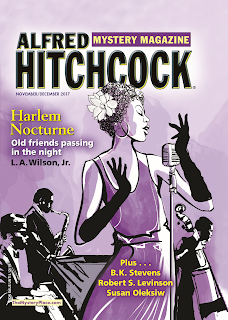 "Black Friday" is the tenth story in my Holiday Burglars series, all ten of which have been published in Alfred Hitchcock Mystery Magazine. Short story critic Rob Lopresti has remarked that this one is the funniest story of mine that he has read to date. Who am I to argue with such a great mind?

This is Lebanese George's second appearance in one of my stories.His debut as a story character was in my Twin Brothers Bail Bond series as a crooked wine merchant. In real life, the model for "Lebanese George" was a man who sold used cars with my Uncle Dick. Stories of some of their escapades were truly scam jobs on the general car buying public and hilarious situations in the telling. In his middle years, George had to go on the run from the Dixie Mafia and did his hiding out on a houseboat which traveled up and down the river as a means of frequently changing his address. I only met George once, and that was during his later years. At that time, he claimed to own a steak house in the city we were visiting. He did invite my wife and I to his restaurant for a free steak dinner, but we never made it to his establishment. I always wondered what that free steak dinner would've cost me.

George was a likable and very entertaining individual, which probably made him successful at whatever he did. With all that in mind, I'd say if he's still alive and you happen to meet up with him, keep one hand on your wallet and be sure it stays in your pocket. You can count your money before and after, but please don't count it in front of him.