Capstone to a Career


by Art Taylor
Last week's Bouchercon in Toronto was terrific and memorable in so many ways, with one of the great highpoints coming on the final day, when our fellow SleuthSayers B.K. Stevens won the Anthony Award for Best Novella for her outstanding story "The Last Blue Glass."
As most folks in our community know, Bonnie passed away suddenly back in August, but her husband Dennis and their daughter Rachel were in Toronto for much of Bouchercon to represent her as an Anthony finalist—attending several short story panels and being part of the weekend generally.

In addition to sitting near them at the panel for Anthony Award finalists in the novella category, I was fortunate to join Dennis and Rachel along with author Debra Goldstein, Linda Landrigan of Alfred Hitchcock's Mystery Magazine (Bonnie's longtime publisher), and Linda's husband John for dinner on Saturday night—a chance to get together with friends (part of a group that had gathered at several other conferences in recent years) but also, of course, an opportunity to remember Bonnie and her work. Dennis and Rachel shared some stories from years past, the early years of Dennis' and Bonnie's marriage, theirs moves from school to school and state to state, the years of raising kids—those stories from two perspectives, of course, with Rachel looking back on her own childhood. Many stories, of course, but one image that stood out related to Bonnie's commitment to her craft: her writing days when husband and kids were elsewhere so as to give her time and space, her family committing themselves in support of her work. 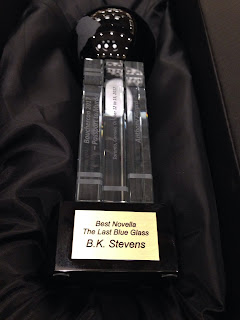 On Sunday, we gathered together again at the awards brunch, sat together along with Roberta Rogow, Deborah Buchanan, Michael Bracken and his wife Temple, and then Alan Orloff who arrived in time for the official presentation. Before the awards were presented, Roberta told us that she had always been good luck at awards ceremonies—that people at her table always won. Whatever role Roberta's luck played, we all erupted in cheers when Bonnie's name was called—and fought tears too when Dennis stepped up to the podium to explain what had happened to Bonnie, to talk about her long hopes of winning such an award, and to thank people in the mystery community for their support—those connections that he said meant so much to her, those friendships with her that meant so much to us. I say "fought tears" but that fight wasn't entirely won, as you might imagine.

Bittersweet is the word that kept coming up time and again at the brunch and again in the days since then. Poignant is the word that Dennis himself used, and it's difficult not to feel great sadness that Bonnie wasn't there to accept the honor herself, to enjoy the moment.

The Anthony Award is surely a fine capstone to Bonnie's terrific career as a short story writer, novelist, essayist, and more—but here's wishing again that it had simply been the next step in a career still being built, with more of her writings still ahead.

Congratulations to our fellow SleuthSayer and our too-soon-departed friend, B.K. Stevens.
Posted by Art Taylor at 00:00