by David Edgerley Gates
French actress Danielle Darrieux died this past week. She was 100, her career beginning in 1931 and lasting until 2016. Her death notices all remark the fact that she stayed on in Paris after WWII broke out, and kept making pictures during the German occupation. Some of the obits go so far as to call her a Nazi collaborator. I'm guessing the story admits of rather a few more complications. 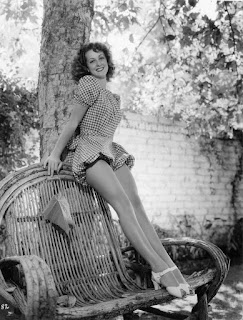 Let's begin with the fiction that French resistance to the Germans was fierce and widespread. Don't kid yourself. This was a wartime convenience, for Allied propaganda, and for French domestic political purposes after the war. De Gaulle insisted on it. It lifts us on angels' wings above the black market of hypocrisy, corruption, and grievance that characterized the Occupation. The pre-war climate in France echoed the America First movement in the States, a strong dose of appeasement and anti-Semitism, and there were more than a few French admirers of Hitler's scorched earth Jewish policies. And as for the Resistance, the Maquis itself was never organized into any unified chain of command, it was bitterly factionalized and fragmented, the Communists, the Free French, fugitives and draft dodgers and deserters. Lines of authority were disputed, one partisan group was as likely to rat out rival operations to the Vichy milice or the Wehrmacht military police as not.


How do you accommodate your occupier? Good question. We can look at Alan Furst's novels about wartime Paris and get a flavor of what it might be like, daily life in a captive capital. The World at Night, as it happens, is about the French movie biz, even, during the war, and how it was subject to German censorship. More accurately, pictures that didn't fit the bill simply weren't approved - were never greenlighted - so censorship, in that sense, before the fact. What do we make of the real-life example of Danielle Darrieux? When the Germans took Paris, in June of 1940, she'd just turned twenty-three, and her 30th film had been released, Battement de Coeur. I'm not making excuses for her, but twenty-three? In the movies since she was thirteen? Maybe she was a sheltered princess. We suspect, though, that she was a pretty savvy gal. She'd gone to Hollywood the year before, and made The Rage of Paris with Douglas Fairbanks, Jr. She was a bankable star, and the German movie industry understood both market value and how useful pictures were in the climate of opinion. Alfred Greven, the Nazi film czar in France, supposedly offered Darrieux a deal. She'd stay and make movies, they wouldn't send her brother to Germany as slave labor.

Blackmail puts a sifgnificantly different complexion on things. You give in the once, you're on the hook for more. The hole only gets deeper. Danielle divorces her husband Henri Decoin, who directed her in half a dozen pictures, and falls for the Dominican playboy Porfirio Rubirosa. (Army officer, diplomat, bag man, race car driver, and polo player, a favorite of the dictator Rafael Trujillo, he's usually characterized as the 'notorious' Porfirio Rubirosa - and the model for Dax Xenos, in Harold Robbins' novel The Adventurers. A whole other story, there.) Rubirosa fell foul of the Occupation authorities because he made no secret of his anti-Nazi sympathies, and they put him under house arrest in Germany. Danielle gets him sprung by agreeing to a publicity tour in Berlin. When next heard of, the two of them have managed to get to Switzerland, and they spend the rest of the war there. 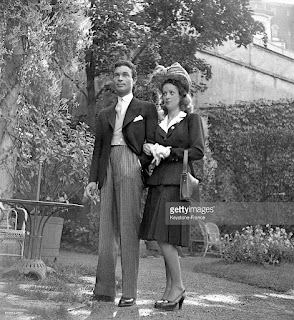 In other words, we've definitely got some missing pieces along the way. Maybe it was all very ordinary, or maybe it was one hair's-breadth escape after another. Again, a nod to Alan Furst. I'm thinking Mission to Paris. But the story reminds me even more strongly of the Andre Cayyate movie Passage du Rhin - released in the U.S. in 1960 as Tomorrow Is My Turn, a truly cheesy title. (Cayatte directed Darrieux in 1942's La Fausse Maitresse, made under the German film industry's wartime sponsorship.)

Cayatte's picture is about two French soldiers, taken prisoner by the Wehrmacht at the beginning of the war and sent to work on a German farm. One of them (Georges Riviere) seduces the farmer's daughter and escapes to France. The other one (Charles Aznavour) stays at the farm. Back home, Georges takes up sabotage work with the Resistance, but he's eventually sold out to the Germans. A last-minute reprieve saves him from the firing squad, and then Paris is liberated. Charles is repatriated, and takes up where he left off, working as a baker, bullied by his wife. Charles goes to Georges and confesses he's miserable, Georges agrees to take Charles back to the German border. Charles crosses the bridge over the Rhine, stepping into an uncertain future, and meanwhile, the clouded past catches up with Georges. His girlfriend was sleeping with a high-ranking German officer during the Occupation, and he kept Georges from being shot. When the truth comes out, Georges' record as a war hero will be ridiculed, his girlfriend a German whore. She has to leave him. Fade-out on the two men at the Rhine bridge.

Okay, the summary makes it sound stupid, but it's not. It's about loyalties, and betrayals, and compromise, honor and shame, love and deceit, the whole nine yards, and the kind of thing French pictures are really good at. For our purposes, it's a late-breaking discussion (fifteen years after the fact) of questions the French preferred to turn a blind eye to, wartime derelictions. There's no denying some people showed incredible bravery, and some people were utterly contemptible, but a fair number were probably just trying to get by. It's a variation, or the obverse, of the Good German. 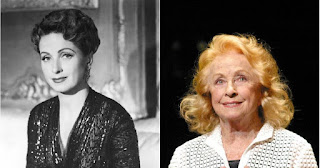 I don't know what the moral is, or even if there is one. I suspect people play the hand they're dealt, and some of us rise to the occasion better than others. Darrieux didn't embarrass herself. Maurice Chevalier, Jean Cocteau, Sacha Guitry? A little less honorable. Arletty, whose acting career flourished during the Occupation, most famously Les Enfants du Paradis, got jail time for sleeping with the enemy. ("My heart is French, but my ass is international," she later remarked.) Sartre, who wrote for the underground paper Combat, says, "Everything we did was equivocal." Not to put too fine a point on it, pretty much everything they did was self-serving.

David Bell, reviewing Alan Riding's book about Paris during the Occupation, And the Show Went On, reminds us that the French basically lucked out, compared to what was going on in, say, Poland. French artists and intellectuals suffered chaos, and scarcities, and many dangers. But more than a few prospered. And most of them survived to argue about it another day. [The New Republic, 03-03-2011]

It's instructive, I guess, that I'm still raking over the coals myself. We simply don't know how we'd react in a claustrophobic climate of fear, which makes it harder to judge what they did. When you hear the tumbrels passing in the street, you don't want them stopping at your door.
Posted by David Edgerley Gates at 00:00

In my research writing DEATH ANGELS (a novel about the OSS and French resistance fighters) I learned the depth of Coco Chanel's collaboration with the Nazis. She was vehemently anti-Semetic, had a Nazi lover, and was associated with the Abwehr, German military intelligence. Disheartening as I've always admired Coco Chanel.

A thoughtful piece. If you haven't seen The Sorrow and The Pity, the documentary about wartime France I think you would find it remarkable.

Interesting post. I read a recent book that takes place during the Occupation, called The Nightingale. Highly recommend it, particularly if you're interested in how the Occupation and resistance affected women.

David, another insightful look into history and the actions of humans.

A great book on the equivocal nature of just about everyone under the Occupation is the non-fiction "Marianne in Chains" by Robert Gildea (history professor, Oxford University). It covers wartime provincial France, and there's (barely) a hero among them.

The basic question is, "What would you do to stay alive and [relatively] safe?) And the true answer for most is, "Anything. Especially if I can keep a shred of dignity in the process. Or pretend that everything is sort of normal."

I read this earlier today and have been thinking about it. Some French films I really like and others leave me feeling I'd been sentenced to two hours in a prison ward. For example, my friend Micheline (one-time researcher for RT Lawton), claims her favorite film is Les Liaisons dangereuses. She even thought the American version was quite passable. Me… I guess I'm not that cynical. Ah well.

One of my favorite plays is Jean Anouilh's Antigone. It is, of course, an updating of Sophocles play. It is mostly an argument between King Creon, representing authority, and his niece Antigone arguing for freedom of conscience. (I'm simplifying, of course).

The play premiered in Paris in 1944, which means it had to be approved by the German censors. They had no trouble with it because they saw Creon as the winner of the argument. The French, of course, saw it differently.