"To Kill or Not to Kill" was the intended title of this column. The topic was how to end a series since I'd just launched the eighth Callie Parrish mystery. thinking it might be Callie's final adventure. 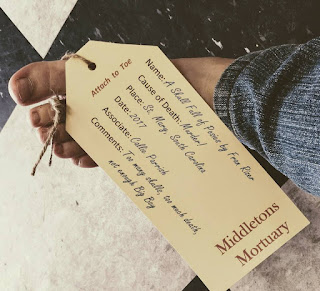 I took the long way home from the launch and something happened that changed my mind about what to write.  I passed a familiar house.

This house was flipped back in 2010, but it's changed hands frequently since then. How much do the current residents know about the place?  Property values are based on more than location and physical condition. Real estate can be stigmatized by such things as phenomena stigma, public stigma, and murder/suicide stigma. This house would be classified as stigmatized.

Phenomena stigma refers to property "known to be haunted."  One famous case about this is Stambovsky v. Ackley.  Stambovsky sued Ackley because he bought property without knowing it had been featured in magazines as haunted.  He claimed this decreased the value and made the sale fraudulent.  The final decision in that case didn't determine the validity of the haunting, but the court did void the contract and refund Stambovsky's down payment.

Murder/suicide stigma refers to property with decreased value because a murder or suicide has occurred there.  Milliken v. Jacono dealt with Milliken paying full value to Jacono for a house Jacono had bought far below market value because it had been the scene of a gruesome murder/suicide.  Randall Bell, a consultant on this case, had been involved in marketing the condo where Nicole Brown Simpson and Ronald Goldman were killed as well as the Ramsey home where Jon Bonet died.

Jacono claimed Milliken should have researched the property before he bought it.  Milliken claimed he'd been cheated.  The court determined it would be impossible to determine the degree of loss of value from a murder or suicide in a home. Would it be greater based on the degree of violence of the murder? Would an ax killing decrease value more than a poisoning? They ruled in favor of Jacono. essentially "buyer beware." Perhaps prospective buyers should have structures inspected for termites and call Ghost Busters. Since then, many states now have laws requiring sellers to reveal murder/suicide property stigmas.

To me, the house on Long Island where a man killed his parents and four siblings claiming "voices in the house" told him to do it, would be a case of both phenomena stigma and murder stigma, but when the situation is so well-known, there's a special name for it: public stigma.  Made famous as the Amityville Horror, this house is the perfect example of public stigmatized property in which the stigma is widely known. Another example is the home of the Menendez brothers.

In The Invention of Murder, Judith Flanders says, "Crime, especially murder, is very pleasant to think about in the abstract . . . to know that murder is possible, just not here." Flanders spends 555 pages telling how people in the 1800s satisfied their fascination with murder through serialized handbills, tours of murder sites (both real and simulated), and stage plays. That fascination remains.  It's evidenced in books, movies, and television shows from Murder She Wrote through How it Really Happened to Forensic Files (where insomniacs can watch murder after murder all night long.)

I've been reading murder mysteries since childhood, but in 2009 my lifelong best friend was brutally beaten to death during an in-home invasion.  Her death brought the harsh, painful realization that murder in reality is far different from fiction or even true crime books. I was asked after her death if I would write about her homicide. The answer was and remains an emphatic "NO!" When I discussed this SleuthSayers column with a friend, he asked, "Would you live in a stigmatized home?"

After my friend's death, I helped her daughter with the house.  That's when I learned that law enforcement officers don't tidy up after themselves.  I cleaned the black fingerprint powder off my friend's headboard and other furniture. Could I live in her house?  I wouldn't want to because it would be a constant reminder of the sadness of her loss.  Would I live in another stigmatized home?  I don't really know.

Thoughts of stigmatized property rose from passing my friend's house on the way home from my most recent launch.  Suddenly Callie popped into my mind with an idea for a ninth Callie Parrish mystery. It will involve stigmatized property but will not be about my friend or her home. I'll probably be back in a year or so to tell you about it.

How about you?  Would you live in a stigmatized house?