How I Wrote THE BIG REWIND


by Libby Cudmore
Welcome Libby Cudmore. She’s the author of The Big Rewind (William Morrow, 2016) which received a Starred Review from Kirkus, as well as praise from Booklist, Publisher's Weekly and USA Today. Her work has been published in Beat to a Pulp, The Stoneslide Corrective, PANK, The Big Click and the anthologies Hanzai Japan, Welcome Home and Mixed Up. She is a frequent contributor to Vinyl Me Please, Paste, Albumism and the Barrelhouse blog, and hosts the weekly #RecordSaturday.

Meanwhile, she answers those forever questions… How do you get your ideas? How do you bring them to fruition?

You can live-tweet her @libbycudmore.

I spent the first few years of my crime writing career trying to emulate others. With The Long Goodbye, Sin City and a soundtrack of early Tom Waits albums as my bibles, my early stories dripped with pulp pastiche like a half-scabbed wound.  I was successful to some degree—short stories published across the internet, some awards and notoriety, a few close calls with agents and editors, but with three novel manuscripts wasting away on my hard drive, I knew I had to try something different.

The Big Rewind didn’t come to me as a fully-formed plan. Rather, it came as an exercise in late-winter nostalgia, on the bus home from work, listening to songs that an unrequited college crush had given to me on a mix CD. I got thinking about the mix CD as a piece of ephemera, wondering what someone might think of the relationship between us if they were to find this document 200 years down the road. I began to write a scene where a young woman, named Jett Bennett, came across a tape meant for her downstairs neighbor, KitKat, and goes to return it. But because I am me, and because I have a background in crime fiction, there had to be a dead body, and that dead body turned out to be KitKat’s. 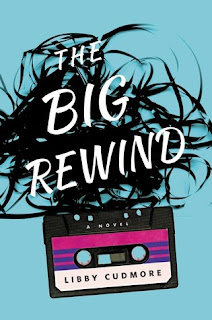 I then realized that I had stumbled upon the greatest idea I had ever had.

It was a great idea because I was able to write it from my heart. I was able to create a modern, likable protagonist with none of the worn clichés of the genre. And where there were conventions—the fact that she works for a private investigator as a temp—I was able to playfully twist those conventions to tell a story that felt true to me. Not to someone else. Yes, there are references to Raymond Chandler and The Shield, but I was able to look at the tools I had been given and use them to build something of my own design.

The book came together in about eight months, writing just a few hours a day, often doing my first drafts in a notebook on the bus and then typing those into the document at night. It was fun finding a voice for Jett, building her a world instead of trying to stuff her into someone else’s variation of New York or LA. Age had made me weary of violence, so I let myself have fun, keeping the book as lighthearted and generous as a murder mystery can be. And I was able to weave in my second love, that is, music. With references to Warren Zevon, The Vapors, Steely Dan and countless others, I shared my love of music with the reader, a narrative mix tape. 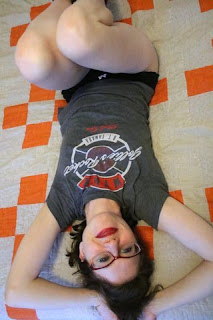 (FUN FACT: After the book was released, The Vapors, best known for their hit “Turning Japanese,” reunited. They have been playing gigs around the UK ever since. I’m not taking credit for this, buuuuut…)

And when I was finished, I cold-queried Jim McCarthy at Dystel, Goderich & Bourret Literary Management, and he agreed to take me on as a client. Another quick polish and it was off to William Morrow, where editor Chelsey Emmelheintz acquired the book for publication in Feb. 2016. It received a starred review from Kirkus, as well as praise from Publisher’s Weekly, Booklist and USA Today.

One of the hardest parts of writing is finding your own voice. It’s easy to play in someone else’s sandbox because they’ve already done the hard work. But it is important to dig deeper, to find a narrative that is meaningful to you as a writer and as a reader.
Posted by Libby Cudmore at 00:01