by Leigh Lundin
My SleuthSayers colleagues became a comforting presence as Florida braced for a hurricane that had already killed 800 people in Haiti. Fortunately my area was spared with little more damage than downed limbs and a 13-hour loss of power.

Fixed in my mind was 2004 when four major hurricanes attacked Florida. Three of them impacted me personally but I came out of them with the most important thing, bodily intact.

One other positive grew out of the devastation. Enduring endless hours without electricity, with canyons lined with debris and so many fallen trees that roads remained blocked for days and weeks, I began to write.

For this Hurricane Matthew, preparations included food, water, batteries, and propane for cooking on the grill with my friend Thrush. About the time SleuthSayers started, fellow mystery author Susan Slater moved from New Mexico to St. Augustine two miles from the ocean, well within reach of the winds and surge zone. She retreated to stay with friends on higher ground. Another friend and writer, Claire Poulsen, abandoned Amelia Island for the safety of a cabin in North Carolina.

But when I think of hurricanes, I don’t think of my own experiences, fortunately dreadfully dull. Instead, other efforts come to mind.

During construction, hurricanes struck in the late 1800s, then again in 1906 and 1909. I have been unable to identify the date, but one of the stories involved a rescue train chased by a ’cane that didn’t take the time to turn around. The train raced up the coast backwards to avoid the deadly winds.

In testament to the careful planning and design, the current US 1 Overseas Highway is partly built on footings constructed more than a century ago. The FECR sold the right-of-way to the State of Florida for pennies on the dollar following the deadly Labor Day Hurricane of 1935, the one described by Lionel Barrymore in Key Largo.

The incredible engineering of a century ago was brought home in a personally observed way. Disney Cruise Line leases Castaway Cay (formerly Gordo Cay) from the Bahamian government. In taking over the private island, Disney built a pier its ships can sidle against so that passengers can come and go using gangways rather than tenders.

In 1999, Hurricane Floyd swept through the Bahamas. Disney evacuated the island of the few dozen resident cast members (employees). It was with trepidation a team returned to the island where they found two surprises.

The buildings remained largely intact and most of the wind destruction involved little more than shingles and lounge chairs. The real surprise was the pier. That massive hunk of concrete and steel twisted up out of the seabed like a bitter joke. The storm surge made a mockery of our so-called ‘modern’ construction. Whereas hundreds of Flagler’s railroad foundations remain intact today, this present-day foundation ended up junk.

On 26 October 1998, I joined a consulting project with shore-based operations of Disney Cruise Line. The people I worked with were experienced ship’s officers, mostly captains extensively recruited from Europe and the US Coast Guard, plus a couple of South Africans and Australians. Unlike me, the other members were professional seamen.

The same day I started my job, Tropical Storm Mitch became Category 5 Hurricane Mitch heading toward Honduras. Unleashing twenty days of hell, it would become one of the most unpredictable of cyclonic storms, wreaking devastation through Central America, slugging Florida, then sailing across the Atlantic where it slapped the British Isles and Iceland. It would take 9000 lives, mostly in Central America. Thirty-one of those lives became of special interest. 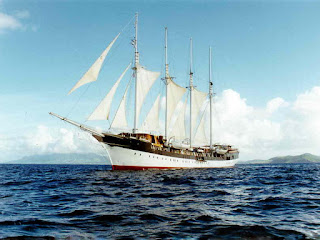 The Fantôme (The Phantom)

The four-masted, steel-hulled Fantôme was a beautiful ship with a fascinating history. Purchased in 1927 by the Duke of Westminster, it was later acquired by the Guinness family. At the outbreak of WW-II, Ernest Guinness docked her in Seattle. There it remained until 1953 because of unpaid fees and taxes.

Aristotle Onassis, who would later marry Jackie Kennedy, purchased the yacht, renovated it, intending it as a wedding gift for Grace Kelly and Prince Rainier of Monaco. Gossip says the couple omitted Onassis from their guest list, forfeiting the lovely present. In 1969, the owner of Windjammer Cruises swapped a freighter for the schooner and spent another fortune, reportedly $6-million, refurbishing it as the Windjammer flagship.

On 25 October, TS Mitch, a thousand miles distant, grew in strength and changed course toward Jamaica. As a precaution, Captain Guyan March dropped off the one-hundred passengers and ten non-essential crew at Belize City.

Based upon the latest models and frankly unpredictable storm path estimates, March headed north. The hurricane stopped dead. Then it turned. The Fantôme reversed south in efforts to dodge the onrushing storm apparently driving toward the Yucatán. The captain intended to shelter in the lee of Roatan, but Category 5 Mitch with winds of 300kmph (185mph, 162 knots) veered magnetically toward the ship. A desperate Fantôme turned eastward toward the open sea.

In the Disney Cruise Line offices in Celebration, Florida, the European staff had set up an espresso machine with a number of flavored syrups to supplement the coffee maker. The coffee station contained one other instrument, a shortwave radio.

Upon arrival, I found the professionals gathered around coffee and charts. While tracking the hurricane and the Fantôme, they listened in on the cat-and-mouse playing out in the wavebands of the radio, the coast guards in the flat tones of men aware lives were at stake.

The hurricane picked up her skirts, exchanging eye-wall speeds of 250kmph (155mph, 135 knots) for forward motion. About 16:30 on the 27th, the Fantôme relayed her position. As the storm center approached the vessel, the Fantôme radioed she was fighting winds of 100 knots and four-storey high seas. Five o’clock approached. Few standing around the radio moved to go home.

And then nothing. Silence. Not silence, but a repeating call into the abyss.

Through the next day. And the next.

On 2 November as Mitch took aim at Florida, the British destroyer HMS Sheffield found life-preservers and rafts bearing the stamp S/V Fantôme floating off the coast of Guanaja.

The beautiful Phantom had vanished.
Posted by Leigh Lundin at 01:34